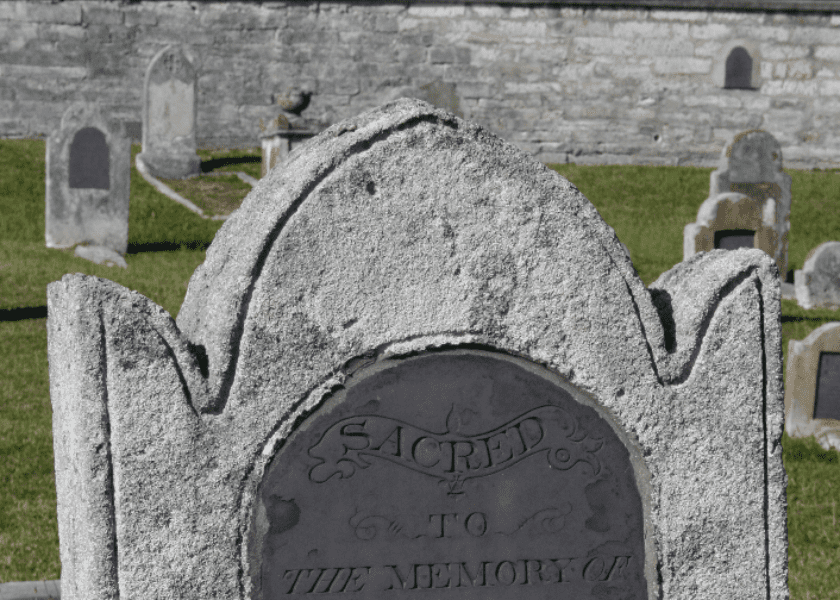 More than just a place to get your spook on, cemeteries are peaceful, beautiful places where you can learn about the lives of people from Bermuda’s past.

St George’s Military Cemeteries, Grenadier Lane and Secretary Road
This was once a part of the St George’s Garrison, the earliest establishment of the British Army in Bermuda. The Grenadier Lane cemetery is primarily a burial ground for victims of the yellow fever epidemics of 1830-1870, there are 256 memorial sites and the names of 539 individuals appear on the memorials. There are three main monuments for those in the Royal Artillery, the Royal Sappers & Miners and the Queen’s Regiment. In around 1870, the cemetery was presumably closed when the new military cemetery on Cemetery Hill, Secretary Road was opened. The Secretary Road cemetery is about a 15-minute walk away and is on a beautiful site that overlooks Murray’s Anchorage. Markers on the main pathway denote the areas for the Church of England and Roman Catholics. You’ll find the cemetery is divided into two sections with a Bermuda stone wall: the eastern side with civil burials and the western with the military. If you look closely you’ll see that some have ended up on the wrong sides of the wall!

St. Peter’s Church and Burial Ground for Slaves & Free Blacks, York Street, Town Of St. George
St Peter’s is the oldest Anglican Church outside the British Isles and the oldest Protestant church in continuous use in the New World. The churchyard, therefore, has an abundance of history to tell. The graveyard contains many layers of graves and today the ground is significantly higher than in the past. The yellow fever victims put tremendous pressure on local graveyards and after the epidemic of 1853, this churchyard was closed permanently. There is a separate walled section in the western part of the churchyard where you’ll discover headstones of buried enslaved and free blacks. A bronze plaque created by Bermudian sculptor Carlos Dowling denotes this today. There are 183 different graves that have been identified. Based on the inscriptions legible today black people were buried here from 1745 to 1853. However, there could be many graves with no record or inscription that falls out of this time frame. This separate burial site is a vivid reminder of Bermuda’s history and role and in the Transatlantic African Slave Trade.

Hayward Family Burial Ground, Emily’s Bay Lane, St. David’s
Tucked in behind Bay House, this walled family graveyard was gifted to the Bermuda National Trust by Howard Smith. It contains a few raised tombs and some beautifully inscribed plaques in memory of members of the Hayward family. Two of the graves are thought to be those of Martha Hayward and her husband Lieutenant William Lang whose romance lives in Bermuda’s legend books. Lang served with the 46th Regiment of Foot under Lord Cornwallis in the American Revolution. When he was stationed in Bermuda, Lang visited Hayward’s family home on business and was blown away by the beautiful daughter Martha. It was love at first sight; and without Martha’s father’s knowledge, they married at St. Peter’s Church. William Lang is credited with bringing the first peach seeds from Madeira and there is a large peach tree growing over the western side of the graveyard to this day.

Ferry Point Military Cemetery & Ferry Reach Cemetery, Ferry Road, St. George’s
Close to the house at the end of Ferry Point, the small Ferry Point Military Cemetery is now just a walled area with no visible memorials. In 1782 barracks had been built near the site of the Ferry Point Cemetery and the walled area was where livestock had been kept. It had varied uses over the years: it was the site of a cockfight in 1785, a cemetery by the early 19th century and later it became a garden. Those buried here would have been soldiers of the British Garrison who were encamped here and would have died in the yellow fever epidemic in 1853. The Ferry Reach Military Cemetery can be found just off the Railway Trail overlooking the North Shore to the east of Whalebone Bay. It has a large cross and two other memorials to commemorate soldiers from the 2nd Battalion 2nd Queen’s Royal Regiment who died during the yellow fever epidemic of 1864. It was established later and may have been a result of both the Ferry Point Cemetery being full due to the high death rate of the 56th Regiment and a growing awareness that it was better to locate yellow fever cemeteries further away from places of habitation.