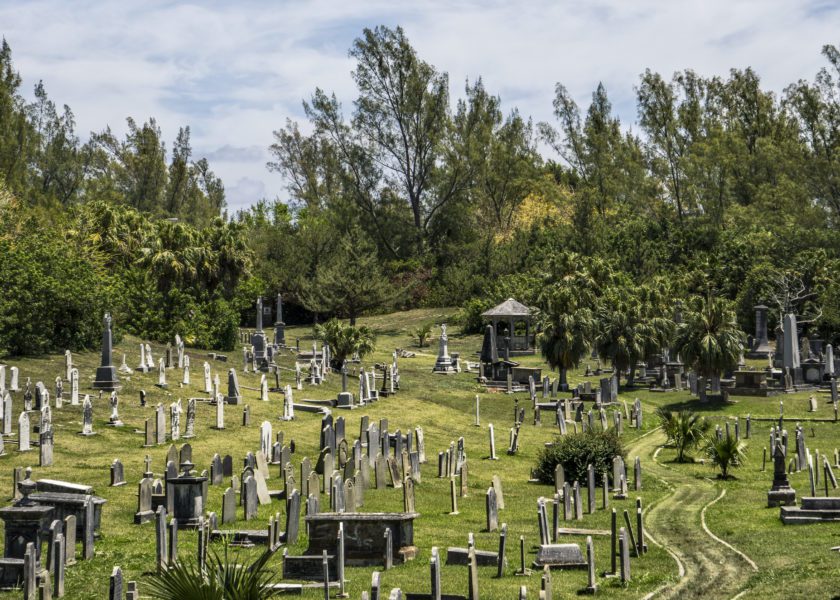 Discover the Bermuda National Trust Cemeteries of the West

Learn about Bermuda’s history from the headstones at these four Bermuda National Trust cemeteries.

Royal Naval Cemetery –  Malabar Road, Ireland Island, Sandys
This large cemetery of 2.73 acres is known as ‘The Glade’ and contains around 866 graves belonging to persons that held different ranks of the British Forces. Ireland Island was bought by the Admiralty in 1809 and the cemetery consecrated in 1812. Originally open to all, as it began to expand, the kinds of people who could be buried there became specific. By 1853 only residents of Ireland Island and Royal Naval personnel and could be interred at the Royal Naval Cemetery. Once there, you’ll spy the ‘Oration Stand’ which is where the speech at a funeral was given from. See if you can find the oldest gravestone that is still legible: Sergeant John Kitchener, late Royal Marines, who died in 1816. This cemetery is located between Malabar Road and Craddock Road, by Parson’s Bay across the widest point of Ireland Island. Take Malabar Road, the main road to Dockyard, which passes the north-west end and from where the cemetery is visible.

Convict Cemetery – Cochrane Road, Ireland Island, Sandys
This little cemetery had a short span of use with the thirteen visible graves dating from 1843 to 1846. We know that by 1898 the cemetery was no longer used because cartographer Lieutenant AJ Savage marked it ‘disused’ on his survey map of that year. The cemetery gets its name from two of the men buried there: In the 19th century, it was common for convicts to be sent to colonies like Bermuda to serve their sentence labouring on British forts. The dates on the graves tie in with the arrival of the first convicts, which were brought to Bermuda from England in 1824 on HMS Antelope. Of the 9,000 convicts sent here, 2,000 died. You’ll find this spot hidden at the west end of Cochrane Road, off Malabar Road.

Somerset Military Cemetery – Mangrove Bay Road, Somerset
Looking out onto Mangrove Bay, this is a peaceful final resting place for those who gave their lives in service, particularly during the First World War. It was consecrated in 1903 with the earliest remaining memorial dating 1904 and the most recent 1918. Though there are only 21 visible graves, records indicate that many more people are interred at this site. You’ll find 13 headstones which are Commonwealth War Graves Commission headstones commemorating West Indians and Canadian soldiers and three Bermudians of the Bermuda Militia Artillery who served in the First World War. Nearby there is a monument to the memory of soldiers from the 4th Battalion British West Indies Regiment, who died in Bermuda of pneumonia in 1916. Somerset Military Cemetary is located off of Mangrove Bay Road (when traveling from Somerset Village to Dockyard) immediately west of Watford Bridge behind the bus stop.

Watford Cemetery – Malabar Road, Watford Island, Sandys
In the early 1800s, Watford Island was used as a burial ground for labourers who helped build Dockyard between 1824 and 1863. The mortality rate from dysentery and yellow fever was high due to living in dirty crowded conditions on hulks of ships moored just offshore. In 1855 it was reported that Watford Island had received 458 bodies and was almost full. For the following years, those who died were buried on Long Island. Tablets commemorating individual convicts are rare which is perhaps because their graves were usually marked with wooden crosses. This cemetery was created in 1887 as a graveyard for soldiers and their families and contains the memorials dating from 1853-1899. Following 1899 the cemetery continued to take shape. In 1925 the remaining few memorials were taken from other parts of the island and placed together along the north-eastern wall of the military cemetery. A memorial for the Queen’s Regiment soldiers who died of yellow fever in 1864 was relocated from Boaz Island in 1980.  After Hurricane Fabian exposed the remains of five men, they were reburied in a single grave within the walled cemetery on November 5th, 2004. You can visit the cemetery on the right going to Royal Naval Dockyard immediately after crossing Watford Bridge, hidden at end of a footpath from the car park.

These properties are free to visit and are open dawn to dusk. Call the Bermuda National Trust on 236-6483 for more information.