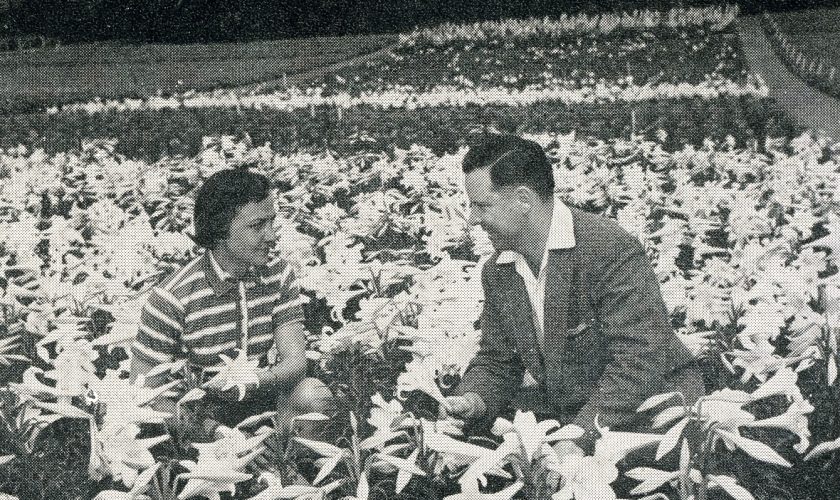 Written by: Richard B. Smith

This article was taken from our archives. It first appeared in the May 1946 issue of The Bermudian. It appears here exactly as it did originally.

Once again, this year, those fortunate enough to be able to vacation in Bermuda during the period preceding Easter have had the opportunity to bicycle alone the Island lanes and see the snow white fields of Easter lilies bordered with hedges of cedar and oleanders. At the Easter season, wherever one goes in the Colony, the unbelievably lovely white fields are on every side, for lily growing is the largest industry in Bermuda, outside of accommodating vacationists.

The miniature vacation resort of Bermuda, situated on the edge of the Gulf Stream, only 666 miles from New York and 2.5 hours by Pan American Clipper, is the source of all the Bermuda variety of lilies, although most of the lovely blooms never leave the Islands. Actually, the flowers are a “by-product” of Bermuda’s part in the lily business, for it is here that the bulbs are grown which are later shipped to the U.S.A to be raised in hot houses during the winter and to supply the demand for Easter lilies in the Spring. Some flowers are sent from Bermuda to the U.S.A. and Canada by visitors to the islands, and the Bermuda Government, which is justly proud of her lilies, sends out some as a special form of Easter card; but of course this “souvenir trade” is very small compared to the real business of shipping bulbs to the florists who grow the bulk of the flowers in the States. It is this fact that makes Bermuda’s lily fields so lovely for, the flowers that are shipped from here have to be shipped long before the buds are open, and long before the lilies have reached their greatest state of development and beauty. But the fields that one sees on every side are not stripped of their blooms until after they have opened, allowing the lily fields to attain their full glory. The visitor can be thankful that Bermuda’s growers are primarily in the bulb business and not that of shipping flowers.

The Bermuda Easter lily is recognized as the Queen of the white flowering lilies all over the world. There are other varieties which have their virtues, but none have the perfection of form to equal the Bermuda variety. One of the most keenly contested events in all flower shows are those between the growers of Bermuda lilies, both amateurs and professionals. To one of Bermuda’s growers goes the credit for having won first prize at twenty consecutive International flower shows in New York.

As the growing of Bermuda’s Easter lily bulbs has become a bigger and bigger business, the careful methods of cultivation have been improved upon, year after year. At the present time every field is subjected to three rigid field inspections and any plant not up to the proper standards are removed. The absence of blights and diseases are the trueness of type of Bermuda’s lilies are the goal of every grower and the standard of perfections is constantly being raised.

Various new strains and varieties are being developed all the time. A Bermudian, Howard Smith, developed the Howardii variety, which blooms earlier than the older Harisii. This has been a great boom to both the growers in Bermuda, and especially to the buyers of bulbs in the States. Depending on the date of Easter, whether it is early or late, bulbs which are ordered during the previous summer, when they are dug up and shipped, can be ordered in accordance with which variety is best going to fill their demand. All the larger growers are experimenting constantly with new varieties, the hope of finding a new strain that is better, or that incorporates some virtue that other varieties do not have.

One such new type lily, developed by Howard Smith, who grew the original Howardii lily, is a type he calls “Curley”. This bloom, instead of having the straight and very symmetrical form of the conventional variety, has a spiral or curly petal making a very curious effect. Although not expected to replace the conventional type, it is expected that there will in time be a demand for this type, as a curious and different type.

In the days before the war there was keen competition among amateurs, especially among the wealthier gardeners, who vied with each other to produce the most perfect and flawless blooms. It is hoped by the Bermuda growers that this rivalry will again revive with the end of the war, as they derived great benefit in the way of improvements in the cultivation of lilies which produced a degree of perfection that commercial growers could never hope to achieve.

It has amazed and horrified many of Bermuda’s visitors in prewar years to see a gorgeous white field of Easter lilies one day and to pass it again the next and see it stripped of its flowers and blooms rotting in a heap at the side of the field. This must be done for two reasons. In the first place when the blooms are stripped off the stalks, the strength that would otherwise have gone into the bloom goes into the bulb, improving and strengthening it. The other consideration is the fact that as soon as the bloom has opened, it presents far more resistance to the wind, and a heavy wind can break off the stems or at least upset the rooting of the bulb and do untold damage. This is the reason why so many fields are bordered by cedar trees and by hedges of pink oleanders which grow to a considerable height and form an ideal windbreak. When these pink oleanders burst into bloom at the same time as white lilies, it is a sight hard to equal anywhere.

Unlike so many other industries during the war years, the lily business in Bermuda has gained rather than lost during the recent conflict. Early in the war, St. David’s and Cooper’s Islands were taken over by the U.S. Army for the construction of Kindley Field where the clippers now land daily. These islands contained large areas under lily cultivation, and it was a year or two before other land could be brought under cultivation in lilies to offset this loss. At present the acreage planted in lilies is greater than ever before. Another aid to the Bermuda lily business has been the elimination of much of the competition from the inferior Japanese varieties. Some of these lilies are still raised in Mexico from bulbs imported from Japan before the war, but the number is small.

Actually the summer is the big season, for that is when the bulb crop is harvested, which is the important part of the lily business in Bermuda. It is during July that the bulbs are dug and packed in dry sand for shipment to the United States. Shipments of bulbs during the recent years show a steady increase during the war, although 1944 was slightly higher than 1945. It is expected that this year will show another healthy increase when the figures are in next Fall. The unit of shipment is the “case” and the average contents can be figured at some 200 bulbs. Thus in 1945, the shipment of 3783 cases means that over 750,000 bulbs were exported.

So when you come to Bermuda next spring, you too can see all those incredibly lovely white fields of Easter lilies and you can send some home by air express or you can enjoy them while you are here. But the charm of lilies in a vase can never equal the beauty of an Oleander bordered field, snow white in moonlight, and no one can realize without regret that to see a field in full bloom means that the blooms themselves, because they are opened, are doomed to destruction.