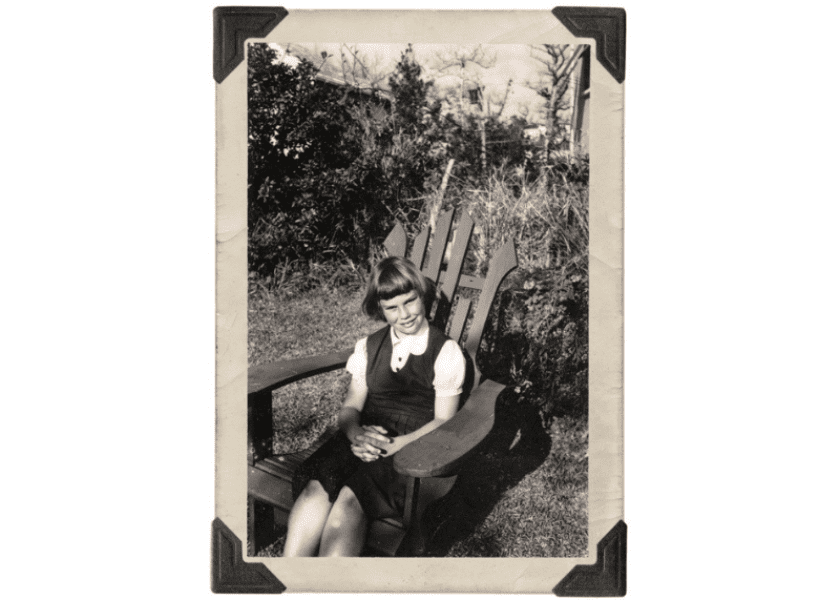 Where I Grew Up: Emma Ingham, Warwick Parish

This article comes from the Fall 2012 issue of the Bermudian. It appears here exactly as it did originally.

Emma Ingham’s first home was in Southampton, but the first house she remembers was Breezy Hollow on Cobb’s Hill Road. “The novelty of that,” she explains, “was if I stood in the middle of the road, on one side I’d be in Paget and on the other in Warwick.” The house was appropriately named because it was in a hollow off the Railway Trail. Her father, Ernest Field Ingham, owned three and a half acres of land, but he also rented arable land opposite Cobb’s Hill.

“Like most Bermudian men of that era,” she explains, “he could turn his hand to anything. He had a boat, which was principally a fishing boat, and he had little punts. In fact, we were taught to make punts in his workshop. He drove a taxi—T1666—and was connected with two hotels, Belmont Manor and Elbow Beach, for driving their guests.” He also worked full time for the Department of Agriculture and Fisheries. “He was responsible for moving the dead cedars after the cedar blight and for replanting the landscape with casuarinas. He worked closely with Gordon Groves and Jack King.”

He was, however, primarily a farmer, and he was helped by his wife, Joan Ingham (née Arnold), known in the neighbourhood as “the nice lady from England.” In addition to helping on the farm, she worked full time as a secretary to the headmaster of Warwick Academy and to British Airways, or B.O.A.C., as it was known at the time. Ernest kept over a hundred pigs, cows, ducks, chickens, pigeons, rabbits and guinea fowl—everything, Emma says, bar a horse. He even took care of the U.S. Air Force mascot goat. “It was their pride and joy. It had a 26-inch horn span and was quite a vicious thing. We had to scrub its back before it was entered into the Agricultural Exhibition.”

It was thanks to these animals that Emma’s childhood was not filled with leisure or much playtime with other schoolchildren. “There was so much work to do by necessity. In a farming household, you’re expected to be part of a team.” So she and her brother, David (born in 1948), fed and looked after some of the animals on the property. “There were pigs that could be nasty. You’d find them out of their sty. I used to go with my father to put them back.” She had a nicer relationship with one of the pigs. “We didn’t have a lot of money, so I didn’t have many dolls. There was a runt pig—I painted its toes—and it became my doll. I emptied my mother’s cedar chest of all the clothes and that was the pig’s crib!”

However, she doesn’t have fond memories of Muscovy ducks. “I’ve never come across any animal feathered or otherwise that would poop so much. It was my job to sweep all the poop off the walkway. My mother would look after the eggs. Ducks’ eggs were the preferred eggs for wedding cakes. She was always washing eggs.”

Newly hatched chicks were also a common sight in the kitchen. “We had to keep the little chicks alive by keeping them warm. My mother would put towels into pots on the stove. Then she’d put the chicks on the towels, leaving enough room between them for air to circulate. The noise you’d hear in the morning! They would trot around the kitchen.”

Because the Ingham children were responsible for feeding animals, interesting situations could develop at Warwick Academy where they went to school. “I had a pet heifer called Fanny, and one afternoon when I was in detention, the heifer and a bantam rooster came to the school quadrangle to find me because they were hungry. Mr. Lamacraft was headmaster at the time. He’d only been in the school six weeks. ‘Remove those beasts,’ he told me. I remember asking him, ‘Does that mean I’ve finished my detention?’”

In addition to keeping livestock, her father also grew for sale a range of vegetables and flowers (gladioli, snapdragons and “the most amazing” passionflowers in shades of white, pink and purple). “Looking back on it, we had a very healthy life, because we ate what was in the garden, what was too misshapen, too small or too big to sell.” She had her own garden where she also grew vegetables, string beans and carrots, which always grew crooked. “It was quite a challenge, because my father, being the disciplinarian he was…well, there was at least one meal a week for which I was supposed to provide vegetables, or at least one kind of vegetable for the table.”

Hurricanes, of course, meant extra activity on the farm. She particularly remembers the one in 1953. “We were always on our guard against hurricanes come the end of the summer and before going back to school. You could tell if there was going to be a storm. The shark oil indicated some big disturbance, and the animals became very restless. My father bred and sold hundreds of parakeets, and they went into their nests and wouldn’t come out. The pigeons found cover and nested lower than usual. The rabbits squealed. It was all quite alarming. My father had to bring the animals into the barns on the property, and we’d have to go out and feed them.

“I remember we were out of candles, so I had to hurry up to the local shop at the top of Cobb’s Hill. The shop was owned by Mrs. Smith, whose opening hours depended on the climate of the season. If it was hot, she’d have a nap in the afternoon, and we’d have to wait until she woke up. But she sold everything—meats and candy. Beautiful matches in extremely beautiful matchboxes, big balls of string. And candles.”

She remembers getting back with the candles and later watching the storm. “I could see someone’s roof sailing up Cobb’s Hill!” Their house withstood the storm, although their citrus trees were badly damaged.

Fortunately, hurricanes were not annual events, although the Agricultural Exhibition was. She remembers treats they were allowed on the day. “There was candy floss, which I always managed to get into my thick mop of hair! And glass and rock candy.

“The Agricultural Exhibition was a huge event in our household. We were always encouraged, by Mother more than anyone, to take part and do our best with whatever we had. It was a huge learning curve: the discipline, the teamwork, the sharing with people. My father’s pigs would compete with Harry Lindo’s. I still have a photo of my brother literally riding piggyback at one of the shows. But as children we entered everything we could. I don’t know how my mother put up with it, but she did. We helped her make breads and amazing chutneys and jams, green paw paw chutney, and Surinam cherry, guava jelly and all kinds of marmalades. Naturally, we were her tasters. And she won many firsts in the Exhibition for her entries.”

Emma herself learned to cook from an early age while her mother was working at Warwick Academy during the school holidays. “When you have lots of eggs and so on, you learn to cook!” Gingerbread was one of her first culinary accomplishments and also one of her first entries in the Exhibition. When she was about 12, she also learned to cook jellyroll, quiche, stews and a “wonderful” curry her mother had taught her. Her cooking skills were useful when she was required to cook breakfasts at her grandmother’s guesthouse on Woodbourne Avenue.

What about fun time and friends? She had responsibilities on the farm. “I was not allowed to go trotting off hither and yon. I tagged along with my brother’s friends, Peter Moran, Peter Breck and the Hurdle brothers, who were excellent footballers.”

Sometimes they used the farm produce for nefarious purposes. “There was an avocado tree at the corner of Cobb’s Hill and the railway right of way. Peter and my brother would hike up that tree at the rate of knots. I was left at the bottom to hand up to them mushy tomatoes, squishy potatoes and any other fruit or vegetable past its prime. My job was to check on the oncoming taxis with surrey
fringe tops or ones with absolutely no protection whatsoever. As the driver accelerated to get up to the other side of the hill, the customers would find themselves showered with vegetables and fruit.” The children were never caught, because the driver could only see the “innocent” little girl at the bottom of the tree.

Another escapade involved her brother with his “little army” of boys going into the Cobb’s Hill Gospel Church on Sundays and rolling watermelons down the aisles. Once again, they were never caught.

“There weren’t many amusements, so we made our own. Because my father helped the Department of Agriculture to move the dead cedars, we had lots of wood on the farm, and we used it to build forts. I had my own tree house.”

In the summer, they swam, of course, and fished off Darrell’s Wharf or Hudson’s Ferry or Salt Kettle. Their mother, a pacer for the Bermuda Olympic swimming team, would take them every Sunday in the summer to Simmons Beach (where the Golden Hind was subsequently built on South Shore). The real treat came at the end of the outing, when they bought vanilla ice cream with cream soda from Mr. Simmons’s Tearoom, which was on what is now known as Tearoom Lane. “You ate it in a cup,” she remembers. “It was the best thing ever.”

Emma learned to sew with Miss Rowling. “That was a fiasco. She told me I’d never make anything other than a dishrag. But in the end, I made all sorts of things out of cotton feed sacks. And I also made all my own clothes.” Given her love of art, it is no surprise that she also spent spare time drawing on whatever she could find. “I used toilet tissue paper,” she says. “It was wonderful stuff!”

She demonstrated her gift for art in homemade Christmas cards. “Every year I’d walk to the Friths, Olive and Leonard, who lived where the Bermuda College is now, to Loughlands and to the Paget Church to deliver the cards and Mother’s homemade cookies and golden Christmas cake, as well as her jams and chutneys.”

Looking back over her childhood, Emma realises she learned the importance of teamwork in succeeding in life. “My mother wanted us to know that to be generous in spirit is to lead a rewarding, rich life.”

Born January 10, 1946
During the early 1970s, Emma Ingham received the Byllee Lang Scholarship and other bursaries, allowing her to study art at Parsons School of Design in New York. For 20 years, she and her partner, Sue Harris, ran Harris and Mitchell, an advertising and communications agency. Now she paints and teaches in her studio on Featherbed Alley in St. George’s. In addition, she teaches art at the Senior Learning Centre for the Bermuda College and at the Bermuda Society of Arts in City Hall. A founding member of the Bermuda Arts Centre at Dockyard, she regularly contributes to art exhibitions held on the island.