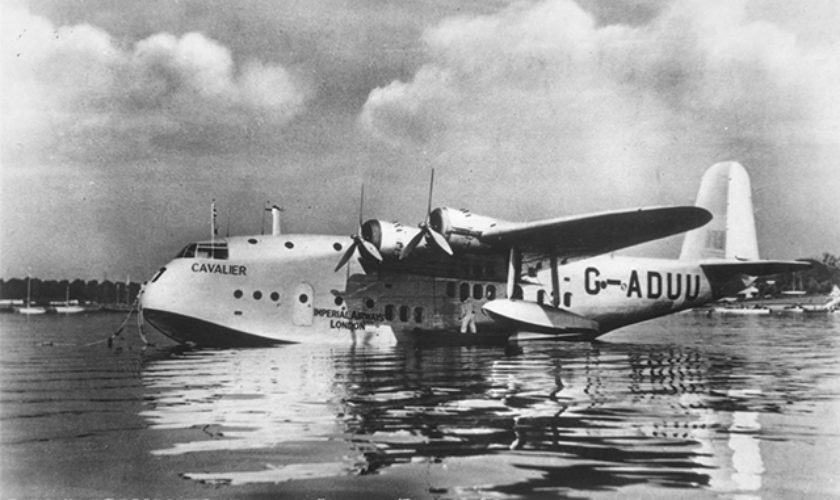 What was once a daring adventure is now something many Bermudians take for granted: transatlantic travel. As we kick off our shoes on BA’s wide-bodied Boeing 777, tilt the seat back and languidly don eye mask and headphones, London is a pleasant six hours away.

The 3,500-mile journey across open ocean seems effortless, a breeze. British Airways has refined the experience and rendered most of us happily oblivious to the fact that “crossing the pond” was once regarded as a formidable feat of aviation.

This year BA celebrates 80 years of service to Bermuda. The airline’s historic links to the island span some of the most tumultuous events of the twentieth century and take us back to an unaffected, pre-modern Bermuda that had yet to make its mark on the world. When the flights began, Bermudian women had yet to be given the vote, St. David’s was only just being connected to the rest of Bermuda by the Severn Bridge and islanders were celebrating, from afar, the coronation in England of King George VI.

Bermuda joined the dots for British pathfinders keen to open up South America and the Caribbean to European travellers. Having boldly spread their wings across Europe, Africa and southern Asia, Britain’s pioneering civil aviators of the 1930s saw the North Atlantic as their last great frontier.

The Cavalier packed into a wooden crate to be shipped from the U.K. to Bermuda.

“Bermuda was extremely important,” says BA historian Keith Hayward. “It was one of the main stops that helped us to extend our flights south, through the Caribbean and down the west coast of South America. Bermuda was an absolutely vital point on that route.”

Hayward volunteers at BA’s Speedbird Centre Heritage Collection at Harmondsworth, near Heathrow, which is open to visitors by appointment. It lovingly preserves the records and artifacts of British Airways and its predecessor companies BOAC, BEA, BSAA and the pre-war Imperial Airways.

It was Imperial that brought Bermuda into the frame in the summer of 1937—and in ingenious fashion. It’s Empire Flying Boat, the Cavalier, could not manage a transatlantic crossing but was able to make the relatively short hop between Bermuda and New York. So its parts were packed into wooden crates in the U.K., shipped to Bermuda aboard a steamer and then re-assembled on-island. The Cavalier flew Bermuda to New York and Imperial teamed up with Pan-Am, which ran a Sikorsky S-42 flying boat service from New York to Bermuda.

The feats of the flying boat pilots remain a source of inspiration to Keith Hayward. “They were certainly glamorous,” he says. “They landed not only in safe harbours, as they did in Bermuda, but also on lakes and rivers and open seas. You’d hear stories that over Africa, they would go down low to look at the wild game, or fly close to Victoria Falls.”

But who was flying to Bermuda in those days? “There would have been diplomats, bankers and financiers, though Bermuda was not the finance centre then it has become since,” explains Hayward’s fellow heritage centre volunteer, Jim Davies. “In those days, air travel was pretty much for business people and the rich and famous. So quite a select band of people used it, people who were comfortably off.”

“The range of the flying boats was limited,” Hayward explains, “but they were determined to beat the challenge of the Atlantic and so they modified a couple of the flying boats to re-fuel in the air.” Some re-fuelling trials (with no passengers on board) took place over the North Atlantic: “The flight engineer had to go into the extreme tail with a grappling hook, grab the fuel line and attach it. It would take half an hour transferring fuel and off he’d go. A lot of people think that flight re-fuelling was purely military after the war, but they were doing it in 1938.”

The flying boats proved to be cumbersome and in Bermuda, Hayward says, headwinds posed a real hazard: “Imagine landing on a glassy sea with very basic instruments; if you misjudged your height—disaster. If you catch a log or a piece of debris under a wing tip float, the aircraft could roll over and split open. It was very vulnerable. Nevertheless, it was an amazing aircraft.”

In 1945, BOAC started a post-war, thrice weekly service between Baltimore and Bermuda, using a Boeing 314 long-range flying boat, one of the largest aircraft of its time. In the fall of 1946, British South American Airways, another predecessor to BA, launched a fortnightly London–Azores–Bermuda– Jamaica–Caracas service. It was served by the Avro Lancastrian, a modified Lancaster bomber, with gun turrets replaced by streamlined metal fairings. These pioneering routes paved the way for the daily transatlantic flights that Bermudians use to this day.

The planes that serviced the island over the decades varied from the Lockheed Constellation of the 1950s to the Bristol Britannia of the 1960s and the Boeing 747s and Douglas DC10s of the 1980s, and BA’s loyalty to Bermuda never wavered. Models of these aircraft are featured at the heritage centre, alongside flight logs, cabin crew uniforms, books and travels posters. And it’s where we find Hayward, keenly sharing his wikipedic knowledge of all-things BA.

Now 88, the retiree worked for BA (and its predecessors) for 70 years in various capacities, and saw BOAC’s first commercial airliner take off from Heathrow on January 1, 1946. None of the historic paraphernalia here comes close to matching the value of his personal enthusiasm for his subject, and he is at his most ebullient when describing the trailblazing pilots who served the U.S. (and by extension, Bermuda) from England, back in the day: “In the early post-war period they were using very select crews, all ex-Bomber Command men, and they were known as The Atlantic Barons. And, as ground staff, they terrified us. We were virtually ignored.

“The challenge for those young captains, 25 or 26 years old, was to keep that Azores–Bermuda sector going despite those damn headwinds—remarkable! But they did it, and then, of course, we extended to Jamaica, Colombia, and down to Santiago. We opened it all up, and I am so proud of that. I was in ground ops at the time and feel so lucky that I was involved.

“When you think of those headwinds in Bermuda, the range problem and your tiny island, those were hardy pilots…they couldn’t have landed anywhere else, they couldn’t have reached America, they literally had nowhere else to go…but they made it, every time. One of them had to hold in a thunderstorm over Bermuda for four hours!”

Hayward continues: “Those pilots were at the extreme limits of their range in those days, flying to Bermuda. Once that decision was made, there was no turning back. Without the instruments they have these days—no weather ships to provide them with accurate weather forecasts, no long distance radar aids—it was basically astro-navigation, flying at night—flying by the stars, basically. That’s a very difficult navigational challenge. It was wonderful, pioneering flying and the Atlantic crews were held in very high esteem.”

The Atlantic Barons blazed a trail for all the crews who have served Bermuda since, and established a reputation among BA pilots— which still holds to this day—of being able to fearlessly land on the island no matter how adverse the weather conditions. “While I’m sure they have that reputation,” Davies concurs, “Safety is the key factor, it’s paramount. They won’t take chances, it’s key to our business.”

Davies, whose enthusiasm for his subject is every bit as infectious as that of his older colleague, joined BOAC in reservations in December 1966. He also worked in sales and spent time in the complaints department, a role his bosses would doubtless argue was his least taxing.

Asked about the importance of Bermuda in BA’s history, Davies said: “Bermuda is important because when the Cavalier came down from New York, it was a pioneering route. And also because it remains our key mid-Atlantic point given that we don’t go farther west, like we used to. It’s still a key part of our tourism market and our business market. And this is reflected by the daily route from Gatwick, the 2233 flight.”

Bermuda saw glamorous air travel reach its zenith when—on several occasions—Concorde touched down here, before it was taken out of service in 2003 after some 50,000 flights. The supersonic jet travelled at 1,354 mph, twice the speed of sound, and cut transatlantic travel times in half. BA’s Concorde flights to Bermuda were chartered out of New York. “I used to meet the Concorde flight in London,” recalls Hayward, “old ladies tottering down the steps, with wide faces and silly smiles. On a summer’s day going west you’d get to see two sunsets, one in London, one in New York. It was the most amazing aircraft; it cruised at 55,000 feet and when you looked out of the window the sky would be dark blue and you could see the curvature of the earth.”

So what might the future hold for BA and the Bermuda route? Pilotless aircraft, perhaps? “Who knows,” Hayward answers, with a smile. “The industry has developed so rapidly. In 1946 we had no idea even of jet planes coming along, let alone today’s long-range aircraft. From converted Lancaster bombers to Concorde to flying 300 people to Bermuda on a 777—the entire history in one person’s working life. Quite extraordinary.”

Davies has a soft spot for Bermuda, having taken his mother on vacation some years ago: “More recently I had the luck to go back, over Easter, and spent a couple of nights there. I did a tour around the island and it was very enjoyable. They greet you on the bus as you get on, which was very foreign to me; I normally just sit there with a newspaper.”

And was it a smooth flight? “Yes, it was delightful.”

British Airways is “very excited” about celebrating the 80th anniversary of flights between Bermuda and London. The airline’s Simon Brooks, Senior Vice President Commercial, North America, told The Bermudian: “It’s a very special time and we’re looking forward to celebrating with our customers, business partners and officials throughout the year. While the anniversary is in June—right during the America’s Cup— we are planning a number of celebrations and activities throughout the year to mark this anniversary. We’ve also been working with our Heritage Centre, based at Heathrow, on some milestones of the 80 years.”

Asked about his airline’s loyalty to the island, Brooks said: “Times have changed over the last 80 years—we no longer use flying boats or require stops in New York to reach Bermuda as we did with our first flight. Bermuda is incredibly important to us…We know how important this service is, from customers travelling to the UK on business or connecting to over 150 cities on our global network or
those visiting friends and family back home.”

While the anniversary invites us to look back, British Airways is also excited about what’s happening now and what lies ahead for passengers using the Bermuda flight: “Our new home at Gatwick South Terminal is now welcoming our customers, [with] our larger, brighter new lounge, an upgraded check-in area and the benefit of easier access from public transport.

“We will be targeting a £400m investment in our Club World (business class) product… We will be transforming food and drink, with a radical improvement in quality and presentation and more choice through the expansion of pre-order services. We’re focusing on sleep too—we know how important it is, particularly on night flights across the Atlantic. We will be introducing better soft products including new bedding and introducing a new ambience to maximise sleep.”

Brooks added: “This anniversary is a milestone in our history and we look forward to our association with Bermuda for another 80 years and more.”