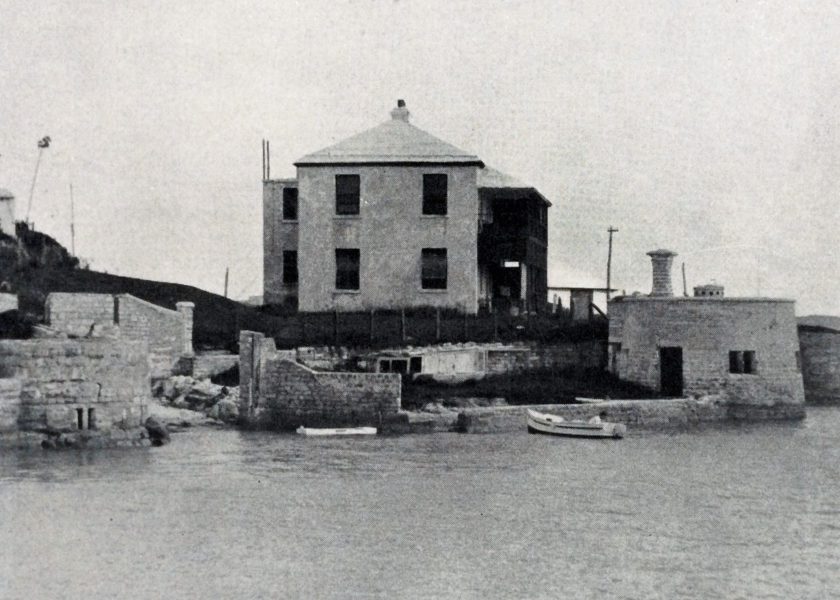 This article was taken from our archives. It first appeared in a 1933 issue of The Bermudian. It appears here exactly as it did originally.

In 1848 or thereabouts Boaz Island was acquired by the Admiralty and was converted into an English convict prison. Here deported felons were put to labour on Imperial works, building roads, naval barracks, and fortifications. Thousands of convicts were sent there, and the British Government at that time probably visualized it as similar to the famous French penitentiary at Devil’s Island.

Protruding in an arc into the sea on the south side between Watford and Boaz is a thick twelve-foot wall which was constructed by the prison authorities so that a bathing pool, accessible only from the land, was formed for the use of the convicts. On the far side of the enclosure is a sun-bleached tower even more incongruous than the other structures in the vicinity, for it appears to be a medieval donjon or castle keep. Here the armed guards kept watch over the convicts as they bathed in the gloomy pool. Several interesting legends attach to the place and sometimes individual escapes occurred…

Trowl Runs Afoul
Once a convict named Trowl broke away from a labouring gang when boarding an old hulk anchored near Camber. The wardens scoured Ireland Island and Boaz but Trowl concealed himself successfully in a cave near the water’s edge, and at nightfall crept along the shore to Boaz. Across Mangrove Bay lies that beautiful arm of beach-lined land called King’s Point, and Trowl swam the bay and found temporary refuge among the rocks on the west side of the Point. Perhaps he found shell-fish to satisfy his growing hunger, and the next night he worked his way shore wise as far south as Ely’s Harbour. Here he rested and proceeded with the darkness. He reached Tuckerstown by the South Shore shore, then cut overland to Paynter’s Vale, found a huge hole in the coral rock, known as Church’s Cave, where in the days of religious intolerance the Nonconformists held secret services, and lived there for several weeks. At night he would steal out and raid vegetable gardens. Later his daring increased and he broke into several homes and raided the larders. On one such nocturnal expedition he filched a suit of clothes and was able to discard his prison garb.

Late one night Trowl entered the home of a prosperous planter to search for food. The daughter of the house surprised him at the wine closet, and Trowl, losing his nerve, turned on her and struck her down. The convict bolted for shelter among the cedars, but the attack on the girl was to cost Trowl his life. The girl’s fiancée, was a clergyman at St. George’s and when he learned of the brutal assault on his sweetheart, he did not rest until he had roused the entire man power of the countryside in a man hunt for the escaped convict. Gangs of searchers combed the thick cedar woods that bordered Harrington Sound, every cave in the rocks was examined, and finally Trowl, realising discovery was inevitable as a party of searchers approached his refuge, broke away and made for Castle Harbour. The young parson, leading his batch of searchers, saw the fugitive make off into the woods and gave chase. Trowl reached the cliffs that drop to the sea on the south side of the Castle Harbour with the parson on his heels. Dropping over the cliff he crouched at bay on the ledge, but the parson, filled with indignant fury at the offense done to his fiancée, scrambled down after him. Lower and lower went Trowl until to evade his captor he leapt into the sea. The parson jumped too, landing almost in the convict’s arms, and a terrific battle ensued in about four feet of water with the combatants as often as not under water. The search party arrived at the cliff top but hesitated to descend. Trowl, hard as nails after years of prison life, soon began to overpower his assailant. The men above them waved muskets and shouted threats, but Trowl was killing his man. One of the watchers took aim with his gun, began to press the trigger and then to his horror saw the parson before his sights. He waited for a better chance, and when Trowl thrust the parson under the water, he fired. Trowl received a bullet through his head which killed him instantly. His body was recovered and was buried outside St. Peter’s Church at St. George’s.

Jail Break
On one occasion a general break of a large group of convicts seemed imminent. It appears that while the men were bathing in their enclosed pool a drunken sailor fell over from the bridge into the bay. The sentry on the donjon yelled an order to the convicts to save him. Immediately three hundred convicts dived into Mangrove Bay to help the drowning man and to taste the forbidden pleasure of a swim in the open sea. The guard was frantic but powerless for they were there by his official order. The sailor was saved easily enough, but it was several hours before the last convict had been brought ashore.

Accessory After the Fact
A pretty tale that resembles a novelist’s romance is told of a convict who escaped from the pool on Boaz Island. A party of thirty prisoners were conducted by the guard to their bath, but when they filed out of the enclosure only twenty-nine could be counted. Bells clanged and alarms were sounded and warders vainly searched the vicinity of the pool.

Several weeks later a party of young women were picnicking near Walsingham (Hamilton Parish). After lunching beneath the calabash tree celebrated by Moore’s poem they set out to explore the great caves nearby. The gloomy recesses of the subterranean caverns brought to mind the escaped convict. Two of the young ladies discussed the fugitive as they crept among the crystal stalactites which gave the larger caves the semblance of fairy palaces. One declared sententiously that, of course, the only thing to do should they see him was to report his whereabouts to the soldiers. The other had a gentler heart and expressed pity for the hunted man.

When they left the cave the latter lingered by the mouth to pick some ferns while the rest of the party went on. Suddenly a feeble voice spoke to her from the cave. It pleaded with her not to be frightened and not to betray him. He had heard her say she would feed him if she found him. A grey-haired man, tall, fine-featured beneath a ragged beard, and in piteous condition, crawled out into the sunshine. The girl controlled her fear as he came close to her. The supplication in his voice and in his eyes reassured her and she stood her ground. He told her his story, and swore to her that he was innocent of the crime for which he had been convicted. He pleaded with her to believe him, and promised that could he but reach England before it was too late he could secure proof of his innocence. With his cultured but desperate voice he won her sympathy and a promise to help him get away. She told him to find the calabash tree and take the remains of the luncheon away to his cave, and made a tryst with him for the following day.

The girl probably belonged to a very influential family in the Colony, for within a few days she had secured parole for the escaped convict, who sailed by the next packet for England. There he was as good as his word and successfully established his innocence.

The sequel to this occurred three years later at a ball given at Admiralty House on Clarence Hill. Naval and army officers and all the eligible feminine beauty of the Colony attended the function, and among the latter was the young Samaritan lady. She had heard nothing from the convict beyond the news of his final pardon. Quadrilles and cotillons were danced and she met a number of fresh young faces among the new garrison. Sometimes a couple would steal out under the moonlit cedars for a few minutes of amorous dalliance.

Late in the evening the convict’s benefactor encountered a young officer to whom she was instantly drawn, partly by his good looks and partly by something dimly familiar in his voice, eyes and general bearing. The waltz with him was quite the most pleasurable dance of the night, and when the music stopped she showed no reluctance when he suggested that they seek the privacy of the cedar grove. Answering her questions, he told her that he was not attached to the regiment here but had come to Bermuda for a private purpose. Then he confided the story of his father, which she knew better than he did. He said he had come to thank the young lady for her intercession, which had made his father a free and acquitted man. Not until he had finished her story and asked her if she could help him find the lady did she reveal herself as the girl he sought.

The coincidence brought a flavor of romance to their meeting to which the setting and circumstance liberally contributed. They danced no more that evening and when they parted it was with a mutual conviction that everything had been divinely arranged. Consequently, when the young officer departed for England some weeks later, the story has it that the young Bermudian lady sailed with him as his bride.