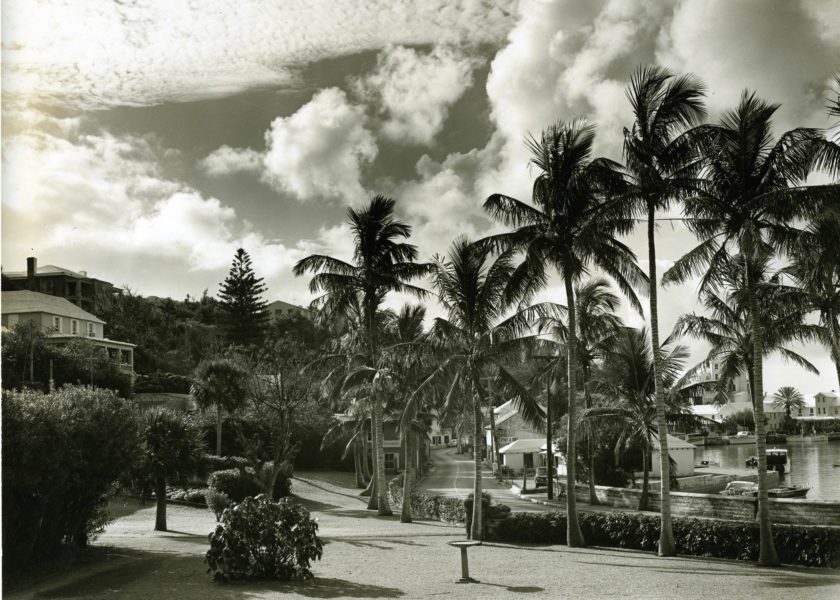 Flatts: A Port with a Past

This article was taken from our archives. It first appeared in the January 1973 issue of The Bermudian. It appears here exactly as it did originally.

Situated at the head of a small inlet midway along the rocky North Shore of the Bermuda mainland, the former port of Flatts is now the location of the famed Bermuda Aquarium and Museum, three major hotel complexes, a skindiving school, a helmet-diving tour boat, a handful of antique and souvenir shops, two cafes and two marinas. It also stands at the head of beautiful Harrington Sound, which disgorges its tidal waters through Flatts Inlet and then sucks them back twice a day with often spectacular results.

But Flatts village, named after the shoals at the mouth of the inlet, manages to retain its atmosphere of calm serenity in the face of the streams of water under and the streams of traffic over its bridge. Its main street is, in fact, little changed from that which existed when the port was in its prime in the 1700s, except that the rows of warehouses that lined the bustling thoroughfare now house antiques and bric-a-brac, codfish cakes and auxiliary cycles instead of liquor and provisions. Also still intact is the traveller’s inn which succoured Bermudians on their 12 mile journey from the then-capital town of St. George’s to its fast-growing commercial rival, Hamilton. The inn, now a private home called Wistowe and situated on the eastern bank of the inlet just before the village, was the scene in 1742 of Bermuda’s most famous duel. Newly-wed Peter Nice, angered by the attention being paid his young wife by bachelor Robert Hill, brought the duel upon himself by striking his tormentor across the face with his glove. What had started pleasantly as a society ball turned into a tragedy as the two angry men fought with swords in the moonlight at the very water’s edge until Nice was run through and killed. Hill was acquitted both at the subsequent trial and at a second protracted hearing brought by the victim’s relatives on the grounds that the first jury had been bribed.

Flatts became known for its commercial significance, as the owners of the surrounding properties exchanged the boredom of agriculture for the exciting life at sea, first building and then sailing their own beautiful vessels to the West Indies and North America. Naturally, any declaration of war increased the scope of their ventures to include the profitable enterprise of plundering the King’s enemies, and as a result the Bermudians prospered mightily and Flatts along with them. It also became a notorious rendezvous for smugglers. Customs officers, or searchers as they were called, were stationed seven miles away in St. George’s, and it was an easy matter for a shallow-draught vessel to stand in through the familiar channel during the dark of the moon and unload rum and other contraband at the wharf-side in Flatts. Fortunes in cargoes were landed in this way, especially towards the end of the 18th century and during the American Revolution when the colony came close to starving and food prices rocketed overnight. Having paid the exorbitant famine prices for his good, no importer at Flatts was keen on paying the Government’s revenue taxes as well.

One of the smugglers’ storerooms was discovered recently in the cellar of Fairview, the imposing house situated on the hill above the Lazy Corner Antique shop on the village main street. Ironically enough, it was this very house that was used as an emergency meeting place for Bermuda’s House of Assembly in 1761, when the Governor prudently withdrew from St. George’s on the appearance of French privateers off the east end of the island chain. It is not unlikely that the house that served as a law-making parliament by day welcomed law-breaking smugglers by night.

The duelling, smuggling, privateering days of the 18th century were the golden days of the Flatts. But even before they were over, the powdery white sand at the harbour mouth had begun its slow work of strangling the port. By the time the Flatts was recognized as an official port of entry in 1848 there was scarcely six feet of water left over the sandbar at the harbour mouth, and the once busy port entered its declining years.

The advent of the tourist industry to Bermuda after the First World War brought the Flatts a new lease on life. The warehouses were converted into shops, the Frascati Hotel (now the Coral Island Hotel) rose on the west bank, and in 1926 the Aquarium was opened by the Government directly opposite.

The development has been gradual, and even the railway which once ran along the North Shore crossed the mouth of the inlet and left the village in peace. It is the fervent wish of residents that Government make use of the railway bridge pilings that remain to reroute the North Shore highway away from the village.

“What a blessing that would be,” comments bearded antique-shop owner Colin Cooke, the “squire” of Flatts. “With the traffic removed we could get down to restoring the village to something of its former glory.”

The thought of turning the main street into a pedestrian mall has long excited Cooke and his neighbours and they waste few opportunities to press this scheme with their parliamentary representatives. The prohibitive cost of a road bridge has always defeated their efforts to date, but the fight goes on.

Meanwhile the ancient motor-boat Carioca continues to take tourists out each summer day from Flatts to nearby sea-gardens for a helmet-diving trip under the experienced eye of Bermudian diver Bronson Hartley, and the $250,000 Tucker Treasure in the museum section of the Aquarium complex continues to attract its share of spectators. The treasure, found in 1955 by the renowned treasure seeker Teddy Tucker, and purchased by the Bermuda Government, provides a fitting climax to a visit to the Aquarium — regarded as one of the most comprehensive of its kind in the world.

If anything Flatts is now more wide awake by night than it is by day, as guests at the Coral Island Hotel and Palmetto Bay Cottage Colony meet friendly locals in their dining rooms and bars and finish the evening singing along with “Ernie” in the little “pub” in the main house of Palmetto Bay.

The third hotel is Deepdene Manor, once a magnificent private home situated a stone’s throw from Flatts and now being developed into Bermuda’s first tourist establishment with the emphasis on health and recreation. Add the marina that has recently opened on Harrington Sound and the large condominium on the outskirts of the tiny village and one can readily understand why Flatts residents are looking forward to a busy season.

But the locals are equally interested in maintaining the character of the area. In a recent clash with authority they complained so effectively about the unBermudian design of the new Flatts post office that work was halted and, at an extra cost of $12,000, a Bermudian-style roof was added.

Whatever the rest of Bermuda may think about Flatts, to the residents themselves the ancient port is part history and part scenic beauty and well worth preserving and Flatts handles the devotion of its residents and the admiration of its visitors with unmistakable and delightful poise.