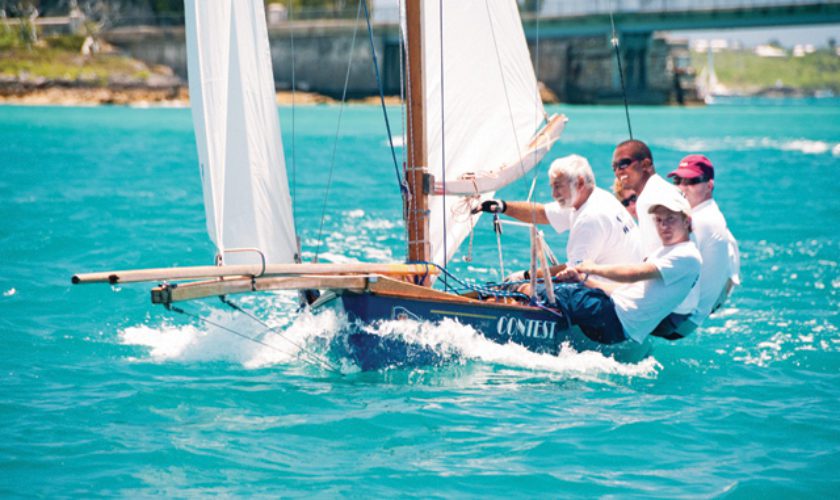 It now seems odd to many that there was a time when the Royal Bermuda Yacht Club did not take part in the most Bermudian sport of all.  But it wasn’t until 1975 when the idea came to fruition that Contest II should come to the RBYC that an RBYC crew started to sail her.

Contest II had sailed out of the Royal Hamilton Amateur Dinghy Club for some years—since the Bermuda Sailboat Club based on White’s Island had suspended operations—but she always was, and naturally was always going to be, the poor stepsister to Elizabeth the RHADC’s own dinghy.

The trustees of the Sailboat Club, among them Than Butterfield and Sidney Greet, decided to ask the RBYC to consider being the host for Contest II and, in 1975, before the deal was quite done, an RBYC team led by skipper Harry Powell took on the season’s campaign.

In 1976, the paperwork was signed and for a payment of $2,500 to cover the RHADC’s investment in rigging and sails, plus a charge of $510 due for towing charges for the transitional 1975 season, the newly formed Contest Syndicate moved their boat to the basement of the RBYC to sail under the club flag.

In the ensuing years, Contest was delivered to the races by the RBYC’s own Cleopatra and many people who sailed her in those early years have fond memories of sleeping on sail bags on the tow down to St. George’s, delicious brownies prepared by Pat Butterfield or Sidney Greet and the difficulties in refloating a dinghy without a crane.  For those of you wondering, the trick is to get it as close to the surface as possible and then bailing faster than the harbour can rush back in.  This required a relay of people who dive out of the boat after about two minutes of furious baling so the next guy could jump in from Cleo.

The enthusiastic crew of Contest II fitted her with a new keel, which was shaped more hydro-dynamically like the keel of a Soling or Etchells.  This keel, which unbolted a few inches below the hull to allow the boat to be stored in the basement at the RBYC (otherwise she’d be too high to fit through the door), was very fast and salt would be crusted on parts of it after a day’s sail as a result of turbulence generated by the slipstream around the keel.

Of course the new keel had to be outlawed—the boat was too fast and on at least one occasion in Granaway Deep she seemed to exceed her displacement hull speed and drive herself underwater on a downwind leg. The new keel was replaced with a more basic traditional dinghy keel.

The stresses put on a fourteen-foot long wooden boat by a thousand or more square feet of sail and a beefy crew of seven hiking out are immense, and the boat was rebuilt by shipwright Ray DeShields and a thick layer of mahogany or teak was run down each gunwale.  Unfortunately, under the measurement system then used this increased her volume and meant she had to start dead last every time.  It was some years before the modern reverse finishing-order system was used to determine starting order.

Eventually Contest II was too worn out and a replacement was built in the US.  RHADC had taken delivery of the Britten Chance-designed Elizabeth shortly before and she was a radical departure from the traditional Bermuda fitted dinghy, so it seemed to me that the official measurers breathed a sigh of relief when they arrived on the dock at the RBYC and saw the very traditional looking blue dinghy designed by Patrick Dill, with some tweaks by Bruce Lines and the US builder.  The race results the new boat achieved spoke well for tradition and although, at her christening, Commodore B.W. “Jordy” Walker called her the most expensive boat per square foot he’d ever seen, even comparing her to super-yachts with helicopters and trucks, in hindsight it was money well spent.