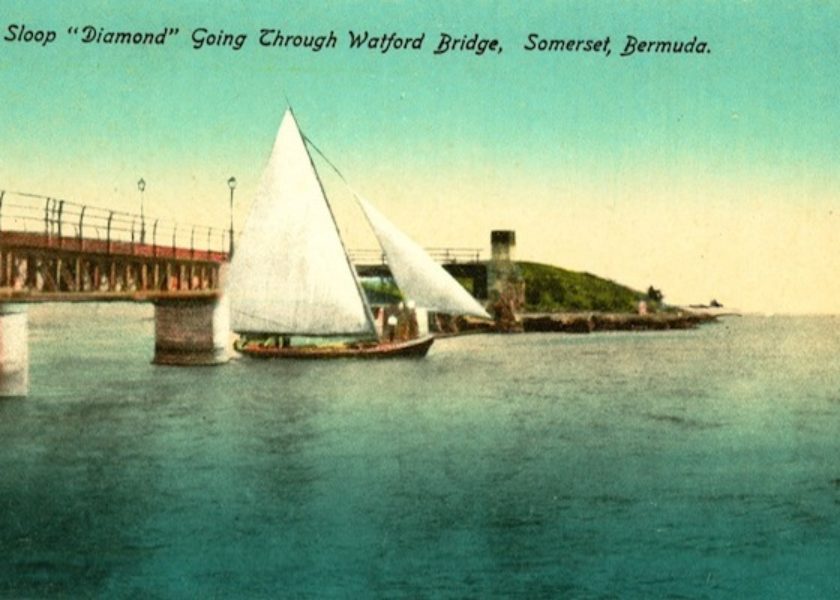 From Yacht to Freighter

The article is from our archives. It originally appeared in the January 1948 issue of The Bermudian

The afternoon we chose to go to Somerset by the Diamond rather than by rail, ferry, bicycle or the Somerset Express, Ingham’s bus, which usually takes four hours for the twelve-mile journey, augured well for a warm, smooth and speedy trip.

It’s a safe bet that nowhere in the world but Bermuda can you take a seven-mile voyage on a teak-decked freighter – not for the price, but for a bottle of rum! A quart of “Nelson’s Blood” (Gosling’s Black Seal) was the fare two of us paid for a trip from Hamilton to Mangrove Bay, Somerset on the old sloop Diamond. You’ve seen her, no doubt, on her weekday roundtrips between these ports, tacking up the channel at a snail’s pace or boiling along with the wind, gun whales awash and her dusky crew squatting in the half decked-over cockpit dodging the spay. And like myself you have heard hoary tales of the old ship – how she was once an admiral’s barge, which is true, an dhow she’s been on the Somerset run for night unto a hundred years, which ain’t so, to quote her owner and skipper, sixty-eight-year-old Clinton Andrew Symons . . .

A hot sun beat down on No. 6 Shed where Symons and his crew of two were loading, which they had been at since their noon arrival from the West End. The wind, light but steady, would be on our quarter.

The skipper reckoned we would set sail at three, but long after that hour we were still watching bags of coal, apples, cow feed, cement an potatoes, tins of kerosene, crates of dry goods, bricks and tubs of butter go sliding down a gangway or be hoisted aboard by a makeshift single block and tackle. Symons, who was not driving his lads to a speedy loading but working along with them, kept an eagle eye on their every move. Once Aldon, the huskiest and laziest helper, carelessly dropped a 100 lb bag of oats into the forward hatch and a yellow grain gushed from the resulting hole. Symons, down in the hold, stopped stowing cargo: “Awright, Aldon, come do your work.” That was all.

Aldon came and did, salvaging as best he could the scattered oats. His other helper was a harder worker and talked less. Later I found out why. Symons was his father.

After the oat episode Aldon become more and more glib, forever chaffing the old man. “You is had your day.” Was his pet theme. “We young fellows can’t larn nothing from you . . . We don’t has to work hard . . . we likes to play ‘round . . ..” However, his gibes were lightly given and if they were noticed at all they just rolled off the skipper’s bent back which, after thirty minutes of strenuous work with the potato bags, disappeared into the deep and dark cabin astern. There, crouched by the ship’s latest acquisition, a third or fourth-hand Palmer engine, and surrounded by gas cans and gear, ate his “lunch” of boiled fish, prepared early that morning at home and warmed up by his galley stove, a small oil burner.

It was striking four from the tower clock when we finally cast off. Aldon first ran up the jib, then the mailsail, which looks for all the world like a crazy quilt with its patches, and variety of rents and holes. Son Willie (Clinton Wilberforce Symons) had the ancient Palmer chugging in a minute and we were heading down the harbour at four knots, Somerset and the lowering sun dead ahead. Front Street, Albuoy’s Point, the Yacht Club and the Princess Hotel in all her pristine pinkness slipped by to starboard. On the other side of the harbour we had a more distant view of the hundreds of white and pink and yellow and green houses that cluster along the Paget shore.

My companion was hopping from feed bag to bowsprit taking pictures. The crew had gathered aft, Willie at the rustic tiller, Aldon enjoying the passing scenery and a fewshly lighted threepenny stogie, and Andrew Clinton Symons, with half an eye to the set of the sails and our course, politely answering my questions and throwing in an anecdote or two on the hook. It was more than just pleasant sailing and chugging along down the blue harbour. It was a step back into the past when humans as well as oats were transported in sail.

By the time we had reached Two Rock Passage, Symons had sketched the highlights of his ship’s life. Built at Bailey’s Bay in 1857 of native cedar, with teakwood deck and brass fittings, she was put into commission as the Admiral’s barge. Up until 1922 she was comfortably fitted out as a pleasure ccraft with canopied cockpit and “nice sof cusions in de cabin.” While he had never taken part, her present skipper well remembers the Diamond racing against such grand oldtimers as Undine, Sylvia and Nautilus, but without much success, for the 14-ton Diamond was never able to make up the time allowance she had to grant her smaller competitiors. When Vice Admiral Watson raced her in the Royal Bermuda Yacht Club regatta, April 12th, 1889, he finished up in the customary last position, having allowed the winning boat, Sylvia, 17 minutes and 40 seconds.

It was in 1922 that Symons scraped together niney-five pounds and bought the Diamond, sailing cargoes between Somerset, Hamilton and St. George’s. With the coming of the railway in 1931 Symons stopped making runs to the East End and for seven years now has been carrying his polyglot loads only between Hamilton and western ports. I say ports because, though very few are aware of it, about twice a month the Diamond makes calls at Southampton and Somerset Bridge. For twelve years the Diamondhad a valiant competitor in the freight trade in the Teazer, a sloop of similar build, whose mast was even more rakish and whose timbers were more than a hundred years old. Teazer had a long life – she moored alongside at the Public Wharf in Mangrove Bay one evening in 1934 and the next day was found settled on the bottom – but she never knew the tread of admirals’ feet. For a time she was elevated to pilot boat at the West End but then there was that shady time in 1845 when her owner, one John A. M. Gilbert, was solicited to “Raffle that Boat.”

A lull in the skipper’s narration afforded me the chance to remark on a rudely make 15-foot spar which was lashed to a forward stay and the bow-sprit. It was her spinnaker boom which had not been used since her big jib rotted away four years ago. It had been a racing sail but under the right conditions Symons had used it too. Once it helped him sail from Somerset to Hamilton in 35 minutes. True, on that record-breaking day there was “a bit of a gale” blowing abaft the beam. More frequent though have been days with a five-hour stretch at the sweeps. Even since the installation of the engine about a year ago the men have had to heave on the long oars.

We were halfway across the Great Sound. A high-powered cruiser roared by all white and shining in the late afternoon sun. Its uniformed captain waved and three hands waved back. Aldon, who had been content to smoke in silence, was feeling the coolness of the sea voyage. He had seen us give his skipper the bottle of rum when we left Hamilton. “How ‘bout jest a small one, boss?” he pleaded. “No,” said Symons, “and don’t you try to beat me down. Trim your jib sheet.” It was one of his cardinal rules that drinks came only after the last piece of freight had been uploaded. This rule, of course, applied only to the crew.

Having sailed a straight course it was only a few minutes past five when we glided through the swing bridge that connects Sandys with Watford Island. Labourers homeward-bound from the Naval Dockyard lined the railings to watch us slip through the narrow channel. This part of the trip can be quite tricky without mechanical power, and with wind and tide against you it is sometimes almost impossible to get through the narrow gap between the bastions. “Oh, yes,” said Symons, “we has gone ‘round de end ob de Dockyard sometimes, and we has not gone at all sometimes, and once, one Sunday, when I had my wife and four or five grandchillum out for pleasure, we went through in de mornin’ but not dat night. We was becalmed and we all slept aboard in de middle of Great Sound.”

As we entered lovely, peaceful Mangrove Bay Symons went below and came on deck with a conch shell upon which he blew three times.

“Dat’s for Patterson. Lets him know I has a package for his store.”

A minute later he gave four blasts on the shell horn.

Such is his method of telling his regular customers to come down to the Public Wharf and pick up their consignments. Numbered among these regulars are such names as Patterson, Foley, Roberts, Marshall, Fisher, Mackay and “Mista Huge Gray who runs de Cambridge guess house.” These steady Diamond patrons get preferred rates. Although you may not be inquisitive about the rates themselves you might be as surprised as I to learn that skipper Symons’s receipts average better than four pounds on each Hamilton to Somerset trip. Very seldom does he do any business on the eastbound morning passage.

We were coming up to the Public Wharf now. Aldon was lowering away on the sails. Willie was down below and the skipper was making the landing. The trip was over. It had been disappointing only because it had been too swift. As we started out for the nearby railway halt Andrew Clinton already had his boys busy with the unloading. It was then five-twenty. With the help of a dockside crane and possibly an extra stevedore they would have the job done by eight-thirty. Then Aldon would get his nip of rum and so would Willie, and, according to Aldon, his boss would take care of the rest . . . and be rarin’ to go the next morning at nine.

Someday we are going to make the morning run. It must be just as interesting and peaceful as the afternoon sail. Maybe it will be next year or the year after. There is plenty of time for Symons assured us that his ship is in first rate condition and like himself is good for many years to come. Let’s hope so and let’s hope that that old rusty horseshoe nailed to the combing will continue to bring her luck and daily cargoes worth four pounds freightage.