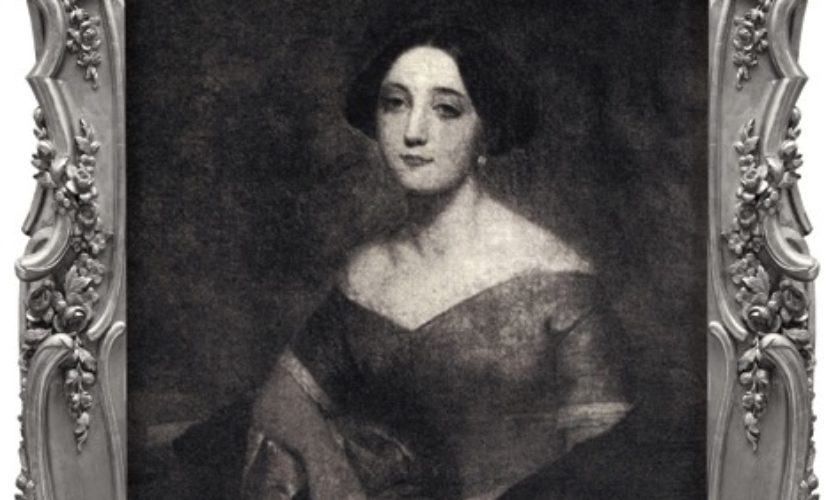 A peek under the petticoat of a confederate southern belle’s life in Bermuda.

It is most likely that historians specialising in Bermudian history would never have heard of Georgiana Gholson Walker or seen her as a significant figure had it not been for the outbreak of the American Civil War in 1861 when she began keeping a diary. She would probably have continued her privileged life in Petersburg, Virginia, as a well-connected, happily married Southern hostess. But the war did break out, irrevocably changing her circumstances. Her husband, Norman Walker, and his brother, John, joined the Confederate Army, and the grim reality of the war came home to her when John was killed at the Battle of Malvern Hill in July 1862.

Norman resigned from the army and in November was sent to Bermuda as a Confederate agent. He then sailed on a blockade runner to Nassau and from there went on to England to deliver $2,000,000 in bonds to a Confederate purchasing agent. It was at this point that Georgiana, perhaps to alleviate her anxiety about her husband’s safety at sea by recording her feelings, started her journal, which she continued intermittently until 1876. In it she recounted that when her husband returned to Bermuda to “take charge of all the affairs of the Confederate States, representing the various Depts.,” she decided to join him, arriving in March 1863.  The couple stayed in Bermuda until June 1864 when they left for Europe, returning to the island in January 1865. Published under the title The Private Journal of Georgiana Gholson Walker by the Confederate Publishing Company in 1963, her diary provides invaluable insights into Bermuda’s part in the war as a centre for Confederate blockade runners. As Rosemary Jones says in her article “A Belle in Bermuda,” published in rg magazine, May 2008, “…personal, political and powerful, her witty commentaries on Bermuda life—at once far removed from the bloody tumult splitting America’s North and South, yet ironically, an integral part of the conflict—paint a vivid historical snapshot. Excerpts reveal her views on one of the most significant periods in American history—as well as Bermuda’s—a time when the British colony, an officially ‘neutral territory’, nonetheless played a cat-and-mouse game of politics that reaped an economic boom for the Island.”

One such commentary wryly described the effect of the new economy on the retail trade in Bermuda: “All who have anything to sell, seem to feel called upon to try and sell it to a ‘Southerner’ for the largest possible price. We are fleeced first and worst, then the Military and lastly the ‘Mudians.’”

But the journal is also fascinating in that it reveals Georgiana’s multifaceted character—a Southern belle with social confidence and a strong sense of style, who was both dependent yet independent, flirtatious yet faithful, charming yet catty, albeit often in an amusing way. She was also a Southern patriot and as such, in her views on race, utterly chilling.

From the beginning of her diary we see her as a loving wife and the mother of three small children, with another child on the way. After she sold her furniture and gave up her rented house to stay with a friend before leaving for Bermuda, she wrote, “Whether or not the time will come when I will regret my own house I cannot say—I think not until I can enjoy it with my Husband for these things which are delights to me when he is by my side become sorrows and troubles in his absence.”

Against the passionate advice of her friend, Mrs. Jefferson Davis, wife of the president of the Confederate States, she persuaded the captain of the blockade runner Cornubia to take her and the children to Bermuda, undaunted by the knowledge that the last ship to run the Yankee blockade encircling Southern ports had been captured and that she was the first woman to take the risk. Once she reached land, she was able to greet her husband and experience “that blessed feeling that now I had one on whom I could lean, and be supported, protected and comforted!”

While her husband was busy supplying the Confederacy with steamers, munitions, food and clothing, she set up house, first in the Globe Hotel (now a National Trust museum in St. George’s) and then in a cottage. She maintained contact with her family and friends by sending them letters via the blockade steamers, as well as essential luxuries, such as gloves, veils and bottles of brandy, that thanks to the war were impossibly expensive in the Confederate States. Before leaving for Bermuda she had written, “Kid gloves, which had ceased to be a luxury, are now the greatest among luxuries & command $6 a pr.… If a lady orders a bonnet, her Milliner sends with it a bill of $60 or $75! & mere trimming of an old one will not be undertaken for less than $20 or $30! So against all this a Southern rebel has to contend…”

She also resumed the role of social hostess she had carried out so successfully at home, according to one admirer, Dr. John H. Claiborne. In charge of all the hospitals in Petersburg, Virginia, he described her as “a charming young lady, a beauty and a belle, who made her home not only happy to her parents but to her many young friends; and at her entertainments, refined and recherche, you might be confident of meeting the grace and the chivalry of Virginia on her palmiest days.”

In Bermuda she was determined “to make our little Island Home, attractive to our Southern Friends, and all of them feel sure of a hearty welcome.” As a result she and her husband gave lavish dinner parties. On December 13, 1863, she amusingly recorded, “I gave today my first dinner party which included ladies, having heretobefore confined myself to gentlemen only.” Her friends included  Mrs. Rose Greenhow, a Confederate spy who spread word of her cause in Europe, Mrs. Julia Tyler, widow of  U.S. President Tyler and Albert T. Bledsoe, colonel in the Confederate service and assistant secretary of war. But she and her husband also mingled with the higher echelons of British society. “I find Governor and Mrs. Ord among the most intelligent & refined persons whom I have met,” she gushed. “They called on me after they came to St. George’s, paid a social and most agreeable visit.” Governor Ord seemed “greatly interested in the affairs of the Confederacy and I found him remarkably well informed in regard to the politics & geography of our country.”

The Walkers also mixed with the military, the British soldiers appealing to her fondness for romance. “I love to see their scarlet coats,” she wrote without a trace of irony, “& to hear the clanking of their swords as they come up the church aisle & I think it must have been a glorious sight in times of old, when every warrior raised his sword as he ‘confessed his faith.’” She is not so wholly fulsome about a “musicale” she attended at Mrs. Colonel Graydon’s. “There was a great deal of music, some very good, some very bad. I think the last predominated.” However, she conceded, “A Mrs Thomas also sang well provided you did not look her in the face.”

Many of her entries point to her acute awareness of fashion. At a party she attended on New Year’s Day she noted that “old Lady Pickthorne was resplendent in black velvet, which was certainly brought out on the cruise in which old Somers discovered the island…” and that “these English women all seem to hesitate whether it is most graceful to have a dress longest in front or behind and generally split the difference by getting it as near one length as possible.”

Even the clergy did not escape her critical eye. “He is a fine looking prelate,” she wrote of Bishop Field of Newfoundland. “But I cannot become accustomed to the wearing of lavender coloured kid gloves, a cu
stom universal with English Bishops.”

Of her own style she had no doubt. For a dinner party at Government House, she made “an elaborate (& although I say it) a very beautiful toilette (the whole credit of which  is due Mrs Weston who ordered and Madam Elise who made it)….My dress swept quarter of a mile (more or less) behind me and the company had the good taste not to step on it….”

But throughout her stay in Bermuda, she did not forget her commitment to the Confederate side. What’s telling is that though she was understandably distressed by news of lost lives, battles and ships, she never once in her journal directly explained the key issue of the war—that the South wanted to continue the practice of slavery while the North did not. Instead, she expressed Southern patriotism in high-flown rhetoric. “But I fear there is ‘No Peace’. Our savage foe have not tasted blood enough yet! I am sure the cry of every wife and mother’s heart must be for peace, from any cause, so it is one of honour and good for the Confederacy.”

And sometimes she was nauseatingly sanctimonious: “Oh that the God of Battles, would grant us one glorious and complete victory over our foes—that we could at some point, drive them back, & scatter & annihilate them! But could we bear it? Could we have it and be humble, thankful?”

Nevertheless, two chapters into the journal, her view on slavery is shockingly clear after a comment she was told about Governor Ord. “I have heard that he was not as popular as he might be among these Islanders, because he told them once that he had ‘come here to govern them, & not be governed by them.’” Whether Governor Ord was referring solely to black Bermudians is uncertain, but Georgiana had no such uncertainty. At this point she took off the kid gloves she loved so much. “I would pity the man who was governed by this African aristocracy!” she wrote. “Cursed with freedom! What is more pitiable than to see a people incapable of self government, born to be slaves and yet forced to be free.  …Generally the negroes here, are polite and inoffensive, but lazy beyond all description. They feel themselves to be, in all respects the equals of whites, and emancipation is sufficiently new to cause them to make constant this fact before the people.”

(Her view, by the way did not prevent her from buying her dress with the train of fame from “Madam Elise,” the pseudonym for the wife of Joseph Rainey, a former slave who had escaped to Bermuda in 1862 after being drafted by  the Confederate government and who was to become the first African-American in the U.S. House of Representatives.)

After recording the North’s victory and thus the end of slavery, she revealed the resulting economic realities that would impact her family, imbuing them with a twisted logic. She referred to Brook Hill, a slave plantation near Richmond, Virginia, where Norman grew up and also by implication to a plantation Norman also owned in Jackson, Mississippi. “If we are not impoverished by confiscation, we are likely to be by the poor creatures of whose responsibility, we have so suddenly been relieved,” she wrote. “None of ours have left us, poor souls! I am more than ever convinced that God intended this race to be slaves, for I can hardly believe that he created them for destruction….”

And so by the end of the journal we are left with a disturbing portrait of a Southern woman of her time. Underneath her elegant petticoats, beneath her social charm, lay unctuous condescension and obdurate racism in all its ugliness.