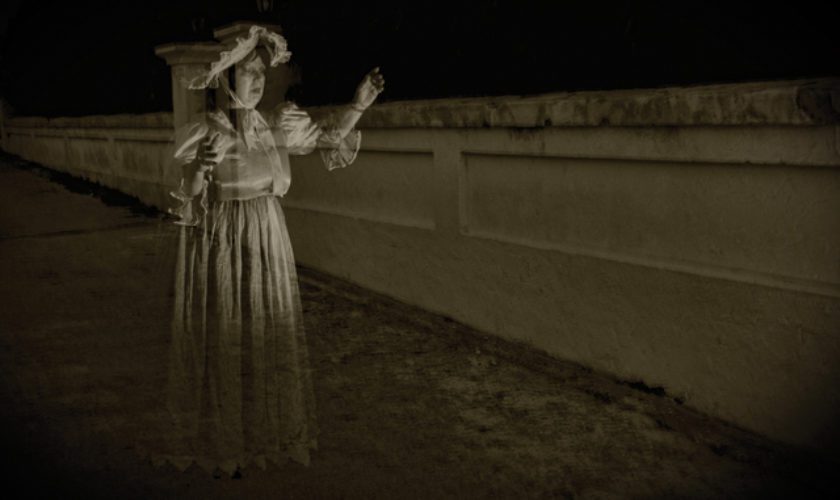 The white-roofed houses and quaint walled alleyways of St. George’s take on a ghostly ambience in the yellow light of street lamps after dark. Such is the old town’s silence you can easily hear the tread of feet, the creaking of bamboo and the rustle of cedar, making it easy to believe the ghosts of the past are still lurking in the town square, gardens, lanes and cemeteries.

Thanks to owner of Long Story Short bookstore on Water Street,  Kristin White, participants in her Haunted History tour of Ye Old Ghost Towne don’t have to believe; they can see for themselves. The dead come to life every Thursday drawing visitors back into the many stories, normally hidden away in history books and archives, of Bermuda’s past.  Dressed in Victorian black cloak and top hat, lantern in hand, Kristin lures followers from King’s Square into the streets, all the time narrating his stories and interspersing them with louche, slightly sinister laughter and summoning forth her troupe of characters, also in costume, who emerge from the shadows.  We do not want spoiler alerts. Suffice it to say, partakers, or should we say undertakers, of this tour will hear about, and in many cases meet, governors and slaves, mariners, redcoats and murderers, lunatics, lovers and perhaps at least one poet. By the end of the evening they will know more about Bermuda than they might have thought possible.

White moved to St. George’s 15 years ago and fell in love with the old town and its history. Formerly executive director of Raleigh Bermuda, a philanthropic organisation dedicated to offering the island’s youth opportunities to volunteer abroad, she stepped down in 2013 because she wanted to concentrate on her work for St. George’s—she wanted to promote the town while at the same time creating employment opportunities for its residents. Her Long Story Short shop is one such enterprise. Another aim is to promote St. George’s as a venue for wedding ceremonies and receptions.

White came up with the Haunted History idea as a fund-raiser for the St. George’s Foundation. After conducting considerable research, she wrote the script herself, hired and directed actors as they were needed. Then she realised the show could work as a tour with the addition of other actors taking on the different spirit roles.  And work it most certainly did during the summer season of 2015 when scores of visitors would take the tour every Wednesday and Thursday.

Haunted History tours will run on Thursday nights at 8:30pm until mid-October. There will be special tours for Halloween before 7:00pm tours starting in November.

Click HERE for information about regular and private tour bookings.