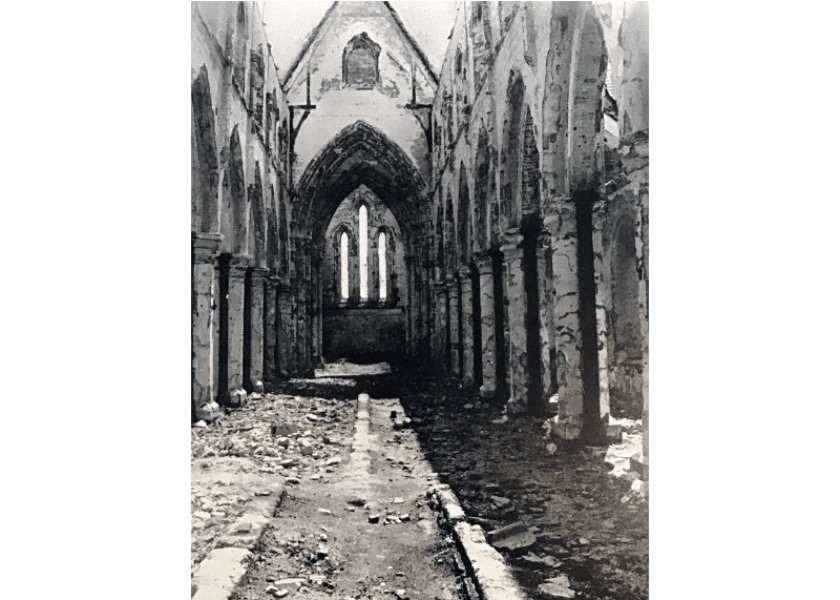 1. Perot’s Post Office
William Perot became Bermuda’s first postmaster general in 1821, after several years of acting as an unofficial postman. In 1848 he produced his own postage stamps, one of which sold at auction in 1985 for $92,000. Perot used to stamp all outgoing mail himself but grew tiresome of the monotonous task. His friend and famed photographer, James B. Heyl suggested he create a whole sheet of stamps and sell the sheet for a shilling so that people could stamp their own outgoing mail – a genius idea! Perot’s Post Office is still in operation and is located where Queen and Reid streets meet. You can visit Perot’s Post Office between 9:00 a.m. and 5:00 p.m. Monday through Friday.

2. Perot’s Rubber Tree
William Perot wasn’t just Bermuda’s postmaster general, he was also a keen horticulturalist who supported bringing new species to Bermuda. In 1847, he plated a rubber tree on what is Queen Street. Purchased for Essequibo, Guyana, the tree continues to provide shade to Bermudians and visitors alike some 160 years later. You can visit Perot’s rubber tree on Queen Street, it is at the entrance to the Bermuda National Library.

3. The Cathedral of the Most Holy Trinity
Construction began on the forerunner of what is today’s Anglican Cathedral on July 1, 1844, following a ceremony at St. John’s Church, which attracted a great crowd. After the service, a band accompanied the congregants to the site. On arrival, the Rev. J. F. Lightbourn, the rector of Pembroke and Devonshire, gave an address and offered up a prayer. The church was consecrated as the Church of the Most Holy Trinity and was completed some 28 years later, only to be eventually destroyed by a fire of suspicious origin. The rebuilding of the Cathedral began in 1885. James Perot offered his quarry at Par-la-Ville for the main stonework. Arriving on board the Sir George Seymour were granite columns from England. Three hard-stone masons came from Edinburgh in June. You can visit the Cathedral of the Most Holy Trinity each week day. Visit https://www.anglican.bm for more information.

4. Royal Bermuda Yacht Club
Lord Mark Kerr was the first elected commodore of the yacht club. The club had been formed in 1844 at a meeting held at the calabash tree at Walsingham. Through Kerr’s influence, the patronage of Queen Victoria’s Consort Prince Albert was secured, and Queen Victoria gave her sanction for the word Royal to be used in the name of the club. The first regatta was held in 1845. In 1884, the Lords of the Admiralty authorized the club to fly the blue ensign of the British fleet – a distinguished honor for a club of any colony.

5. Princess Hotel
Local architect Edward Peniston designed the Princess Hotel, named in honor of Princess Louise and now called the Hamilton Princess & Beach Club. In an attempt to overcome the dampness of Bermuda, the hotel was built of wood. Although local businessman Harley Trott pioneered the project, a prospectus (The Bermuda Hotel Company) was launched to raise the projected 15,000 GBP building cost. Financing proved difficult, the entity was put up for sale after a poor first year of trading. In the end, control passed to Harley Trott. The hotel, which opened January 1, 1885, under the management of Nathan S. Howe, featured 100 rooms. Visit the Hamilton Princess & Beach Club and dine at one of their three award-winning restaurants: Marcus’, Crown & Anchor Bar, Restaurant & Terrace and 1609 Bar & Restaurant.

6. Hamilton Dinghy Club
Following the establishment in 1882, the club was granted its Royal Charter by H.R.H. Princess Louise, who visited Bermuda the next year.

7. City Hall
After 25 years of discussion, delays and construction, City Hall was officially opened on the site of the former Hamilton Hotel on February 11, 1960. Visit City Hall between 9:00 a.m. and 5:00 p.m. on weekdays. There are two art galleries located at City Hall: The Bermuda National Gallery and the Bermuda Society of Arts.

8. Bermuda National Gallery
The Bermuda National Gallery opened its doors in March 1992, but it might never have existed but for the single-minded efforts of sculptor Desmond Fountain, who had founded the Bermuda Fine Art Trust in 1980 with the aim of establishing a national gallery. With the support of trustees Hereward Watlington – whose bequest of his extensive collection of English and European Renaissance paintings would form the basis of the gallery’s collection – Lt. Col. Michael Darling and Jay Bluck, the trust was incorporated by act of Parliament in 1982. When the Corporation of Hamilton offered space in City Hall in 1989, Fountain’s dream became a reality. Visit the Bermuda National Gallery located at City Hall between 10:00 a.m. and 4:00 p.m. Monday through Friday or between 10:00 a.m. and 2:00 p.m. on Saturdays. Admission is $5 for adults.