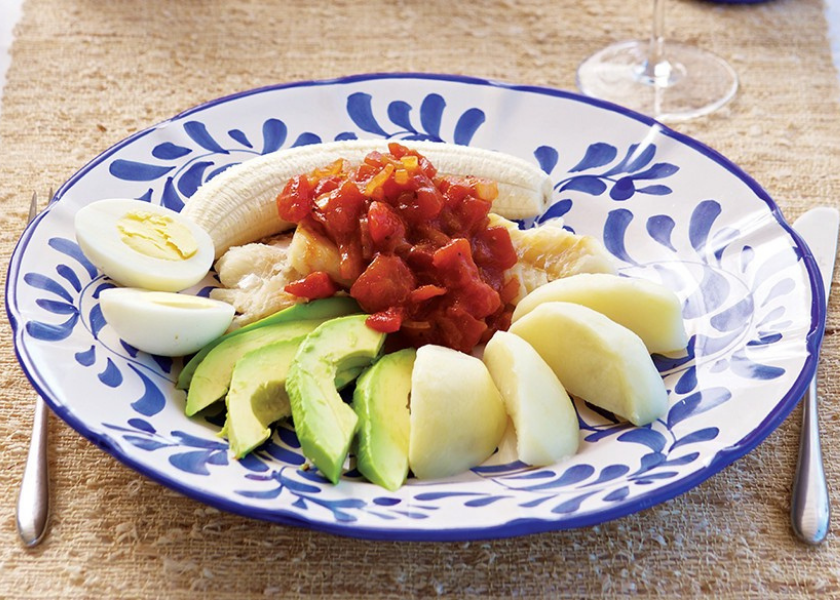 In Cod We Trust

Making a satisfying meal with dried, salted cod at the centrepiece had to have been a close to insurmountable challenge for Bermuda’s early settlers. But necessity is the mother of invention, the making of a meal worth eating with precious few available ingredients resulted in what Bermudians today proudly call their national dish.

Codfish breakfast – dinner because it has morphed into an evening meal in many households across the island – is simple fare. At the meal’s core is just a few ingredients: salt cod that has been soaked free of much of its saline preservative, potatoes, ripe bananas and a sauce. The sauces served atop or alongside this much-beloved island dish vary by household, and opinions range as to which is the most traditional or correct. Recipes for this codfish feast have been passed down through families for generations. Variations of it are as diverse as the cooks who first encountered those salt-preserved sides of split whole cod.

Originally, salted cod was a staple protein that was probably served more frequently than most people would have liked. But it was inexpensive and economical, and therefore was regularly featured in the diet of yesteryear.

Salt cod came to Bermuda as part of the great trading route that stretched from the Turks Islands in the Caribbean – once a Bermuda possession – up to the Canadian Maritime provinces, beginning in the seventeenth century. Grand Turk Island and Salt Cay produced much high-quality salt. This prized cargo was transported by boat and sold to purveyors in towns and cities along the east coast of North America up to Newfoundland, where the bulk of cod was caught and dried. It was also traded for a range of staples.

Knowing that American colonists depended on salt at harvest time, Bermuda’s salt merchants worked the market to their advantage. In fact, when harvest time came they often increased their prices by lessening the supply of salt to drive up the price. Bermudians reaped the benefits. Timing was everything.

According to Michael J. Jarvis, author of In the Eye of All Trade: Bermuda, Bermudians, and the Maritime Atlantic World, 1680-1783, salt was a huge component of the island‚Äôs economy in the 100 years preceding the American Revolution. Further, he writes that Bermuda’s Turks Islands salt comprised around a fifth of North American supply in the early 1770s.

Bermudians even tried to move in on the cod business in Newfoundland in the late 1780s, but were sent packing after they posed a threat to the locals because they were such quick studies on fishing for it successfully – and then processing their catches with their own salt.

We can now only muse about how salt cod was first cooked in Bermuda. The biggest challenge? How to make it palatable.

As with the salted meats that featured in the diets of myriad generations before refrigeration, it would have taken much skill and creativity to make salted cod edible. No doubt everyone would have been grateful to dine on fresh fish and seabirds, which were more abundant in those early days.

These days, the trimmings served with this meal have origins that reflect the palates of settlers from the British Isles down to Portugal and her Atlantic islands to Fall River, Massachusetts, the Caribbean and beyond. And as time marched on, local cooks experimented and came up with new ways to make this staple ease its way into favour.

It is likely that the additions of some ingredients simply began because they were ripe and available. Certainly, the sweet banana – an integral part of this meal – joined the party because it counters the saltiness. It continues to make a wonderful addition to a humble meal that needed more flavour.  Some cooks fry the bananas to bring an even sweeter taste to the mix. As delicious as they are, however, cooked bananas are not a regularly featured component.

And then there is the dilemma of the different sauces that are served. This is cause for fiery debates amongst aficionados who argue that the sauce they grew up spooning over their plates is most traditional.

There is no question that the colourful red of a robust tomato sauce served over the white cod and potatoes and pale yellow bananas has visual appeal and contrasts beautifully with elegantly sliced pieces of avocado garnishing the side of the plate. But the diehards raised on a codfish sauce made of melted butter with pieces of chopped hard-boiled egg swimming around in it say that the tomato sauce is just not the right accompaniment.

And then there’s the other camp of cooks who make a roux-based white sauce and add chopped egg to it and say that this is the most authentic. But there is yet another group: those who drizzle extra virgin olive oil over the meal.

Four Finishing Sauces. Four Traditions.
Chances are slim to none that someone who was raised eating their codfish breakfast with the cholesterol slamming egg-butter sauce will be replacing it anytime soon with another from the other side of the taste spectrum: the one that features cooked tomatoes and, sometimes, onions – or even garlic.

“Since when did avocado become a regularly featured item in this lineup?” is a question that has been asked of cooks who serve it with this meal.

But in addition to the ripe avocado, boiled or steamed Bermuda onions have also made their way onto the plates. The reason probably comes down to a matter of taste. Or, perhaps, they were just ready to be eaten and someone simply thought that they would add a bit of zest to the dish. Such additions make it easy to stretch the meal successfully, so that those unexpected guests who show up at the last minute are able to reap the benefits of Bermudian hospitality. Their flavours marry well with the rest, and these relative newcomers gain notoriety for improving the overall meal and providing enhanced culinary satisfaction. But for every one of us who grew up eating this sublime feast, there is no question that it is the ultimate in Bermudian comfort food. And as for the sauce of choice, anything other than what you’re used to would make the meal uncomfortable. Who would want to do that?

Codfish breakfast may be a time-honoured tradition in Bermuda, but what accompanies the codfish and how it is served are equally important.  In many cases, the toppings and obligatory sides are passed down from generation to generation. Ask most Bermudians why, for example, they have an egg sauce (as opposed to a tomato sauce) on their codfish, and they’ll tell you that’s because their granny or grandpa made it that way. That’s the way they were raised.

Desperate to find out just how different (or the same) we all are with our Sunday feast, The Bermudian set out to do a most (un)scientific poll to learn just who eats what, when and with whom. We hope you enjoy this insight into our national breakfast feast.

Not as many as we expected make it a tradition every week. Only 20 percent of you have it once a week while most of us –  63.6 percent – dig in “every once in a while.”

Of the restaurants who offer codfish breakfast, the top four in order of preference were Prime’s Place, followed by Island Cuisine, Paraquet and Bouchee. However, 70.4 percent of you prefer staying home to have your codfish breakfast as opposed to going to a restaurant, and when asked who makes the best codfish meal, 51.5 percent of you claimed that you did, while 22 percent chose “other” and told us about their husband, wife, mom, dad or nana, etc., (and even a daughter) who made
the best codfish breakfast (thanks, Dad!).

Sides
How individuals top their codfish is the biggest debate and critical to building the perfect plate. The most popular are a tomato sauce (57.5 percent), melted butter (53.1 percent) and a white sauce (17.3 percent). The white sauce may or may not have sliced hard-boiled egg in it – what our family calls “egg sauce.” To others, egg sauce is melted butter combined with chopped, hard-boiled egg.

Sticking with tradition, it’s not surprising that 95 percent of you must have boiled potatoes with your breakfast, along with banana (86 percent), hard-boiled egg (84 percent) and avocado (79 percent).

Many people who responded to the survey mentioned their preferences that were not an option on our survey. Most popular was mayonnaise, which was a total surprise to us, but then, that is the reason building a perfect plate is such an individual thing!  Johnnybread and corn bread were also options we neglected to include, but were grateful our respondents took the time to remind us about them. Both are a great accompaniment, with johnnybread, of course, being a Bermuda tradition in its own right!

The most important part of preparation for this meal is to soak the salt cod in a generous amount of fresh water for at least 12 hours. Change the water at least once to diminish its saltiness.

In the old days, the cod and potatoes were often cooked together in boiling water. These days, the fish is filleted and is more delicate. It needs less cooking time. To save on pots, cook the potatoes in a pot large enough to also accommodate the fish.

3-4 lbs. bananas, peeled and sliced across

1. Bring potatoes to a boil in pot large enough to add the fish.

2. Just before the potatoes are thoroughly cooked, turn off the heat and add the fish, which will poach gently and not become tough.

Die-hard diners of Bermuda codfish breakfast have a range of opinions on what is the correct sauce for this traditional meal.

1. In small saucepan, add butter and warm over low heat until melted. Do not let it boil.

2. Fold eggs in gently. Season with pepper. Taste before adding salt as some brands of butter are saltier than others.

1. In saucepan over low heat, melt butter before adding flour and increasing to medium heat. Continually whisk mixture while it bubbles and cooks for several minutes, reducing heat if necessary, to prevent it from browning.

2. Add milk in a slow, steady stream and continue whisking while increasing the heat slightly. Continue whisking and cooking until mixture reduces and thickens. If it becomes too thick, simply whisk in some more milk to bring it to desired consistency.

3. Remove from heat and season with salt and pepper. Add eggs to sauce just before serving‚Äîor sprinkle the chopped eggs over the sauce after spooning it over the fish and potatoes.

Tomato Sauce
This sauce may be made ahead and warmed before serving.

1. In small sauce pan or saucepan over medium heat, add butter or olive oil with onions and cook until onions are translucent before adding tomatoes. Cook mixture until it bubbles. Reduce heat and simmer about 30 minutes before adding herbs, salt and pepper. Cook another 10 minutes and serve over the fish and potatoes.