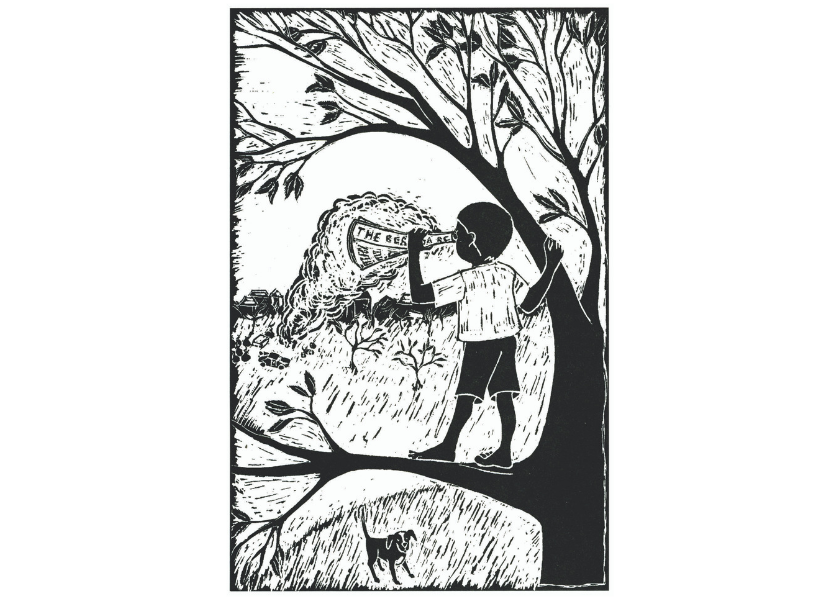 When I was born, Admiral Sir Ralph Leatham was governor of Bermuda, Harry S. Truman was president of the United States, Clement Attlee was the prime minister of the United Kingdom, bread was 14 cents a loaf, gas was 26 cents a gallon and “I’m Looking Over a Four Leaf Clover” by Art Mooney was the top song.

I guess my earliest memory was me in my crib. I was still sleeping in my crib longer that most children because we lived in a two-bedroom cottage in Ingham Vale. My mom and dad occupied one bedroom and my brother and sister, six and three years older than me respectively, occupied the other. My crib was in the hallway between my parents’ room and the bathroom.

It was a brown metal crib with one side that could be raised or lowered. It was always raised. On one or two occasions I must have attempted to escape from this prison, so chicken-coop wire was added over the top to prevent this from happening again. I would stand in my crib holding on to the sides and bounce on my bendy little legs. I was the youngest of three children and attempted to stand, walk and run long before my bones were strong enough to support my weight, and my legs were becoming bowed.

A trip to Dr. William’s office on Victoria Street soon fixed that. He told my mother to massage my legs several times a day with oil and this would help my rickets and prevent me from becoming a bow-legged cowboy. He was right. My legs grew long and straight.

During that time in my crib, because of the chicken-coop wire over the top, my brother would comb my hair, with the help of a little Dixie Peach, straight up in the middle, to look like a rooster’s comb. I would merrily pretend to crow to the amusement of all.

There was only one time that I remember sleeping in my parents’ bed. It was a cold winter’s night. You could hear the wind howling outside and I was bundled up with lots of covers and snuggled in between my mom and dad. I felt very warm and secure.

During the day it was just me and my mom at home. I would play with my Matchbox toy cars along the kitchen counter while she did household chores and listened to Housewives’ Choice on the radio. There used to be a radio soap opera that she’d listen to. She also listened to music. First thing in the morning there was march music, military music, to get you up and going. Later on in the day she liked the Mills Brothers or country and western music.

She was not a great cook or even a good cook. This had something to do with the Depression years when her mother would not allow her in the kitchen. The possibility of wasting food was avoided at all cost, but she did make an exceptionally good lemon meringue pie and cakes and bread. She would cook the life out of hamburger until it was as dry as could be and never used seasoning other than salt and black pepper. There was always lots of vegetables though, cooked in a pressure pot to save time.

The Land
On the northern side of the house my sister had a playhouse. It was made of discarded pieces of wood, a galvanised piece of tin served as the roof and some morning glory vine grew over it. The back entrance was a tunnel through the cane grass and there was some sort of shelving inside for my sister to keep plastic cups, saucers and tea set.

It was close to our northern border with what we used to call “The Land.” “The Land” was bush land, mostly sage bush, a few oleander and a couple of cedar trees. There was also an old lime kiln there that was no longer in use. Lime kilns were used to burn lime for lime wash for our roof. There seemed to be a surplus of discarded empty oil drums at that time. Most households had one, sometimes two oil drums in their yard. One was used as an incinerator to burn your household trash and the other was used to store lime, a lime barrel. There was always a large plank of wood in the lime barrel used to stir the lime, which had to be done every now and then. If left for a while, a crust would form on the top of the water in the barrel, looking like a layer of thin ice.

The view from “The Land” was breathtaking. You could see all of the North Shore, from Dockyard to the tip of St. George’s. Many years later my brother built his house there.

Inside the playhouse, my sister would entertain my girl cousins by serving afternoon tea. The boy cousins and myself were outside doing boy things, like stripping the bark off a cedar tree to make homemade cigarettes. Smoking was portrayed as being very glamourous in those days. All of the big celebrities of the day smoked. Then men were always seen with a cigarette dangling from their lips. Female celebrities were seen with long cigarette holders. The look of glamour trickled down to us children, hence the homemade cedar bark cigarettes. We’d roll the bark in Royal Gazette newspaper. When these Bob Marley-sized cigarettes were lit and inhaled, a blast of pure fire would be sucked into our mouths, which hurt like crazy. But it was all about looking cool, and we were cool.

That was also when I discovered the wonders of the fennel plant. There was lots of fennel growing on “The Land.” The dried sticks were excellent for making box kites or arrows for our bows. But the leaves of the fennel plant were great for hiding the smell of any cedar bark cigarette smoking from my mother. Just pick a few fennel leaves and rub it all over our face, hair and clothes and the smell of smoke was gone. When you are a child you forget that your parents have already gone down the road that you are travelling now. As soon as I would come inside my mother would say, “I smell fennel. Have you been smoking?”

“The Land” was also the home of bees. Wasps. Stinging bees. We called them red bees. They loved the big yellow flowers of the fennel plant, and they loved to build their nest in the sage bush. Their nest could be huge and hold hundreds of bees. The biggest one I ever saw was the size of a dinner plate, but most were around the size of a saucer and held lots of bees.

Capturing a bees’ nest was like obtaining a trophy of sorts for all young boys. Showing it off to all was a big deal and gave you bragging rights among older boys. To capture a bees’ nest took a lot of strategic planning and team work. The nest had to be completely void of all bees. To achieve this, we would throw rocks at the nest from a safe distance away. This would cause the bees to leave the nest and attack and sting all intruders. When all the bees had left the nest, someone would have to double back and take the nest even if it meant having to break the branch of the sage bush it was attached to, and avoid getting stung.

Somehow things never went according to plan. First of all we found out that bees could fly a lot faster than we could run, even if we were a good distance away. The bees were mad, very mad at someone trying to destroy their nest and would sting you anywhere they felt like. We were stung everywhere. Our nose, our ears, our face, our neck, our arms, our legs and even our feet. We would be swollen all over from bee stings and looked like we had been in the ring with Rocky Marciano. But in the end, we would have our trophy—a bees’ nest.

Willy Ingham’s Store
Sometimes we would find empty mineral bottles. Empty mineral bottles were worth sixpence apiece if you took them back to the store washed and cleaned. We would take them down to Willy Ingham’s store on the North Shore. Willy Ingham was my dad’s cousin, but my mother used to call him “Hap’ney” because she said he was cheap. A hap’ney was half a penny. Can you imagine something being worth half a penny? At that time farthings were still in use, that’s a quarter of a penny. Willy Ingham’s store sold just about everything from candies by the piece to canned goods to bottles of mineral to fire crackers for Guy Fawkes Day. He also sold the most delicious homemade ice cream.

One day my cousins and I found several mineral bottles in “The Land” and washed them out and took them down to Willy Ingham’s store.

“We’d like a package of Chesterfields, for my deddy,” we told Mr. Ingham who always seemed to be puffing on a smelly cigar.

Without hesitation he gave us the pack of cigarettes. We would head back up the hill to “The Land” and smoke the whole pack and then roll in the fennel leaves.

Around that time, which now seems very short, we had milk delivered in bottles to our door. Mr. Winchell’s grocery cart would visit the neighbourhood at least twice a week with a variety of vegetables and fruit for sale. He would blow a whistle to let everyone know he had arrived and housewives would go down to the road to meet him and see what he had to offer.

At least once a week, sometimes more, “Buzzer” Harvey, our neighbourhood fisherman, would make his way around Ingham Vale. His catch was no less than spectacular and was paraded around from house to house in a wheelbarrow, covered with a brown piece of crocus bag to keep the flies off. “Buzzer” would blow his conch shell to let the housewives know fish was for sale. He always had an amazing variety of fish—rock fish, hinds, snappers, porgies, jacks, grunts, tuna, bonita and sometimes even a small shark, which my Aunt Maude liked to make hash from. He would carry his own scale and weigh your selection right there. Cash sales only and all very reasonable.

My Aunt Kath and Uncle Leslie grew citrus trees. They grew these lovely trees on a very small piece of land in front of their house. The variety included grapefruit, pink and regular, navel oranges, tangerines, tangelos, lemons and limes. These were the finest fruit I have tasted, ever. The oranges were as big as today’s grapefruit and so full of juice. My aunt and uncle were very generous with them and every Christmas or shortly thereafter they would give us a Piggly Wiggly bag full of fruit.

Despite their generosity, the delicious fruit was far too tempting and some people would attempt to steal them and damage the trees in the process. My uncle was an electrician, and soon put an end to the thieving by electrifying the fence surrounding the trees.