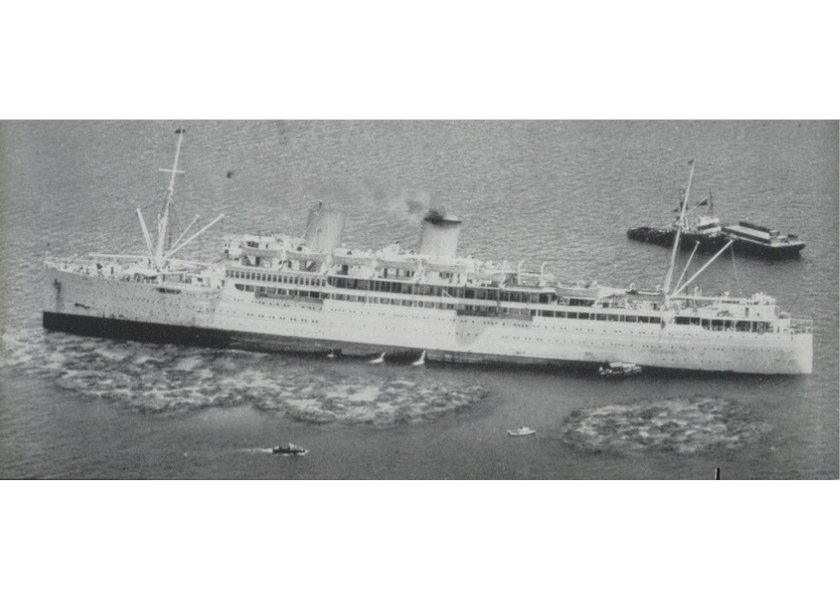 Isles of a Thousand Wrecks

This article was taken from our archives. It first appeared in The Bermudian in September 1957. It appears here exactly as it did originally.

On July 8 of this year the Pacific Steam Navigation Company’s liner Reina del Pacifico, outward bound from Bermuda to England, ran aground on Devil’s Flat while negotiating the North Channel. Early efforts to refloat her failed, and as the tide ebbed the 17,872-ton ship, the biggest ever to go aground here, took a ten to 15 degree list to starboard. Fortunately, the weather remained fair. Special equipment and experts were flown out from England; heavy cargo and fuel were unloaded to lighten the vessel; and on the fourth day the ship was dragged free the coral head. Divers examined the ship’s bottom and found the ship sound enough to proceed to England without dry-docking. The Reina was lucky. Had a storm come up while she was aground, the liner’s name might have been added to the long list of ships which have met their end on Bermuda’s reefs.

In spite, or perhaps because of Bermuda’s tiny area of about 20 square miles set far out in mid-ocean, the islands have been the scene of a startling number of shipping disasters. It has been estimated that during the 350 years of the colony’s recorded history about a thousand vessels have been wrecked on the phalanx of reefs which surrounds Bermuda. Writing in 1924, one Bermuda historian discussing these disasters said: “Tomorrow, the thousand wrecks will be a thousand and one.” Two years later a hurricane sank H.M.S. Valerian off Bermuda, with heavy loss of life, and the Canadian freighter Castaway turned turtle and sank in the same vicinity. Since then there have been others, including the Canadian National Steamship’s Prince David, which ran aground here in March, 1932, and lay half-submerged. Ultimately she was patched and refloated, and lived to give honourable service in World War II as an armed merchant cruiser. On October 24, 1936, the Spanish passenger ship Cristobal Colon (10,833 tons) ran fast aground on the northeast reefs and became a total loss. Five months later the Aristo (1,821 tons) of the Ocean Dominion Line apparently mistook the Spanish wreck for a ship underway in the channel, and piled up on Curlew Boiler, where she remained fast for four hours. Refloated, she was taken in tow by two tugs, but when a half-mile outside Northeast Breaker Buoy she suddenly sank by the bow and became a total loss.

During the stormy winter of 1955 several large ships were aground in these waters at the same time, including the U.S. Liberty ship Boy, the Italian freighter Centauro, and the Greek cargo carrier Syros.

We shall probably never know how many vessels were lost in these waters before the British settlement of the Colony, but they must have been many. For mariners of all nations returning from Central and South America and the Caribbean island had discovered that by sailing northward to the latitude of Bermuda they could pick up the favourable trade winds to take them eastward across the Atlantic. Many a ship, lured by the immaculate white beaches and beautiful countryside, ventured too close to the uncharted archipelago and ended its career on the reefs. Others, no doubt, fell foul of the surrounding rocks in the dark of night. Hated and feared by seafaring men, these islands became known to the Spaniards as “Ya de Demonicos,” the Isle of Devils.

One of the earliest known wrecks on our reefs was a French man-of-war which grounded and sank in 1591. On board her was an Englishman, Henry May, the first of his race to see these islands. The survivors of the French ship, including the Englishman, found an uninhabited group of islands thickly overgrown with cedar trees. They managed to stay alive, subsisting on edible  berries and probably fish, and build a stout cedar raft which ultimately carried them to Cape Breton, Newfoundland.

Then, of course, there was the Sea Venture, bound for the newly-established Virginia Colony, which was driven off course in heavy weather and crashed on the reefs at the east end on July 28, 1609, a disaster which resulted in the island becoming a British colony.

Ten years after the wreck of the Sea Venture the British ship Warwick, which brought Governor Nathaniel Butler to Bermuda, was lost here in a storm, and shortly after that the St. Anthony, a Spanish galleon carrying treasure from the New World to the Old, was wrecked off the north shore. Spanish authorities sought in vain to find out what became of the St. Anthony’s cargo of gold and silver, and Bermuda’s Governor even instituted a desultory sort of enquiry into the mystery, but not so much as a doubloon was ever accounted for. Had Bermuda longboats possessed the power of speech they might have had tales to tell about the disposition of the treasure, for ships wrecked on the reefs here were considered legitimate prey by the early settlers, and more than one fine old Bermuda family owes the foundation of its fortune to loot take from wrecked vessels.

The popular phrase for a ship impaled on the reefs offshore was “a turtle in the net,” and it is generally believed that some of the early colonists were not above planting bogus navigation lights for the purpose of luring ships to their own destruction. That the old game of “salvaging” from wrecks had not died out entirely became clear after the grounding of the Spanish ship Cristobal Colon in 1936. By that time, of course, the law frowned severely on such activities. One enterprising islander down Bailey’s Bay way boarded the wreck one moonless night and made a nice haul of seven eiderdown mattresses. For a few nights his family slept on the most comfortable couches they had ever laid on, then he got word by grapevine that the cops were suspicious and on the prowl. That night he roused his wife and children and told them he was taking no chances on being caught with the evidence. The mattresses were going on a sea voyage. In the dead of night the family carried the mattresses down to the beach, only a few yards away, and there the eiderdown flotilla was launched. However, wind and tide were against the man, and no amount of pushing could get those downy couches away from his beach that night. As dawn broke the man, feeling more jittery by the hour, saw the last mattress outward bound on the ebbing tide. Next morning six of them were back on his beach. Frantically he had them carried back to the house and hidden till nightfall. Three nights went by before “Operation Jettison” was successfully accomplished. Even so the man went to his beach every morning for a week afterwards, just in case.

Another man, who had “salvaged” a fine radio set from the Spanish wreck, wasn’t so lucky. Before he could even get an aerial rigged the cops nabbed him. Hauled into court he pleaded “Not Guilty,” claiming the radio set had not come from the Spanish ship. “Besides,” he argued with the prosecution, “what would I want with a Spanish radio? I can’t understand Spanish.”

A chronicle of all the vessels which have come to grief in these waters is beyond the scope of a brief article, but a few more may be mentioned here. Lefroy, in his history of the Bermudas, tells of a ship which crashed to her doom in Castle Harbour in 1669. On the east side of Castle Island is a remarkable natural arch of coral rock. Lefroy describes how the disabled ship was swept through Castle Roads to certain destruction on the coral heads within the harbour while one seaman leapt form the masthead to the top of the natural arch. He was the only survivor of the ship’s company.

The brig Adventure met her end on the north rocks in 1784. In 1792 the Grand Hannibal ran aground on the rocks to the west of Wreck Hill in Somerset. She was successfully hauled off with her own kedges but immediately filled and sank. Twenty-five years later the brig Peter cracked up in the same spot but in spite of the heavy weather prevailing at the time the people of Sandys Parish saved the crew and, what was probably more important to the colonists, the ship’s cargo. Somewhat tardily, the Bermuda Government issued a proclamation forbidding the pillage of “turtles in the net.”

In 1827 the Admiral Durham was wrecked off Port Royal. The captains’s boat reached the shore and safety, but the other boats fell foul of the reefs. Next morning, however, the seamen were still clinging desperately to the slippery and needle-sharp rocks and when the storm abated they were all rescued. In 1832 a large derelict drifted into St. George’s Harbour with her decks strewn with the mutilated bodies of men and women, a grisly mystery never solved. In the same year another derelict was found bottom up among the reefs off Wreck Hill and towed into Ely’s Harbour. In 1834 another abandoned derelict was found at the west end, and the U.S. brig Caroline was a total loss on the reefs to the west of the Somerset shore. Not long afterwards, the derelict Eliza Ann drifted ashore here, the skeletons of her crew going mute evidence of her unhappy fate.

In 1833 the U.S. brig Enterprise, approaching these islands, found the brigantine Douglas, reported lost earlier that year, lying on her side, half-filled with water and with all sails set. Boarding the stricken ship the captain of the Enterprise found a young boy who had been trapped in the great cabin when the ship struck. The lad talked of a huge chest containing $4,000 in silver which had fallen to the deck of the cabin when the ship heeled over on her side. Both the Douglas and the chest of silver belonged to John Bluck, a Bermuda merchant, and the crew of the Enterprise were arraigned before a Court of Admiralty to account for the missing money. But no evidence could be produced and the Americans were discharged. The probability is that the Douglas had been looted by Bermudian “wreckers” long before the Enterprise appeared on the scene.

To the roster of ships which have met disaster on Bermuda’s reefs might be added those that left port and were never seen again. These include the Bermuda clipper barque Pearl, which sailed east 87 years ago and was never seen again. In 1709 the Helen T. King of Bermuda left New York for her native land and vanished forever. More recently, the American schooner yacht H.S.H. with seven people on board, including two Bermudians, sailed from Bermuda for Antigua in mid-january, 1955, and except for a faint radio signal picked up by the the U.S. Coast Guard here on the morning of her departure, was never heard from again in spite of an exhaustive search of thousands of square miles of ocean by aircraft of the U.S. Navy and Coast Guard.

One of the weirdest tales of a lost ship is that of the Minerva, a stout cedar ship built in Bermuda and owned by Bermudians. Early in 1849 the vessel set out for the Far East. More than fourteen months went by without word of her, and then one morning the residents on the shores of Ely’s Harbour in Somerset awoke to see the Minerva lying on her side within the bay. By the entries in the logbook the Minerva had been abandoned far out in mid-Atlantic during the height of a violent storm more than a year before. She had drifted, helpless on the ocean, month after month until, incredibly, winds and currents had brought her home.