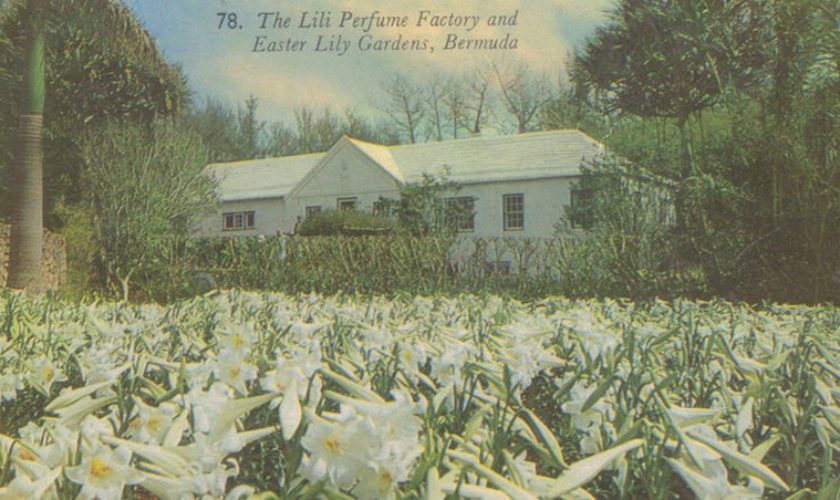 Along Bailey’s Bay road a low white house stands behind a semicircular wall against which a flower border is gay the year round.

A flagged walk leads under a trellis drooping with passion-vine. On trim lawns a tall white cedar stands sentinel to the left, a tamarind-tree to the right. In every available corner flowers are massed in a riot of colour and scent. Begonias pose against the hedge of wild fig each side of the steps leading up to the front door. Shaggy oriental poppies raise crimson heads above spires of larkspur and crowded phlox, gerbera, petunias and lacy gypsophila. Beyond, a lily-field in full bloom shines white in the sun.

This charming place is a factory, no less. The flowers are its raw material, and from the low white house Bermuda’s fragrance is sent all over the world, to bring nostalgia to those who know the Islands, and longing in those less happy.

It was in 1933 that the firm of Smith and Scott Ltd took over what was then practically a derelict old house, reputed to be between two and three centuries old. Mr. W.B Smith and his daughter Mrs. Madeline Scott launched out into a new venture that at the time sets some heads shaking and some tongues prophesying failure. For never before had the daring notion been conceived of distilling perfume from our lily harvest. The old house was enlarged so skillfully that none of its original charm was lost, the gardens and fields were dug and planted. And this season over five tons of lily-blooms are being used for the ‘Easter Lily’ perfume alone. This means over 500,000 blooms, which weigh roughly 40 to the lb. And this—the first product of the factory—is but one of seven scents manufactured through the floral year by the now flourishing little enterprise. In the opinion of one expert—Dr. Martinat the analytical chemist who has had many years of experience of the big perfume-makers in Grasse and elsewhere—Bermuda’s small factory can hold its own with any in the world for modernity of equipment and technique.

After the initial success of ‘Easter Lily’, it was natural to make use of our lavish supply of oleander for the next venture. The perfume reproduces perfectly its soft, almondy fragrance and is in good contrast to the bitter sweet Easter Lily scent. The oleanders are taken when full summer brings out all their odor, and all colours and varieties are used. Other experiments tried and successful are ‘Jasmine’, made from the wild Australian variety that has acclimatized itself throughout the islands and ‘Gardenia,’ for which the large, heavily-scented, commercial variety is grown in the Lili grounds. A winter harvest is the sweetly perfumed narcissus that starts in January, and whose essence is in the factory’s latest product. My own favourite of all is ‘Passion-flower,’ but another very characteristically Bermudian product is ‘Eve,’ distilled from our cedars and whose tangy spiciness makes it an ideal obbligato for tweeds and sweaters. This, of course, can be made all of year round.

There is an atmosphere about the factory that makes it a ‘must’ for every tourist. Small though it is, the building throughout gives the impression of space and airiness, order and gaiety. The front entrance leads through to the oldest portion, now transformed into a charming show-room, with the old waist-high fireplace used for cooking two centuries ago, the tow show cases of native cedarwood that holds the samples and an exquisitely arranged jar of the flowers they represent. Through this is the quiet, orderly packing-room in its blues and greys where the ranged packets and flasks are tempting. The flasks, by the way are designed by Madeline Scott in the shape of an inverted lily-head, and looked at upside down it is an exact replica of the blossom, white petals and all. Down a cedarwood stairway is the operative section, where in a deliciously perfumed air and to the muted whirring of little electric churns, the Lili specialties are evolved.

The two processes employed are known technically as the ‘Enfleurage’ method, and the ‘Solvent.’ The first is as old as perfume itself, and that is at least as old as when the Serpent of Old Nile emphasized her fatal charms with extract of lotus. Fresh blossoms are laid between layers of fat—(I hate to reveal that mutton-fat is excellent the purpose)—and renewed until the fat is saturated with perfume. This is then churned electrically with alcohol, which in turn absorbs the perfume from the fat. This last is removed by the simple process of filtering in a refrigerator at a temperature that solidifies the fat. The aromatic alcohol obtained forms a basis for whatever perfume is concerned.

In the ‘Solvent’ process, fresh flowers are packed into a metal basket and placed in what looks like an old fashioned hot-water boiler but which is known as a percolator. A solvent of petroleum-ether is added,  and by mechanical motion is drenched through and through the flowers till all their essential oil and wax is extracted. The solvent is then drawn off and put into a still, when the final residue—a strongly aromatic, waxy substance called the ‘concrete’—forms the basis of the scent. You will note that, in both methods, the basis only is evolved, not the finished product, the evolution of which is the hush-hush element in all perfume making. It is in the final treatment of alcohol or concrete that secret formulae are used, which makes the difference between one firm’s product and another’s.

It is generally agreed by experts that for floral perfumes no chemical compound, however ingenious, can approach in quality the essence obtained from the fresh flowers. Through their flower harvests the great centres of Grasse and elsewhere built up their reputations for fine perfume, and in Bermuda where so many scented flowers grow to such perfection, this dainty industry is peculiarly appropriate.

Through an archway of the Lili factory is the dark, cool maturing room, where in the great glass jars the finished perfumes mature like wine. No scent is fit for use for at least six months, and a year’s maturing is better.

If only all commercial enterprise could be carried out in such cheerful surroundings and so friendly an atmosphere, we should hear less of ‘labour troubles’ and fewer moans against this industrial age. Besides the natural charm and gaiety of Bermuda’s pretty little factory, the happy-family feeling that exists throughout—from the directors themselves down to the last employee in factory or grounds, is a lesson in how various races can work together in mutual respect, consideration, kindliness, and courtesy.