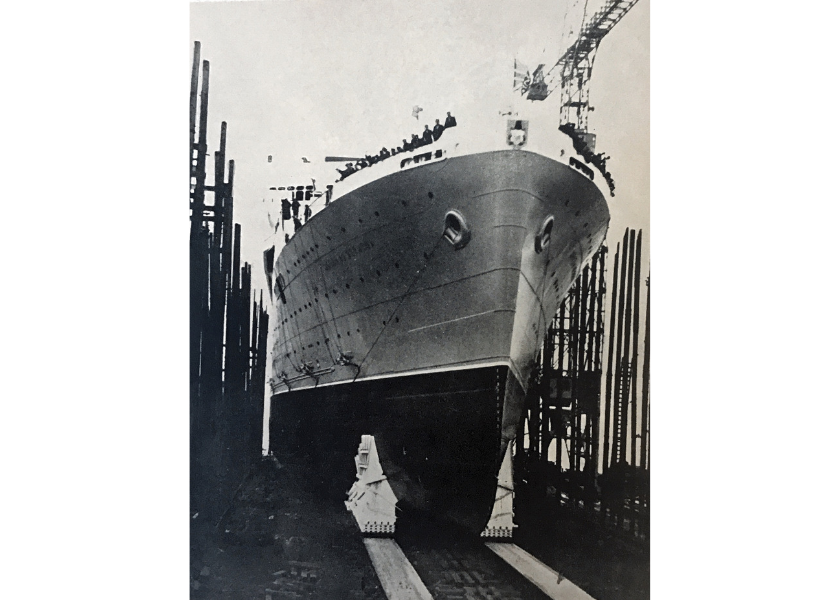 Launching of the Furness Flagship, Queen of Bermuda: November, 1932

This article was taken from our archives. It first appeared in The Bermudian in November, 1932. It appears here exactly as it did originally.

In the Naval Yards of Vickers Armstrong Ltd., at Barrow-in-Furness, England, on September 1st, a number of distinguished people and a crowd of workmen gathered to watch the ceremonial launching of the Queen of Bermuda, the new flagship of the Furness Bermuda Line that will enter the New York-Bermuda run this winter.

Lady Cubitt, wife of the present Governor of Bermuda, christened the new ship with a bottle of Empire wine in place of the traditional champagne, and pressed the button that sent the 28,000 tons of steel rushing down the ways into the river.

Baron Essendon, chairman of Furness Withy & Co. Ltd., and one of the great figures in present day shipping, was present at the launching with Lady Essendon. His Excellency Sir T. Astley Cubitt was also among the party of celebrities, which included the Honourable and Mrs. H. W. Watlington and Colonel and Mrs. T. M. Dill from Bermuda.

The Queen of Bermuda is a sister ship of the Monarch of Bermuda commissioned last November. Several entirely new developments have been included in the specifications for the new vessel. A cooling system enables the individual passenger to regulate the temperature of his stateroom by merely turning a control knob; a sun deck covered with specially prepared glass caters to the sun-bathers, and should the weather disappoint them, the mirrors in the staterooms will offer at least some compensation for they are coloured so as to give a sun-tanned reflection of even the most pallid complexion.

The contract was let on December 19th last year, as soon as Furness Withy heard of the destruction of the M. S. Bermuda at Belfast. Thousands of men are, of course, still at work, for an intricate maze of plumbing is required to install a bathroom with every cabin, and hundreds of miles of electrical wiring are needed for her lighting effects and the operation of electrical appliances. And finally, there will go aboard the geniuses of interior decoration — theirs is a perplexing and important job, for, unquestionably, a modern ship is very widely judged by the magnificence and comfort of her appointments.

Everything will have been completed by the end of the year. The Queen of Bermuda is due in Hamilton, on her maiden voyage, on the morning of February 27th, 1933.