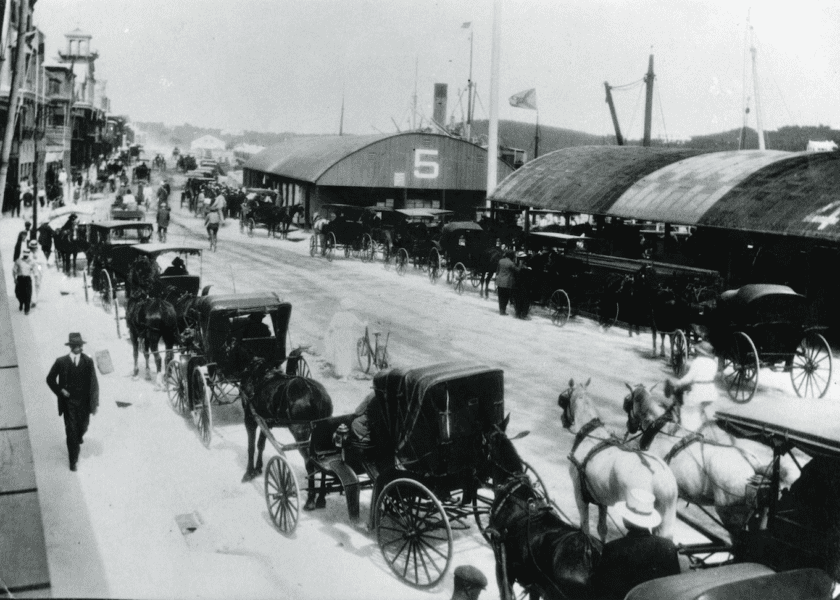 “…as wise men often remind us — with a wink of paradox — humour is a serious business, a land for which the explorer must equip himself thoughtfully” – Walter Nash, The Language of Humour

In his second letter to the editor of the Royal Gazette, titled “School is a Noosance”, Little Willie comes out swinging. He tells of his latest classwork, a “komposition” on “kindness to animules”, assigned by his teacher who Little Willie says is quite concerned about the treatment of the island’s working horses and mules—an anecdote apparently just to set up an absolute corker of a punchline that I won’t spoil here.

This is quickly followed by a yarn about his father’s troubles getting to the post office due to crowds of, what Little Willie finds to be, ill-mannered and unsightly women, who gather in the post office lobby following the arrival of the steamship.

These grievances, which Little Willie expresses through the opinions of others—though they are obviously his own—seem an innocuous enough preamble, if not tinged with classic old-timey misogyny. But he soon turns his thoughts toward far more serious subject.

Little Willie is here to talk about labour rights—specifically, his disdain for the concept in its entirety—and it is here that we find the historical and cultural import of Little Willie. Underneath the jokes and japes that adorn his letters, something far less innocent appears to lurk within the subtext. I felt it when I first stumbled into the Little Willie collection. There’s something about these letters that sets off an alarm in the head of anyone with modern sensibilities, begging the question: Are these letters just a little bit racist?

Let’s talk about it.

Little Willie isn’t the only one with pointed thoughts on the subject of worker’s rights that day. Flanking his letter are two more—and they are far less subtle. Taken in full view, this isn’t a newspaper page. It is a portrait of the fight against economic oppression. The ink may be black and the page off-white, but the scene leaps out in full colour.

I’d be well out of my depth in trying to offer historical context to the subject of Bermuda’s labour rights movement, but suffice to say, these three letters sure paint a picture. It’s a stark look at the challenges Bermuda’s labour activists were facing at the time.

Instead, we’ll use this as an opportunity for some detective work, to look at Little Willie through a magnifying glass and examine him for clues that might lead us to better understand the subtext of his letters that is lost on a modern audience.

First and foremost is the question of race.

By taking on this particular subject, the man behind Little Willie separates himself from the labourers he mocks. Labour rights are clearly not a personal concern. This brings forth two inferences that are hard to deny:

If we take this to be true, it opens up a line of questioning that undercuts Little Willie as a purely comedic figure by introducing the possibility of a racial component that seems impossible to ignore.

The question that immediately springs to mind is whether we are meant to read these letters as though they’re written by a young black Bermudian. The persistent appearance of Willie’s “unkle Tom”, along with Willie’s comedic misspellings that convey a Bermudian accent, make it hard not to wonder. You don’t have to tilt your head very far to read it as racially coded mockery, meant to show black Bermudians as poorly educated.

At yet this interpretation isn’t upheld in Willie’s actions or his fantastical tales of friends and family. Neither Willie nor the characters in his stories seem to be given any of the negative stereotypes associated with archetypal black characters you’d find in minstrel shows or American folklore. Even “Unkle Tom” is devoid of the characteristics associated with the epithet “Uncle Tom”.

What we do find in his stories are characters and details that we recognize in ourselves today, the things that make us uniquely Bermudian—the small, timeless fixtures in the lives of anyone living on this impossibly small rock in the middle of nowhere. But what seems most instructive, at this point, is to remember that we are reading these letters more than a century removed from the context in which they were written.

As I mentioned in my introduction to this oeuvre, Little Willie is a well-established character in English literature. The would likely have been far more familiar to readers in 1907 than today, and the author’s usage of the name alone could have conveyed information about his intent that is lost on us today. But putting together any sort of timeline on the evolution of Little Willie as a character, to see what the name might have represented to readers through the ages, is a task for which I am grossly unqualified.

That said, I can share with you his origins.

In his book “The Language of Humour”, Walter Nash uses Little Willie as an introduction towards a larger examination of linguistic patterns and the functions they served within the social and cultural contexts of humour in their time.

“Little Willie,” he writes, “is one of the most persistently versified figures of late-nineteenth-century popular literature.”

Mr. Nash dates the name back to Edwardian England, where Little Willie was a regular fixture in pathetic ballads about the reality child mortality. One example, from an unknown author, tells the story of a Little Willie swallowing mercury in an attempt to cure whooping cough.

Little Willie from the mirror
Licked the mercury right off,
Thinking, in his childish error,
It would cure the whooping cough.
At the funeral, his mother
Smartly quipped to Mrs Brown:
‘Twas a chilly day for Willie
When the mercury went down!

In the absence of any clues that might tell us what our Little Willie might look like, it must be decided that he is just Bermudian. If his name served a purpose for readers in 1907, it seems impossible to say. At least for now.

Which brings us back to the question at hand here.

Are these letters just a little bit racist?

For now, I’ll follow Walter Nash’s approach and try to examine the function of Little Willie’s letters. For that, there’s no better place to start than Dr. Rosemary Hall and her paper on Bermuda’s sociolinguistic history: “The mouth’s of others: The linguistic performance of race in Bermuda”.

But for now, enjoy.

To the Editor of The “Ryle Gazette.”

Dear Sur,—Dear me! what a noosance school is anyway. Us fellers had to start in yestiddy, and you no, the Base Ball Club is goin to have a match on Wednesday two, and half the game will be finished wen us chaps gets out. Las nite I had to rite a Komposition on Kindness to Animules. Teacher says there’s been so much kruelty pracktised now adays espechally in workin poor half-starved horses. It is astonishin to him to see the number of “Napolian” breed of horse that is workin in harness everyday unnoticed by the perlice. Perhaps the perlice don’t have to notice nuthin of that sort, it may not be in the ragalations. I asked unkle Tom what the teacher meant by “Napolian” breed of horses and he said “they was called that bekaus they are all Boneyparts.”

Aunt Mary says not only do horses but cows and donkeys are underfed and ill treated. Teacher calls us fellers donkeys wen we don’t noe our lessons. It must be coz we are over worked wot with gography, grammar, rithmetick, spellin and histery to lurn every day ‘cept Saturday and Sunday which days is made for goin messages and Sunday school.

Ma has to put pa in mind of everything mornins wen he is goin to town. This mornin she told him not to forget to call at the post office and pay his box rent, but he said he thought about givin up his box ‘cos he never could get near it until the day after the steamer arrived ‘cos a parsel of gurls kongregate there in the lobby and line up agin the boxes like they grow tomatter vines in a hot-house. Juggin from the crowd there, they must start as soon as the steamer is signaled and some of them dress as they go ‘long the street, to save time no doubt, as they don’t all present a very pleasing picture to behold nor do they bring there best manners out with them. Just for kuriosity sake I’m goin to the post office next time the steamer comes, and see them gurls and just notice how much mail is comin there way. Unkle Tom laffed wen he hurd about it. He allows they go there to see the males and not to see how much mail they are goin to get.

The fellers go there to see the gurls too. Pa says “why in thunder don’t they go out on the veranda where there is room to breeth.” It takes three hours to sort the letters and put them in the boxes, no dout on a kount of so many post cards bein used it takes a lot of extra time, there being so many luvly messages rit on them too. At all events, there’s no reason why the 2×4 lobby should be overcrowded for hours before the winder is open for delivery.

Unkle Tom went the “Union” meetin the other nite and says “Tom Pepper couldn’t hold a candle to that feller.” I wish I had been there, coz I never seed a feller “talk thro his hat” and unkle says that’s wot he did. Aunt Mary allows it wont amount to much. She thinks the Bermuda peeple is got too much sense to let any scallywag come along and talk them into either buyin, or doing somethin. They have been fooled two many times alreddy. Pa says “it’s a poor rule that don’t work two ways.” “Those who hire labour can form a union if they want to do so and, they can get ship loads of men and wimmen to come here who will be glad to get work at the rate of wages now paid and even for less.” The only peeple that should take notice to these kind of agitators is the government and the best thing to do with them is to give ‘em a few hours notice to pack up and get on a steamer and go where there is a larger field for their fertile branes to work schemes in, and where there is greater facilities for spendin “private fortunes.” I wish I had a private fortune coz I could go to all the cricket matches and ball games and bye Kenny and the other fellers tickets to go in. Bess and Lil will be there, but they won’t think of poor little me unless they wont me to take a note to Reggy or Sidney. Gurls make me tired anyway, just wen a feller is havin a game of alleys they wont something from the drug store or the exchange. They can’t carry a cake or a dozen eggs-home, but they can lug a big hockey stick clear up to Prospeck without a murmur. “Flea” says I don’t know the folks wait until I get older then I’ll sing a different tune.

Kenny is shouting for me, we are goin over to Hungry bay to get grapes. Vale till we meet agin.