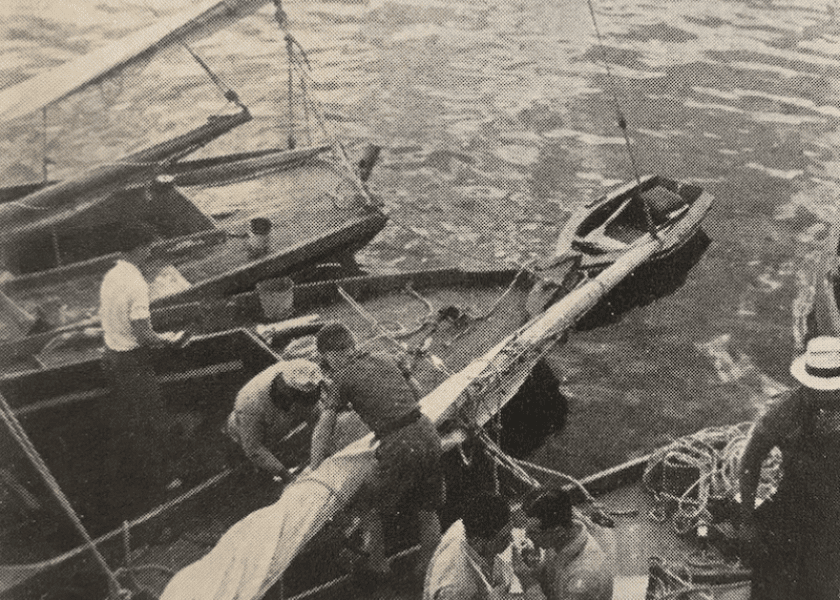 Have you heard about the fishermen in Bermuda?

We – that’s me and old Charlie Ball of the Gratitude, Carl Stubbs of the Princeton, Joe Soares of the Spanish Queen and young Louis Mowbray, who helps his father run the Government Aquarium and for a man who isn’t a commercial fisherman knows as much about the business as any ten landlubbers on the Island because he has studied the game and talked with the boys and is their friend – well, as I started to say, we’ve gotten together on commercial fishing as sort of gathered up the loose ends so that some kind of picture might be put down in black and white.

As Charlie said, it’s just a sneeze in a hurricane, for to paint the whole picture of Bermuda fishing would mean starting in about the turn of the seventeenth century when Smith wrote in his “Virginia” “…But about all the rest of the elements the sea is found most abundantly liberal, hence haue they as much excellent fish…as the large Rocke-fish from his like hue, and haunting amongst the Rockes, the Hog-fish, from his swinelike shape and snout, for this is not the old known Hog-fish, with Brussels on his backe, … the great Growper, from his odd and strange grunting; … the rest are common to other countries; as the Whale in great numbers, the Sharke, the Pilot-fish, the Sea-Breame, the Oyster and the Lobster with diuers others. And thus have you briefly epitomized Mother Nature’s benefits to this little, yet dainty spot of earth.” 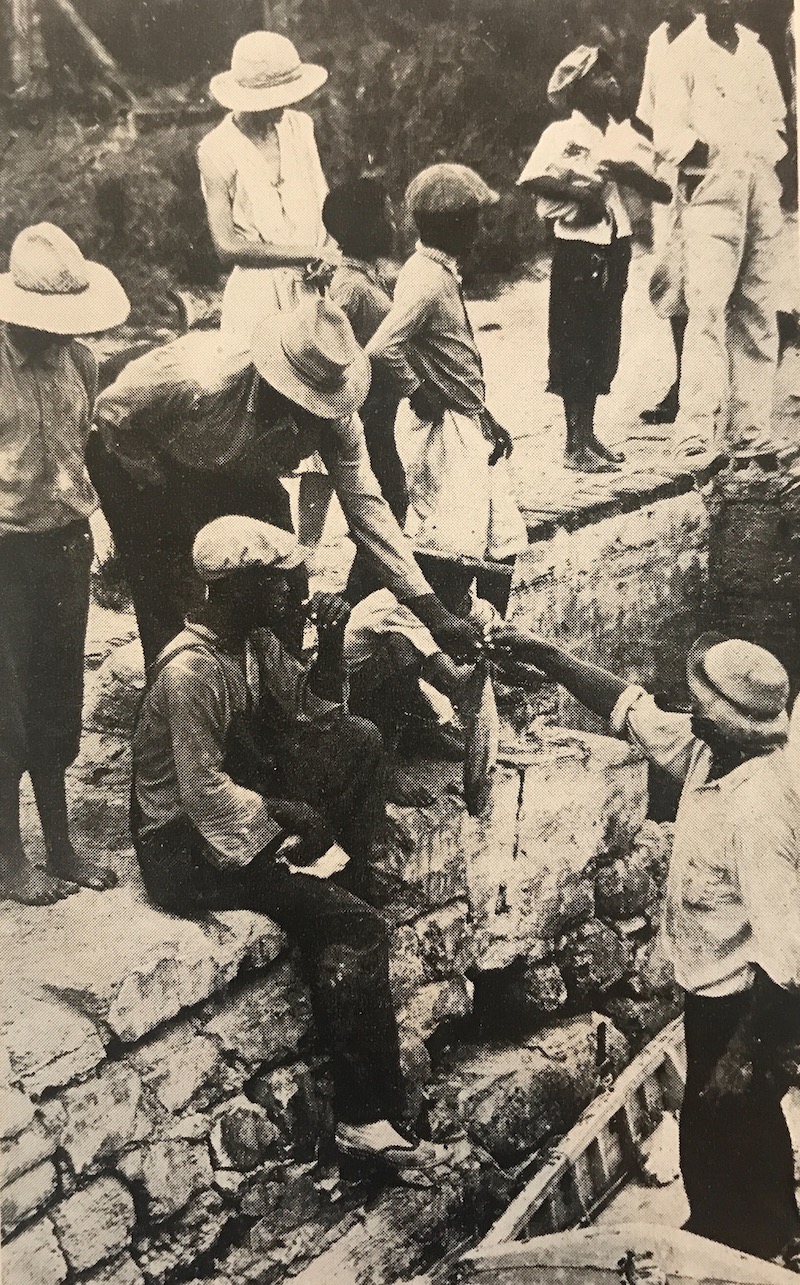 Whales are no longer seen in great numbers; last year was a bad one for lobstering but the sea remained liberal and today some two hundred odd Bermudians are fishermen by trade. Perhaps you think that is a mere handful of our thirty-thousand population, and perhaps you would be surprised to know they told me at the Agricultural Station that the estimate for bona fide farmers totaled only three hundred and fifty for 1937.

Of course the farmers are running a bigger industry that the fishermen. Yet in 1936 the fishermen brought in by handline, trap and net around 850,000 pounds of fish, which if you value it at its lowest, 6d. per pound, amounts to £21,250. It beat the banana crop of that year, 75,000 bunches worth £19,000, and it beat the chickens too.  They laid 140,000 dozen eggs for £15,000. In other words, when you watch old Charlie Ball bring his ship alongside and unload a hundred pounds of hamlet and rockfish you aren’t just looking at something picturesque, something to focus that new Leica on. You’re viewing an integral part of an important Bermuda industry.

Maybe you have never seen Charlie’s face in the stern sheets of his hundred-year old sloop but you’ve seen other fishing boats coming in around sundown. I don’t mean just in Hamilton where the larger sail and motorboats cluster alongside No. 2 Shed, but also the smaller craft – shabbier little twenty-footers with hulls and same dirty grey as their multi-patched sails that are bent to rakish spars, dark green motorboats with open cockpits and double-ended, and the rowboat fisherman. He always tries to get in before nightfall, if not earlier, for there is not middle man to ice his snappers and if he doesn’t start blowing his conch shell before suppertime he’ll have a hard parish market through which to peddle his day’s catch.

You’ve seen these different types of boats come into coves and harbours from Mangrove Bay to St. George’s. And you’ve seen the sometimes large, sometimes small gatherings of men, women and children that suddenly appear from nowhere as soon as a fishing boat is docked or beached. Some of the unofficial reception committee are there to buy that night’s supper. Others will just watch, day after day, as Joe or Mac or Manuel haul a nice one out of the well, bring it in with the fish-killer or tommy-hawk as the St. David’s Islanders call the handy iron rod, gut it, scale or “flee” it, run a palmetto leaf through its gills, tie the ends together, thus making a perfect handle for several pounds of slipperiness and hand it over to some old woman or round-eyed child who drops a few pence in his scale-flecked hand and heads for home and the boiling pot. 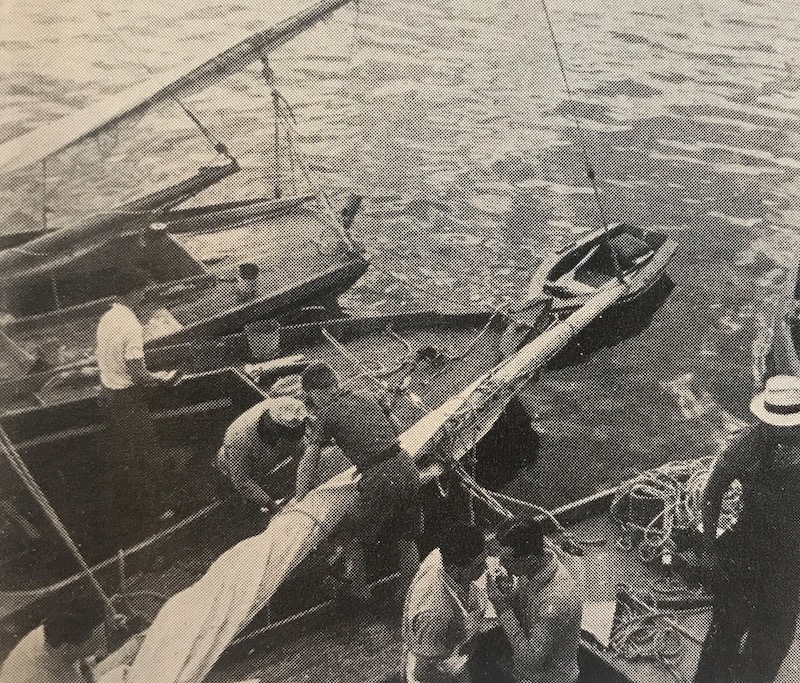 These are the small-time fishermen as distinguished from the bigtimers who don’t bother much with quayside selling or peddling through the countryside but sell, often under a yearly contract, to the markets and hotels. And the little fisherman is pretty lucky if he can make ends meet these days. In the first place the competition is terrific, especially in summer when anyone who owns something he can row and can beg, build, borrow or steal a few traps, (and plenty of the latter goes on), enters the business while farming is slack or they don’t need masons. These jumpers-in, as they are scornfully called by the year ‘round men, are no help to a market made flush by endless days of good fishing weather.

Think back and you will remember how often you heard the fish horn last summer. In every parish. All day long. Nice fresh rockfish for 7d. and 8d. the pound. Sixpence and sometimes less is the best that Stubbs, Soares and other bigtimers can get from the markets, and the markets, who want a shilling the pound from their customers, have lost part of their regular trade to the hackers and can’t always take the whole 400 lbs. of fresh fish in the Princeton’s well, but what the hell, they can run a special on lamb chops and manage to keep in business for a while yet and Stubbs can go dump his remaining fish.

Yes, fishing is tough from May until September. “It’s not tough,” an old salt from the East End told me, “it’s tougher, and the jumpers-in make me sore as hell and so does the game-fishing. Not the sports, mind you, but the skippers. Now what happens? Some fella comes down from the State. He’s having a holiday. He wants to fish. He’s got plenty so he hires a cruiser and goes out to the Banks and catches maybe thirty, maybe a hundred’n thirty pounds of tuna. He comes in and what he don’t want for hisself he gives to his skipper who he’s already paid seven pounds or so to. And what does the skipper do? He sells it here and he sells it there. Mind you, there’s plenty of fish out there. The sport don’t hurt us that way. But there’s to much fish on the market.” 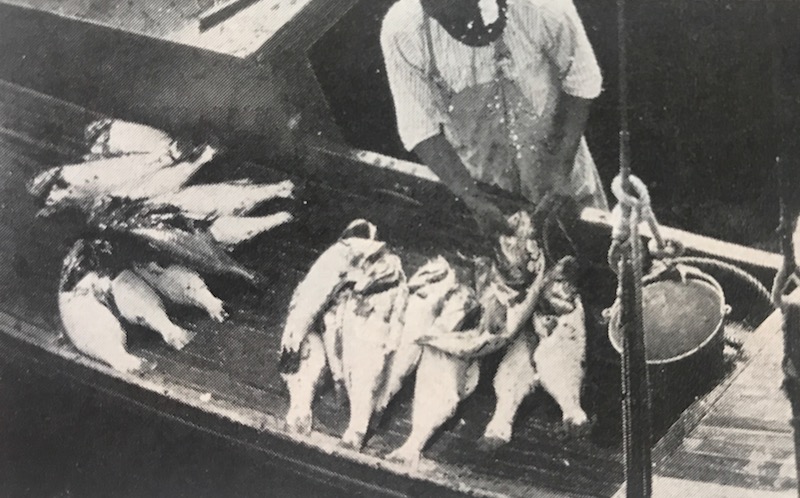 However, that makes the commercial fisherman madder than the skipper who sells the fish his “sport” has caught and that is the difference in the price he gets from the markets and that at which they sell it. Generally speaking, fellows like Stubbs, Ball, Soares or Vallis are lucky if they can get a top price of 9d. during the winter months and 7d. in the summer – it is more likely to be 8d. and 6d. – and the housewife buys that fish at a shilling upwards. Incidentally, unlike most markets the world-over, here in Bermuda they make the fisherman clean and trim up his fish before delivery and any fish over ten pounds is weighed in with its head off.

I’m not taking one side or the other in this question of margin of profit. As Roger DeCoverley said in settling somewhat similar disputes, much may be said for both sides. 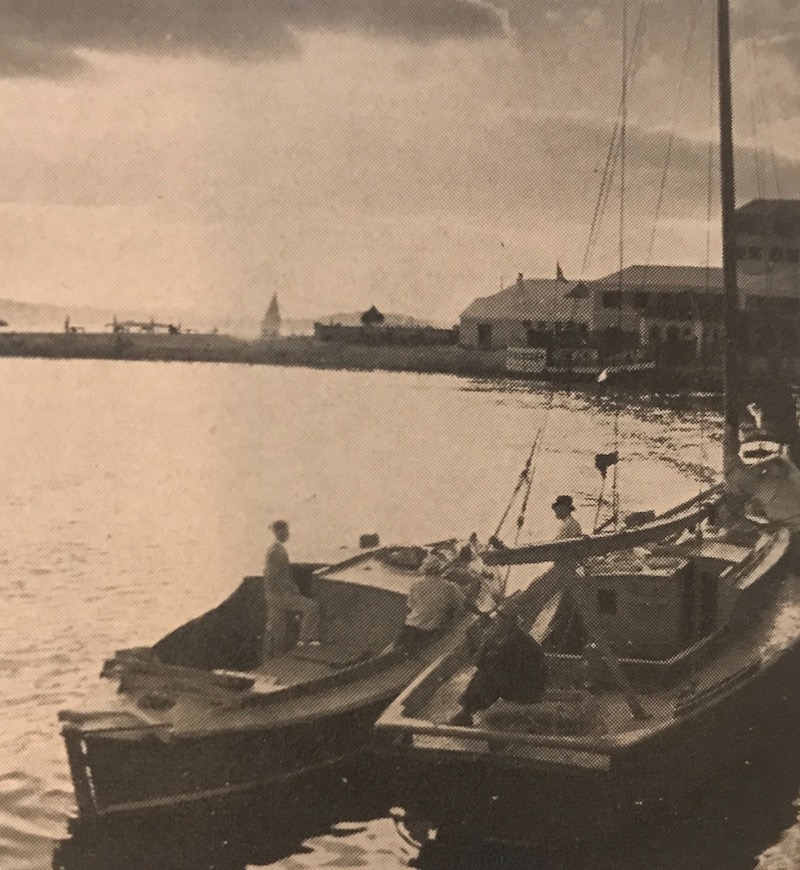 Another thing that gets their goats is the amount of imported fish that comes into Bermuda each year. For example, take the imports for 1936, the only year for which there are any statistics on Bermuda-caught fish. Approximately 494,021 lbs. of canned, fresh, smoked, pickled and shell fish were brought in from other countries. This imported fish was valued at £16,323, practically three-quarters of the value of the local fish consumed. Of this 31,902 lbs., worth £1,092, was fresh fish, and as far as can be determined was bought mainly by the hotels. If you smell a political rat and price-cutting you are on the scent, but I’ll let you dig out the whys and wherefores of Massachusetts’s codfish in Bermuda. Your findings may seem all the more incongruous when you weigh the unanimous opinion of a dozen of the experts who say that there are more fish than ever off Bermuda and provided the demand was established, they could bring in pound for pound the amount of fish now bought from other countries.

There is still another angle to this matter of supply and demand. To increase the latter it has often been suggested that Bermudians and visitors alike be made more aware of the local seafood. Think of the hundreds of places in the States, many of them more than a hundred miles inland, that are famous for “shore dinners.” You do hear about the New Windsor’s turtle soup and the lobster dinners at Tom Moore’s Tavern but for the most part the best that a Bermuda fish can hope for is a fancy French name near the top of the menu, wedged in between the soups and entrées. That the grunt of the snapper or the amberjack or the hamlet has not reached even a point of mild popularity with the public is proved by the fact that in 1936 the average amount of local and imported fish eaten per person was 11.7 pounds. If you consumed half a pound at a sitting then you ate fish only 23.4 times in that year. Not even once a week!