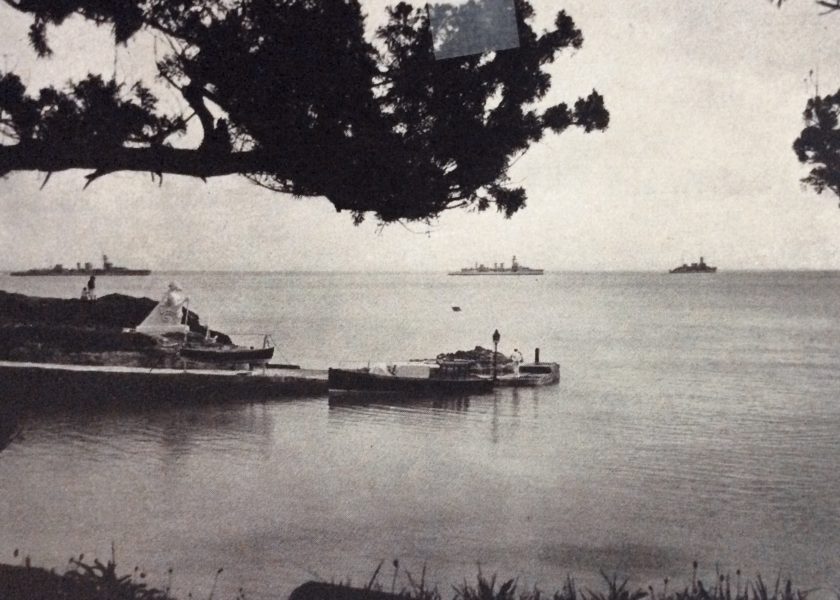 In 1813, a young midshipman off the Spartan was the innocent victim of a jealous and demented lover. His gravestone can still be seen at Abbots Bay. Here is the story. This article was taken from our archives. It first appeared in the October 1931 issue of The Bermudian. It appears here exactly as it did originally.

Just below Admiralty House on the North shore of Pembroke, this little bay makes a pleasant break in a line of fantastically pitted coral rocks. When his Royal Highness, the Duke of Clarence, was naval commander-in-chief at this station early in the nineteenth century, the bay was re-named Clarence Cove in his honour.

One of the most famous Admirals to occupy the official residence, that stands on the hill which rises behind the cove, was Lord Dundonald. It was he who built the pier and dredged the bay, and built the galleries that run from the water’s edge to cliff top.

Close by Clarence Cove is a group of cedars, and a fenced-in grave which excited the curiosity of the uninformed. It is a very beautiful spot, and the impression it leaves is accentuated by the tiny pool, with pond-lilies floating on the surface, that is found near the flat tombstone. One of the trees symbolizes the memory of H. M. S. Good Hope which was lost with her gallant commander, Sir Christopher Craddock, early in the Great War.

The gravestone that lies in the shadow of the cedars bears and inscription that is now barely decipherable. It records the death of one Francillon, a young mid-shipman off the Spartan, who was the innocent victim of a jealous and demented lover. The scene of the tragedy might be reconstructed, and the clock turned back one hundred and eighteen years to the April of 1813.

It occurred one night when an elaborate ball was being held at a house in the vicinity. The young midshipman, either deeply affected by the beauty of the scene which lay silvered beneath a full moon, or weary of being the unresisting prey of dancing dowagers, strolled down through the trees towards the cove.

Also aboard that lovely night were a pair of menials, one a philandering housemaid and the other, a footman, her most ardent lover—for Love, it seems, unlike ennui and appendicitis, was never the monopolized malady of the leisured classes.

The footman’s passion had attained such a heated pitch of intensity that rather than share the girl’s favours with another man, he swore he would kill him. He had excellent reasons for suspecting her of infidelity, and even openly accused her of enjoying secret love sessions with a handsome young stable groom.

Francillon, roving aimlessly down to the water and absorbed in the vagrant dreams of sixteen, was suddenly surprised by a fair apparition which stepped out from the shadows within a few feet of him. The girl was pretty, and the moon showed romantic expectancy in every feature of her face.

At precisely the same moment, the footman, searching hungrily for his beloved, saw her among the cedars. He paused to experience in its fullness the exquisite thrill of anticipation, and to watch, unseen, the creature who meant more to him than breath itself.

Then, with a paralysing revulsion of feeling, he discerned another figure, a male figure, almost at her side but lurking behind a tree as though fearing detection. Lacerated with jealousy, he leaped to the obvious conclusion. It was the good-looking groom who had followed her, reluctant to let his lover go warm and radiant from his embraces to the arms of another man.

Experiencing all the agonies and mortifications that assail the betrayed lover, the wretched footman crouched in the darkness of the trees. Presently, brooding miserably over the actual and imagined wrongs, his fingers crept to his knife.

Meanwhile the young middy stood motionless, his eyes on the girl who stood, unaware of his presence, almost within reach of his hand. He dared not move lest she hear him. Having no desire to speak to her, he decided to wait until she moved on. Minutes passed while the girl waited for her lover, and the lover, in his turn, waited for his rival to depart.

The inaction had the worst possible effect on the footman. Pain and humiliation gave way to a murderous rage born of a gentler but thwarted emotion.

Finally, the faithless one stamped her foot with annoyance, and turning to go back to the house, beheld Francillon in her path. They stood there, the midshipman and the housemaid, without voice or movement for a breathless moment. Then they were both startled by the sound of running feet on the grass.

The girl turned back and cried out in bewildered terror, for she saw her lover’s face inhumanly convulsed and a thin strip of polished steel flashing in the moonlight.

It was the footman, who, misconstruing the girl’s  movement as an impulse to return to her other lover, had lost all reason and self-control in his desire for revenge on the handsome groom.

Francillon, quite mystified, did not stir until he saw the girl who was standing in front of him roughly thrust aside. Then it was too late. The footman lunged at him with his knife. The blade entered beneath the heart of the man he believed to be his hated rival.

The young midshipman staggered back, collapsed, and fell out in the open where he lay inert but still breathing, his face clearly illumined by the moon’s rays, so clearly that with an appalling shock the assassin instantly recognized his victim. It was too much for the unfortunate man, and completely unhinged by his frightful mistake, took his own life within the hour.

On the 12th day of April,1813, so the inscription informs us, Francillon died at the Naval Hospital, which at that time stood on the present site of Admiralty House.