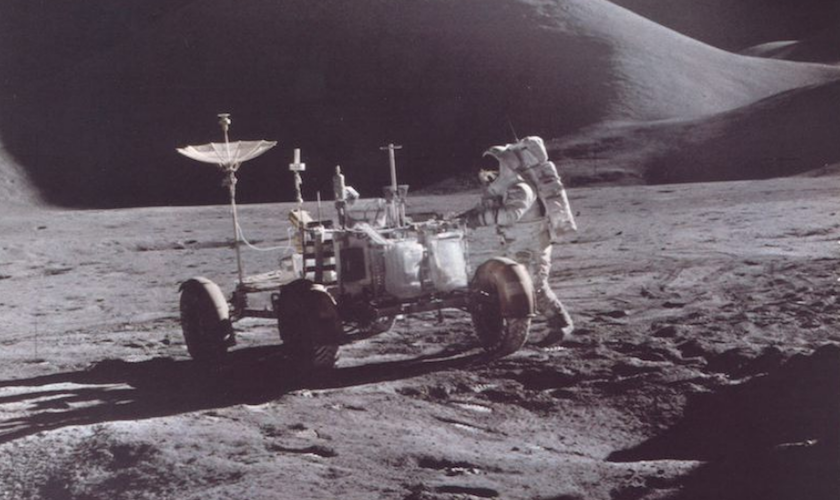 NASA Tracking: How Bermuda Helped Put A Man On The Moon

Though Cooper’s Island is now a reserve teeming with natural beauty, the environment it held in the 1960s was vastly different. Instead of the hum of insects and the chirrups of long tails, the secluded point on St. David’s buzzed with excitement at the prospect of visiting other planets and worlds. At this time, the stretch of beaches had functioning roads running through them, and the landscape was a U.S. military base, with Bermudian access restricted.

A NASA global tracking station was permitted to be built within the base in 1960, and would see nine years of frantic use, culminating in the U.S.’s triumph at putting a man on the moon, and David Bowie’s record breaking single in response, Space Oddity. In 2001, the base would become obsolete after being used for various tracking missions after technology had advanced and the space race was all but over.

So early on in the history of computer programming, NASA was unable to transfer data quickly enough between tracking stations in Bermuda and control centers in the U.S. As a result, the Bermuda station had to be manned, and some of the flight control decisions were made there for project Mercury. It had a good view of the ascent trajectory of various project Mercury missions, including unmanned flight tests and three separate suborbital flights with Chimpanzees inside the rockets.

After the Bermuda station provided invaluable data for Mercury and Gemini missions, NASA scientists were finally ready for the Apollo missions that put humans on the moon. During this time, Bermuda was an essential tracking point after the launch of the Apollo spacecraft, and nasabermuda, a site written by Bermudians working on the NASA base, offers an account of the tense atmosphere as systems whirred and the acquisition of signal of the rocket was transferred from the launch site in Cape Kennedy over to Bermuda’s systems.

Though the station only tracked the rocket for about fifteen minutes, the radar collected data that was extremely important at the most critical time for spacecraft, just after launch. During this time, the station manager, Bill Way, had the authority to destroy a spacecraft if it was deemed necessary, a heavy burden to bear when it meant almost certainly ending the lives of astronauts on board the Apollo spacecraft also.

In addition, the station was also a strategic tracking spot for U.S. military endeavors. During the cold war, which also took place surrounding the pandemonium of the space race, nasabermuda reports that the station tracked various classified objects that workers were given no further information on. “The next day we would find out from the news media of a Posiden missile launch or some other mysterious object shot into our area. Even then we could only guess as to what it was,” the site reports.

The area was still a U.S. military base at the time, and it was rumoured that ammunition bunkers built into the hillsides of Cooper’s Island actually stored nuclear missiles in the event of a U.S. and Soviet Union conflict.

More recently, NASA and Bermuda authorized a mobile tracking station at Cooper’s Island in 2012 to aid the Wallop’s Flight Facility. This project monitored spacecraft laden with supplies sent to the International Space Station, and provided radar and telemetry data.

Presently, Cooper’s Island has been protected as a nature reserve and acts to conserve many native plants and animals. With healthy reefs that act to bring back populations of West Indian Top Shells, and a wildlife watch tower that lets Bermudians look out onto the Atlantic Ocean and into the sky for birds, the reserve is a wonderful example of what conservation can achieve.

In its heyday, the NASA station also tracked birds with the help of Dr. David Wingate. This information was of interest to the airport, as it wanted to prevent bird strikes to planes on island. Tracking migratory birds enabled their flight patterns to be established in order for appropriate precautionary measures to be taken. This data was also of interest to naturalists in figuring out which birds stayed in Bermuda and which birds simply flew over.

For more information on the history of Cooper’s Island, take a look at An Island Unto Itself, written by Elizabeth Jones and published on our website.