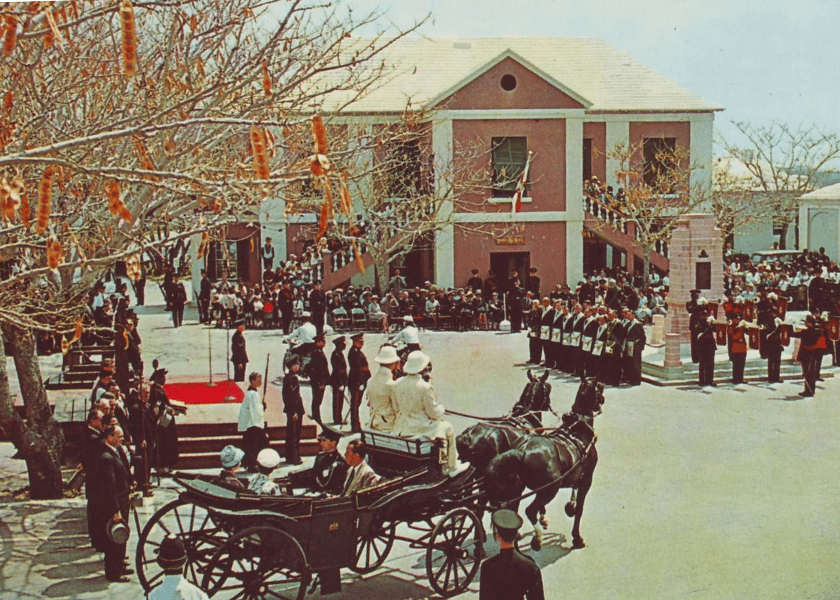 5 Things to Know About the Peppercorn Ceremony

The Peppercorn Ceremony is an annual event held in late April in the town of St. George’s. Each year since 1816 (and with much pomp and circumstance) the Freemasons have handed over one peppercorn to his Excellency the Governor in exchange for use of the historic State House. This year the Peppercorn Ceremony will take place on October 12th. While the past few years have been disrupted by Covid-19 restrictions, the hope is for the event to return to the traditional date of the Wednesday closest to St George’s Day (April 23rd) in 2023.

1. The State House was built in 1620 and hosted parliamentary sessions up until Bermuda’s capital was moved from St. George’s to Hamilton in 1815. At that time, the State House was handed over to the Freemasons for rent of just one peppercorn per year.

2. The Governor’s arrival in a horse and carriage to the St. George’s Square is marked with a 17-gun salute. His Excellency is then celebrated with a full military guard of honour and the Bermuda Regimental Band & Corps of Drums plays.

3. Although quite difficult to see by spectators, the coveted peppercorn is presented on a velvet cushion which lays atop a silver platter. Make sure to look out for it after the Governor’s arrival to the ceremony.

4. The fashions worn by those usually involved in the Peppercorn Ceremony are really something to be appreciated. Fit for a garden party, you. can expect to see wide-brimmed and colorful hats, beautiful floral dresses, regiment regalia and a feather-plumed hat worn by the Governor himself.

5. This year marks the 206th anniversary of the Peppercorn Ceremony.