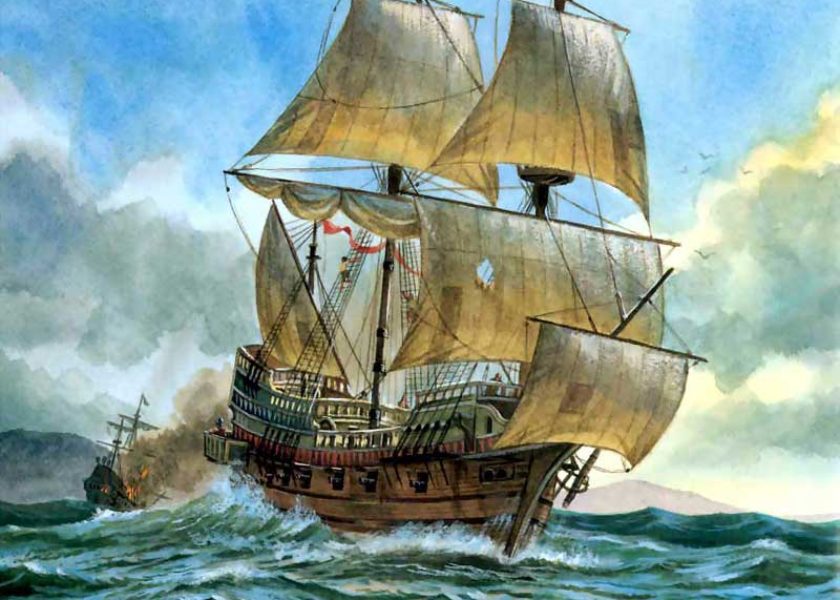 The History of the Portuguese in Bermuda

This article was taken from our archives. It originally appeared in the October 1999 issue of The Bermudian. It appears here exactly as it did originally.

In 1609, the same year the Sea Venture ran aground in Bermuda, a self-serving Dutch jurist vigorously proposed the “freedom of the seas to all nations,” disputing, no doubt, Portugal’s claims of dominion of the oceans.

Long before the British landed in Bermuda, however, Spanish and Portuguese explorers had sighted, landed, or been wrecked on, Bermuda’s reefs. In Sebastian Cabot’s 1544, Mappa Mundi, Bermuda was listed as Ya de demonios, ‘The Isle of Devils,’ so treacherous was the ring of reefs surrounding it and the myths generated by a mounting list of tragedies. The so-called Spanish  Rock in Spittal Pond commemorates the post of a lonely lookout who carved a cryptic message there — TF or TC, and the date, 1543. Replaced by a casting, the original now obliterated, Spanish Rock is believed by some to be connected to Theodore Hernando Camelo. This Portuguese adventurer had, in 1527, received a commission from King Philip of Spain to found a colony on Bermuda. He never did.

The first Portuguese to settle in Bermuda, however, arrived long after the era of Portuguese exploration. They came as imported laborers. The first arrived from Madeira, near the Azores on November 4, 1849 — 58 men, women and children. Many more would come, and still do, from the Azores.

Part of a verdant nine-island volcanic archipelago, the Azores enjoys several parallels with Bermuda. Like Bermuda, the Azores, 1,000 miles west of Portugal, is isolated in the mid Atlantic and romanticized as the lost Atlantis. Like Bermuda, whose cedars were devastated by a blight int he 1950s, the Azores suffered a blight (in the 1860s) that wiped out lucrative orange groves, which were replaced with tobacco (Bermuda’s first currency), tea and pineapples, once abundant in Bermuda. Like Bermudians, the people of the Azores are resourceful, inventive, self-reliant and independent islanders.

During the 19th Century, a major resurgence in working the land for profit was under way in Bermuda. Agriculture was, and is, important in the Azores, and it was for their farming skills that Azoreans were enticed to come to Bermuda. Portuguese immigrants were instrumental in Bermuda’s ability to produce vegetables and fruits for export to markets on the East Coast of America. It was the Portuguese in Bermuda who would cultivate the famous sweet Bermuda onion. And when agriculture went into eclipse, it was Portuguese gardeners who nurtured the beauty of these islands, which an ever-increasing number of visitors would call ‘paradise.’

Over the years they, like most immigrants, have assimilated in many ways but have, thankfully, never given up their indigenous foods. Theirs is a simple cuisine, they’ll proudly tell you. Many savory recipes begin with onion, garlic, tomato, parsley and white wine; sweets with butter, sugar and some brandy. But not so simple are the pleasures of a well-made red bean soup, spicy chouriço sausages (a marvel of flavor, texture and aroma), octopus stew, salt cod, fava bean stew, sweet egg bread, buscotos (sugar glazed cookies), malassadas (a type of doughnut), nun’s tummy, barriga de friera (sweet egg pudding), and other treats. Thanks to the Portuguese, Bermuda has seen an increase in the use of thyme, rosemary, bay leaf, garlic and kale and enjoy cross-cultural influences that have become part of the local cuisine.

Today, Portuguese-Bermudians, nine per cent of the population, are Members of Parliament, doctors and lawyers, masons and builders, business-men and women landscapers and gardeners, and many still  farm the land. Without realising it, we celebrate Bermuda with them every day, for their legacy is everywhere. I celebrate it with some regularity in my kitchen and I hope you will in yours.