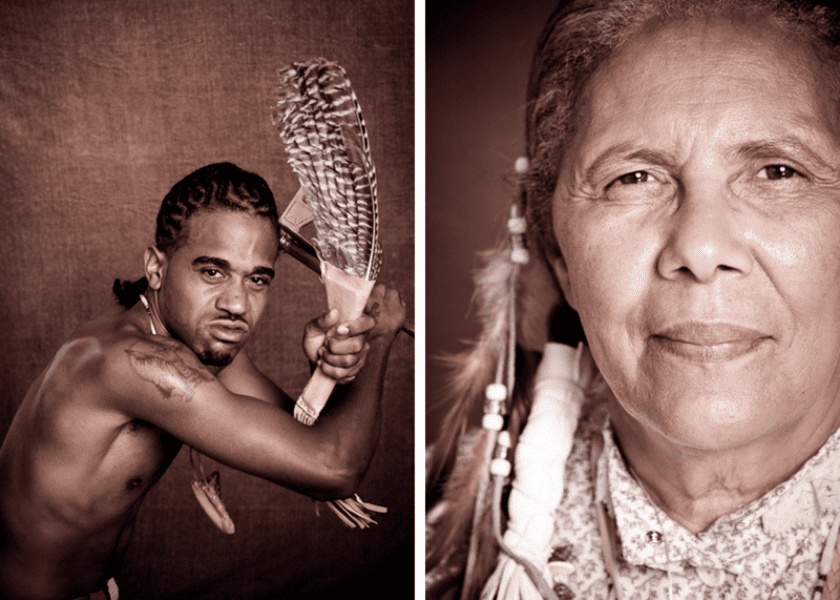 When the St. David’s native community held it’s biennial powwow in June 2009, it celebrated a connection that goes back to the early days of Bermuda’s 400-year history. The first Native American to set foot on the island was, in fact, from the Caribbean rather than North America.

Records from the time show that “one Indian and a Negroe” arrived on the immigrant ship Edwin in August 1616, four years after the first white colonists settled here. His name and tribe have eluded historians, but his role is well known to scholars of Bermuda’s Native American ties.

“His function was to dive for pearls,” said St. Clair Tucker, the author of the recently released book St. David’s Island, Bermuda: Its People, History and Culture and the son of a native islander. “It turned out to be fruitless; there were no pearls on Bermuda’s ocean floor.”

While little is known of this first Indian’s fate, the next influx of Native Americans to Bermuda is well documented. For the thousands of present-day Bermudians with Native American roots0 many of whom still live in St. David’s, their original home- the story of Pequot Indians’ arrival in Bermuda is one of survival against the odds: bloody warfare, persecution and enslavement. The Pequot War of 1634 to 1638 saw the English colonists of Plymouth and Massachusetts Bay join forces with the Narragansett and Mohegan tribes in an attempt to unseat the Pequot, who enjoyed economic and political power in what is now southeastern Connecticut.

“The colonists has guns,” Tucker said. The Indians had bow and arrows.”

Captain Anthony White, the largest landowner in Bermuda at the time, purchased these 80 Native Americans. They were sent to live on St. David’s Island and put to work as farmers, boat builders, labourers and fishermen. From that point, the connection between Native Americans and St. David’s was established- and aided, over the following years, by the island’s close proximity to the local slave market.

“When they were brought here, the trading port was St. George’s,” Tucker explained. “Slaves were sold in the square, and masters from St. George’s and St. David’s got the first pick.”

St. David’s was completely isolated in those early days; in fact, it remained accessible only by boat until as late as 1934. The Native Americans of St. David’s welcomed African and West Indian slaves into their community, but Bermuda’s white population often looked down on them. This stigma caused the people of St. David’s to intermarry over the course of the ensuing centuries. According to Tucker, it was common for a native, in previous generations, to live his entire life without leaving St. David’s Island.

Indeed, for many years, St. David’s Islanders with Indian roots were simply referred to as Mohawks, no matter what tribe their forefathers came from.

Fortunately, any stigma associated with being a St. David’s Islander of Native American heritage has vanished, to be replaced- especially in Bermuda’s quadricentennial year- with a renewed interest in celebrating it’s unique culture.

At the Native Bermuda Powwow on the weekend of June 20 and 21, St. David’s Islanders will share their traditions with their extended families, including visiting members of the Pequot tribe from the U.S. locals looking to learn more about Bermuda’s Pequot connection are welcome too, and attendees can expect a weekend of storytelling, Native American dancing and, of course, beautiful ornate traditional costumes. The St. David’s Islanders will be sharing their expertise in traditional pursuits like fishing, piloting, lobster-pot making and drumming. There will be plenty of special St. David’s delicacies on offer for foodies and Gombey performances as a nod to the West Indian influence on Bermuda.

For St. Clair Tucker, the powwow is an important part of Bermuda’s 400th birthday celebration because it acknowledges the heritage of thousands of the island’s oldest families and serves as a reminder of the darker side of out collective past, when buying slaves as chattel from the mainland U.S. was commonplace.

“The Native American involvement in Bermuda over the years has been very significant,” he said. “They weren’t always well treated. Some of the stories aren’t pleasant, but it’s better that we know our history.”

He added that the English colonists who originally enslaved the Pequot Indians might well be surprised that their descendants are now celebrating their links to a troubled time. “The English kept great records,” he said. “Little did they know that we’d read them.”