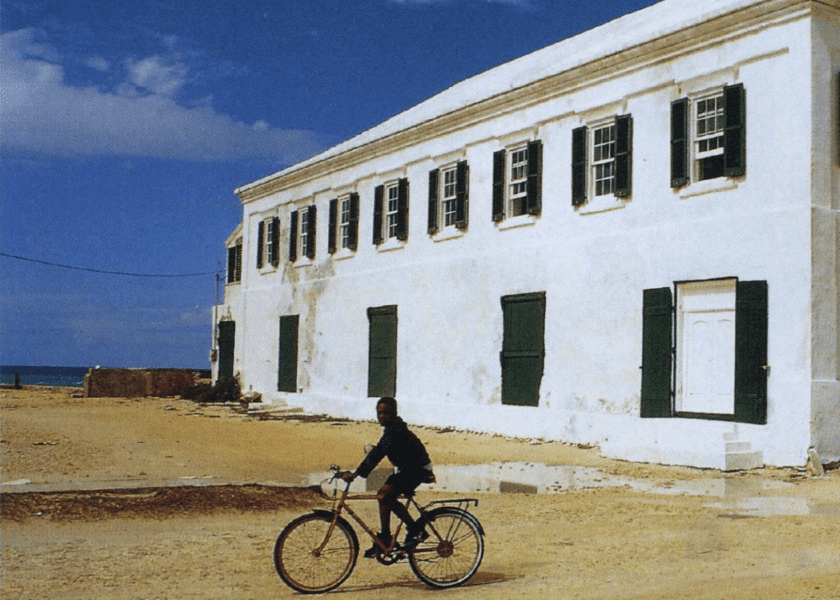 This article was taken from our archives. It first appeared in the August 1996 issue of The Bermudian. It appears here exactly as it did originally.

Families and homes in the Turks & Caicos prove historic maritime links with Bermuda.

Irene Been (‘Bean’ in Bermuda, the origin of many Turks Islands families) takes in guests at her Bermuda-style wooden house of the late 19th Century on the beach at Salt Cay, where the sea has been pounding from the west these last days. When the gales reach that quarter, according to the locals, they stay there for some time, or as we say in Bermuda, “the wind from the east blows four days at least.” These are the contrary quarters, for in Bermuda the prevailing wind is from the south west; here in the Turks Island it is from the east. And it was this easterly breeze, almost free of humidity, which was an essential part of the salt-making industry of Turks and Caicos Islands, upon which the early financial fortunes of Bermuda were founded. The wind is a delight—warm (75 degrees this February day) yet cooling— whether out on a walk or under cover at home. To Bermudians, saturated by the humidity of our climate, it is the next stage to heaven. Windows are opened wide, and throughout the night the surf beat a lullaby, accented by these puffs of natural air-conditioning.

Salt Cay is thought to be a potential UNESCO World Heritage Site and much of that heritage hails from Bermuda. Looking for ways to augment their meagre living in the late 17th Century, Bermudian seafarers in their West Indies travels found a group of uninhabited islands at the southern end of the Bahamas archipelago. Without rain through most of the year, and further dried by the easterly trade winds, the Turks Islands of Salt Cay and Grand Turk contained natural deposits of sea salt in shallow inland basins. Here was an ideal spot to exploit for the production of salt—the so-called White Gold of the days before refrigeration. By the time of the dissolution of the Bermuda Company 1684, the Bermudians had established themselves on Salt Cay and their salt-raking trade began to flourish. Each year in February, freed men and slaves made their way to these islands to rake salt. While this work progressed, the little Bermuda sloops went on to the West Indies for trade or possibly plunder.

Returning to the Turks, the ships began the second leg of a three-part trade, taking the salt north to the American mainland colonies and to Nova Scotia for the fishing industry. In the latter place, the salt, intended as fish preservative, was traded for cod and other species from the Grand Banks. Working their way back home, the Bermudians sold some of the fish on the Eastern Coast and purchased necessities for home. Thus did salt, another bounty of the sea, lay the foundations of many early Bermuda fortunes, partly at the expense of the enslaved peoples of African and West Indian Origins.

Salt was the lesser sibling to ‘King Sugar,’ the production of which in other West Indies islands fuelled the barbaric trade in slaves out of Africa and bankrolled the Industrial Revolution which swept England to the forefront of European nations by the Age of Victoria. Some of these Africans, mixed with the indigenous peoples of the Caribbean and Europeans, eventually ended up in Bermuda in servitude. Here the plantation system of the Caribbean, for reasons of geology and geography, was untenable. As the 17th Century wore on, shipping became the mainstay of the Bermuda economy and many slaves served with distinction on their masters’ ships.

So it was that the uninhabited Turks and Caicos Islands became a part of Bermuda and the traffic in peoples and names from one to the other has continued into present times. Even today, the Basdens, Talbots, Harriots, Tatems, Smiths, Misicks, Friths and other family names are to be found in the Turks Islands and Bermuda.

Settlement was a two-way transfer, with the influx coming from Bermuda in the 17th and 18th Centuries. After the American War of Independence, ‘Loyalists’ to the British Crown in what became the United States of America became refugees. Ejected from their homes in Georgia, the Loyalists had established themselves in East Florida, only to find it given to the Spaniards in exchange for the Bahamas Islands in the Treaty of Versailles in 1783 which ended the American Revolutionary War.

They were given a short period to sell up and were offered lands in the Bahamas chains by the British Crown. This led to the settlement of the Caicos Islands, uninhabited since around 1513, when visiting Spaniards found only one man remaining in the indigenous population. It is estimated that the peoples of the Bahamas archipelago numbered around 80,000 when they had the misfortune to be discovered by Europeans. These Lucayan (as the Bahamas was known in pre-history) Taino peoples had been exterminated from the Bahamas and Turks Islands by slavery and European diseases within 20 years of the fateful arrival of Columbus’ ships in 1492.

Recent archaeological excavations on Grand Turk, the seat of the government of the Turks and Caicos, have revealed through radio-carbon dating the earliest site of the Lucayans in the Bahamas archipelago, around 700 A.D. Archaeologists from the University of Florida at Gainesville, in co-operation with the Turks and Caicos National Museum, have found a number of cooking pits preserved under several feet of silt from the periodic flooding of a nearby tidal creek. The pits contained conch shells, possibly used as stools for cooking pots, and the burnt remains of turtle and fish.

It seems the Turks Islands were a pivotal spot in the northward settlement of the other islands of the Bahamas chain. Canoes from the south, apparently from Santo Domingo rather than the Antilles islands, had to pass by the Turks and Caicos, which led to the establishment of a powerful chiefdom to exploit the passage. Further archaeological work in Haiti and other islands of the West Indies, as well as in the Turks and Caicos, will no doubt expand this picture of the first peoples of the eastern Caribbean Sea.

It remains fact, however, that the Lucayan peoples were quickly destroyed by the Spanish, leaving the Bahamas cleared for European settlement, though the Spaniards had little interest in these smaller islands. Remains of the Tainos have been found on Salt Cay in the last few years, contrary to earlier suppositions that there were no such sites there.

In the mid-17th Century, the Bermudians saw the possibility of developing a salt industry and by the 1670s had begun work on Grand Turk, later expanded to “salinas,” or salt pans, on Salt Cay and lastly in the late 19th Century to South Caicos.

The Bermuda sloops came to the Turks Islands every February and left slaves, other workers and overseers to produce the salt over the next six months. The ships went trading in the Caribbean, while the others worked on the islands of “salt, sand and sorrow.” Later on, a permanent settlement was established on Salt Cay, but most of the buildings were destroyed by hurricanes in the early 19th Century.

This salt production, along with ship construction at Bermuda, laid the fortunes for the early Bermudian economy. It was this staple trade in salt, not privateering, which founded the prosperity of the Island for the majority of Bermudians in the late 17th and 18th Centuries. Many Bermudian families were engaged in this trade, including the Harriotts, one of whom, Gladys, marked the end of the family name in Bermuda on her death a decade ago.

In the 1830’s, the wealth generated by the salt trade brought forth the erection of a number of fine buildings in the Turks Islands, the foremost structure being the so-called “White House” owned by the Harriotts on Salt Cay. This building was so named as it was painted white and had the only stone roof in the Bermuda fashion in the Turks and Caicos. It remains in the possession of descendants of the Harriott family; Roselie Harriott, Gladys’ niece who was born on South Caicos in the 1930s, happened to be in residence during our visit.

Roselie kindly gave us a tour of the building, now owned by her brothers in the United States. The building has three storeys, but only two are apparent from the exterior. The uppermost floor was the domestic quarters and each room has several windows, with sashes and shutters in the Bermudian architectural vernacular, painted green on the exterior and white inside. The constant trade wind from the east, and the high ceilings, made for a cool and comfortable interior, supplied with pieces of Bermuda cedar furniture.

Below this floor, the front two-thirds of the house consisted of a single two-storey room extending into a basement area for the storage of salt. Rising along the centre line of the room were five great poles that supported the floor joists of the domestic arrangement at third-storey level. Three great doors on two sides of this storage room allowed the salt to be deposited out of the weather and several mounds of it are still to be found on the sand floor.

The White House is one of the icons of Bermudian legend and is often said to have been built of Bermuda stone “brought out in ballast.” There are manifests that indicate the shipment over the years of Bermuda stone as cargo and ballast, but there is little evidence of it in this building or others in the Turks Islands.

This is not to pour salt on the often comfortable past Bermudians have sometimes built for themselves, but to point out the facts of history. While Bermuda cedar is much in evidence in many of the buildings in the Turks Islands, it is difficult to ascertain how much of the stone is actually Bermudian, since the local Turks stone is a very similar Aeolian limestone. Certainly, the lower floor and basement of The White House are Turks Island, not Bermuda, limestone. The roof may be made of Bermuda slate, but without laboratory analysis it is impossible to gather a definitive answer.

To scholars, the truths of history are more exciting than the ‘facts’ of time-spun legends. Our trip to the Turks Island was one of reconnaissance, a voyage to ascertain the nature of Bermuda heritage in those distant isles. The fact that things may not be as they were always assumed simply adds to the interest and to the quest for a fuller understanding of Bermudian connections with our salt colony of yesteryear.