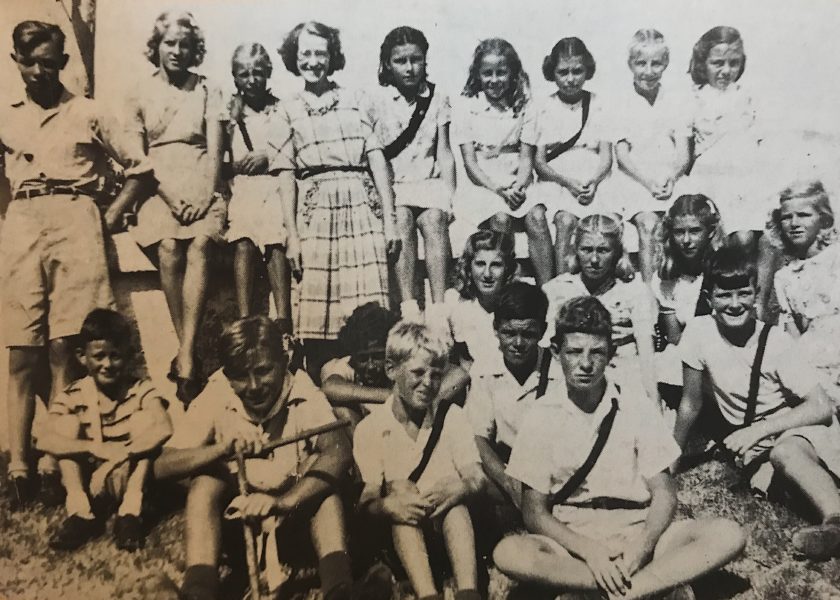 This article was taken from our archives. It originally appeared in the March 1999 issue of The Bermudian. It appears here exactly as it did in print originally.

Mention the name ‘Prospect’ to children in Bermuda today, and they immediately think of CedarBridge Academy, Police Headquarters and the National Stadium. Older ones will remember a variety of schools such as Devonshire Academy and Prospect High School for Girls. But for adults whose memories of Bermuda go back to the 1940s and beyond, Prospect is synonymous with the Garrison, headquarters for the British Army. In the late 1860s under Governor Sir F. E. Chapman, about a quarter of Devonshire’s land was appropriated for military purposes, a procedure that according to Roger Willock’s Bulwark of Empire displaced about half the families living in that parish. The land stretching from Police Headquarters down to the North Shore became home and workplace to British soldiers and later to some Bermudian members of the Royal Engineers and the Bermuda Volunteer Rifle Corps (B.V.R.C.).


The Garrison was in many ways a self-contained world, with its own military hospital overlooking Tynes Bay, its own chapel and its own school. In addition, there was a NAAFI or store where army personnel could buy provisions and, of course, barracks for work and for living quarters. Vestiges of that world still remain. Every morning CedarBridge students walk or drive past the Gymnasium Road sign to approach their school. But they probably don’t know the road was named for the army gymnasium, originally situated on the left side of the road, and a social centre for Christmas parties, whist drives, dances and other activities.

Passerby probably also don’t know the pink building with the clocktower was the Guard Room. A sentry was always on duty there and it housed two or three cells. Today, this old building looks tiny, dwarfed as it is by the height of CedarBridge, but during those Garrison days, it dominated the hillside. Inside the police barracks, you can see a building with a plaque saying ‘VR 1900.’ During the Second World War, this was home to the Command Headquarters. The military hospital remains, too, although it is now owned by the Bermuda Government and used by Works and Engineering.

Other landmarks of the Garrison have completely disappeared. Below the police barracks was a park, complete with bandstand where the army band would give a concert every Sunday after church. The Garrison church has also disappeared. Where CedarBridge’s tennis courts and carpark now stand, was a square used for drill and parades. The church was in the north-west corner of that square. Some Bermudians used to attend its services because of the music. They liked to hear the band play during the service. And beyond the square was the band block where all the bandsmen lived and did their practicing.

But for people who spent their childhood at Prospect, the one building they remember clearly is the Garrison School, which remained open until 1951. That building is still there — it’s one of the double-storied buildings with verandahs currently being used by the Police. At the beginning of the 20th Century, the school was confined to just two of the building’s rooms.

School Days
Close to 100 students attended the school, all children of the military or civilians employed by the army. On the whole, they were fairly isolated from Bermudian children, especially as there were no organised sports and therefore no opportunity to play other schools. The curriculum was somewhat confined as well, although students received a thorough grounding in reading, writing, arithmetic, history and geography. In tune with the racial segregation of the time, the children were all white, although mixed in gender.

However, Garrison students in the 1940s during the Second World War were not so isolated from other Bermudian children. That’s because they were Bermudian themselves. Take the Johnson family. In 1932, Henry Johnson joined the Royal Engineers. He was to have eight children and most of them attended the Garrison School, as was their right. Schooling was not free. It cost sixpence a week, or five shillings a term. Siblings Donald, Doris and Stanley Johnson remember vividly their time as Garrison students.

“We started school at five and left 13 or 14. We had three classrooms in our day: one for children ages five to eight, one for ages nine to 11, and one for the older students.”

The day would begin with an assembly in the gymnasium. There would be a prayer, after which everyone would sing the British, American, Canadian and French national anthems (in other words, the anthems of the Allies.) In the classrooms, the students would sit in rows behind wooden desks with inkwells. Dip pens and bottles of Quink ink were vital pieces of scholastic equipment.

“Even when ballpoint pens came out, we weren’t allowed to use them,” remembers Doris. “Teachers thought you couldn’t shape your letters properly with ballpoints.”

Their curriculum had the same emphasis on the three Rs. General knowledge was deemed very important and treated as a separate subject. However, there were additional arts and crafts activities, such as hook rugging, raffia-making and basket-making. Boys and girls alike were taught to knit. “Remember?” says Stanley, laughing.”Knit one, pearl one, drop one.”

They mostly knitted scarves as part of the war effort. But Valerie Bull, who was also at the school from 1942-6 recalls knitting a balaclava on four needles. “The wool I used was horrible because it was so rough. We’d do a lot of knitting and while were doing it, the teachers would read to us.” Donald clearly remembers basket weaving with a Bermudian teacher called Miss Munns. That’s because he was disciplined for handing her a pair of scissors point first. The discipline then was very strict. Briton Gladys Langford ruled as headmistress, and Valerie remembers her saying, “If I had been a man, I’d be a field marshal by now.”

Neither she nor her all female staff had any problem using the strap nor the cane to keep children toeing the line. “The cane had a hook on it,” Stanley laughs. And Doris has a vivid memory of being lightly struck on the hand on her birthday. “I had to bring a new cane to the teacher and she said I had to be the first to get it because it was my birthday!”

Despite the strictness of the teachers, the Johnsons’ memories of the school are happy ones, even though the war was a daily reality. Often they’d hear the air-raid alarm — the signal for students to run into trenches dug near the Garrison Park. Blackouts were a reality too. Heavy blankets would cover the windows. “Because we had the military all around us,” explains Donald, “I think we felt more secure. We never felt afraid. They were there for us. Brigadier Maconochie (Commander of the Garrison) visited us once a week and he’d always stop and talk.”

According to Doris, everyone knew who the officers were and their children also went to the school. And there was a good relationship between Bermudian and British students. Wives of army staff and mothers were involved in the school, too: some ran the library and the canteen while others helped by teaching sewing and crafts.

Like the Johnsons, Valerie Bull’s memories are positive. She was at the school because her father, George Eatherley, was in the Bermuda Volunteer Engineers and an assistant in the ordnance department. “Those were very, very happy times. I felt we had a charmed life because we felt treated as if we were special, as if we were the army’s own children.” She remembers being given lots of poetry and having to sing a medley of old English songs. But what particularly pleased her was being a Girl Guide at the Garrison. “We used to win all the competitions because the soldiers used to teach us medical aid and signals for our badges. Douglas Brewer, a soldier in the Royal Engineers, was our leader and we never felt it was odd we had a man for a leader.”

From a medical point of view, the children were well looked after. They got free physicals and shots in a small clinic by the school. “Dr. Foster used to give us shots at the Garrison Hospital,” says Doris. “After we had the needle he’d always give us a lollipop or a toffee.”

There were school treats as well, usually in the form of picnics held at Robinson’s Bay on North Shore. Every May, there would be a spring fair held in the waterside park and sometimes at the Watlington family’s Devonshire property Woodside, where the children would dance around a maypole. As for organised sports, they were available in the 1940s. “We were taught cricket, netball and rounders. And we also had swimming lessons at Robinson Bay,” Valerie says.

Another former Bermudian student remembers one teacher’s novel approach to teaching physical education. Mary Ann Madeiros attended the school from 1942-1945. (Her father, Jeremiah Repose Moniz was in the B.V.R.C. and was the gardener responsible for growing all the vegetables in army-owned agricultural land.) “The teacher would tie a sneaker on the end of a rope. Then she’d swing the rope and we’d have to jump over it. If you didn’t jump high enough, the sneaker would hit you!”

All the Johnsons agree the school shaped their lives and their attitudes. “It taught us respect for our elders,” Doris Says, “It was ‘Yes, ma’am, no ma’am.”

Respect meant students standing every time an adult entered the room, or every time they asked or answered a question. And that military aura permeating their lives encouraged them to give service to their country. “I had no problem joining the cadets and the army further down the road,” Donal says. And it can be no coincidence that brothers Carl, Maurice, Malcolm and Stanley all joined the Fire Brigade.