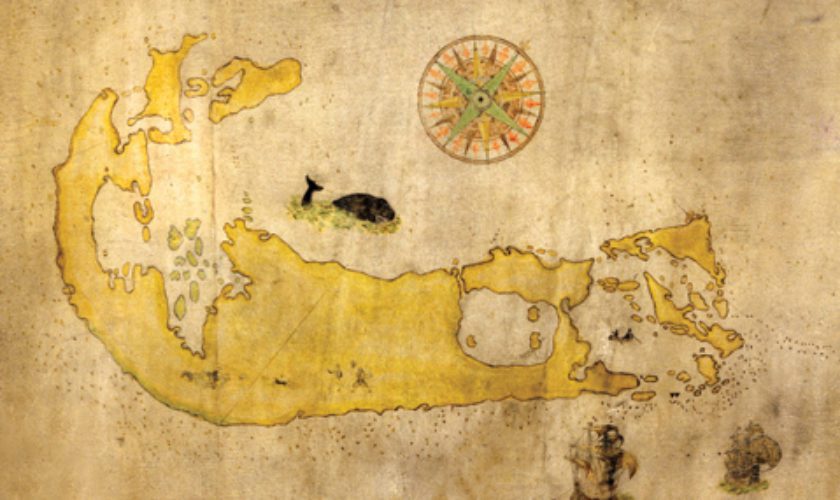 Sir George Somers has been receiving a lot of attention in recent years. We all know (or should, by now) the story of Bermuda’s founding and the role that he played in the “wreck and redemption” of the Sea Venture and her people. It is an irresistibly dramatic story: a war veteran is called out of retirement to save a flagging mission of national importance. He meets a sudden, unprecedented storm but, against all odds, survives and leads his wards to safety. He discovers the truth about a mysterious island that helps his nation prosper. The committed hero dies tragically while trying to save others who will starve otherwise. It sounds like any number of Hollywood action flicks.

The epic of Sir George has additional literary elements: poetically (and akin to a Greek myth), the fallen hero’s heart was buried where a new town and capital later sprang up. It also has a villain of sorts: a greedy, nefarious nephew who ignored our hero’s dying wish that he return with food to Virginia and went instead to England to claim his uncle’s estate. The story ends with a pomp-filled funeral staged at the hero’s home. One can almost see the credits rolling down the screen. In Sir George Somers, Bermudians have a famous founder and a literary tragic hero. Seldom are historians (or movie directors) given such rich material with which to work.

Bermudians have made much about how Sir George and his castaways “saved” starving Virginia with their timely arrival bearing loads of Bermudian fish, birds, turtles and other foods. We can rightfully connect this island’s story to the larger epic of England’s global expansion, claiming for Bermuda a prominent role in the opening act. “Saving” Virginia took many forms, though. Bermudian food saved a few lives, but the Sea Venture story arguably saved the whole colonial venture. Historian Lorri Glover argues that it was the many apparent examples of divine intervention in saving the Sea Venture castaways from certain death and bestowing the Edenic island upon the Protestant English nation that mattered most.

Virginia Company spin doctors used these to distract the public from the awful state of Jamestown in 1610. Food from Bermuda was welcome, but more arrived a few weeks later with the Fourth Supply Fleet. The year 1609 does mark the twinning of Bermuda and Virginia as closely integrated ventures and set into motion the forces that led to Bermuda’s rapid, deliberate settlement. Sir George’s most enduring contribution to Bermuda actually occurred after his death. As the Virginia Company set about promoting colonization and recruiting pioneer settlers in 1611, it effectively canonized Sir George by bestowing his surname upon the new colony. Renaming Bermuda “the Somers Islands” was a clever case of cartographic imperialism, whereby promoters cannily substituted the name of an English knight for a Portuguese mariner upon the world’s maps. In giving his name to an entire colony, Somers surpassed Francis Drake, Walter Raleigh, Martin Frobisher, Humphrey Gilbert and his other Elizabethan seafaring peers.

Sir George’s role in Bermuda’s colonization gained him a prominent place in early American and Bermudian history. The links between the Sea Venture story and William Shakespeare’s The Tempest have spread Somers’s fame even further to literary circles. But who was he, really? What did he do before his Bermuda adventure made him into an epic hero? Does he deserve such fame? In short, who was the real George Somers?

I pondered these thoughts during a trip to Bermuda in June 2009 at a particularly appropriate moment, aboard a fast ferry as it hovered near the Sea Venture’s sunken hull as part of the Historic Heartbeats commemorative tour programme. At that moment, I gazed upon Bermuda as Sir George would have seen it 400 years earlier—minus the storm swell, whitecaps and high winds. A few hours later, as I visited his memorial in the St. George’s park that bears his name, a slightly morbid thought struck me: his heart was here, but where exactly was the rest of him? And thus began a quest to follow Somers home and learn more about his life before and fate after Bermuda.

Is his heart in the right place?

Actually, as I sat by the monument in Somers Garden I knew I wasn’t really at the site where his heart was buried. That site, or rather the place where seventeenth-century Bermudians thought it was, was about 30 yards away—in a far less tranquil spot.

Sir George Somers died on November 8 or 9, 1610—sources differ on the exact date. We have two written accounts of his last days in Bermuda, but different agendas peek through each narrative. John Smith, the famous explorer and early colonial historian, presents Sir George as an unselfish friend to Virginia. He went to Bermuda to fetch “hogs and other good things” for languishing Jamestown because “his noble mind ever regarded a general good more than his own ends.” Despite his age (nearing 60), he made the “dangerous voyage” in the Patience and, upon arrival, exerted “extraordinary care, pains, and industry” to gather food. But alas, “the strength of his body” was not equal to the “ever memorable courage of his mind.” He died “in that very place which we now call Saint Georges town” after exhorting his sailors “with all expedition to return to Virginia” with food. (The unsubstantiated but oft-quoted assertion that he died “of a surfeit eating Pork” comes from Edward Howe, an English chronicler who was not involved with the voyage.) Somers’s men “embalmed the body” and then carried it on to “Whit-Church in Dorsetshire” for burial after leaving volunteers Christopher Carter, Edward Chard and Edward Waters behind in Bermuda so as “not to leave such a place abandoned.” Smith’s account does not berate Matthew Somers, Sir George’s nephew and heir, for sailing for England rather than Virginia and even credits him with promoting Bermuda as an ideal site to colonize.

Nathaniel Butler, by contrast, paints a less flattering portrait of Sir George in his lengthy history of early Bermuda. Like other sources, Butler noted that during the 1609–1610 sojourn of the Sea Venture castaways, Somers and Gates fell out with each other, but asserts that Somers formed a plan to keep Bermuda for himself. According to Butler, Somers directed Carter and Waters to remain “secretly behind” when the Patience and Deliverance departed in May 1610. He returned to Bermuda “under a pretense of fetching new relief” for Virginia but really to stake his claim to the island: “inflamed” by Bermuda’s promise, Somers “resolved upon [establishing] a plantation” there by the “purse and means of himself and his friends.” He died before he could execute his mercenary scheme, however. Butler implies that “Somers-seat” (Somerset) Island particularly struck Sir George’s fancy and was to be the site of his future estate. Butler and Smith agree that Somers died at St. George’s and that “his heart and bowels” were buried there, but Butler adds that a “great cross of wood” was erected above the grave site. Where Smith’s account has Somers’s body openly carried to England, Butler relates that the corpse was secretly stowed aboard the Patience in a cedar chest, because “superstitious mariners” would have refused to carry it. “The portage of dead bodies,” after all, was “prodigiously ominous.”

As Butler pulls Somers’s reputation down, he also builds his own up by relating how, soon after he arrived as governor in 1619, he found Somers’s cross neglected “in a by-place, all overgrown with bushes and rubbish.” Deciding “so noble a gentleman deserved”
better, Butler fashioned “a small monumental tomb” three feet high, using a handsome marble stone imported from England. Butler also composed an epitaph, which he had engraved on a brass plate set into the stone:

Whose well tried worth, that held him still employed

Gave him the knowledge of the world so wide

Hence ’twas by Heaven’s decree that to this place

He brought new guests and name to mutual grace.

At last his soul and body being to part

He here bequeathed his entrails and his heart.

Neither accurate nor elegant, Butler’s words and his tomb endured for at least two centuries.

We thus have dueling images of Somers: Smith’s selfless hero and Butler’s selfish schemer. One is left wondering which is true. A close reading of Butler’s history reveals that he treated many other early Bermudians poorly and was well versed in the art of character assassination. By the time Butler wrote his history in the early 1620s, Sir George had no defenders to rebut it. Without additional corroborating evidence, we should take both accounts with a Turks Island-sized grain of salt as we consider whether Sir George’s heart was in the right place in November 1610.

And then there’s his actual heart. The wooden cross and Butler’s monument were located at the intersection of present-day Duke of York and Duke of Kent Streets, the roads forking at the tomb. The tomb site was marked as late as the 1780s on the north side of York Street, to the south of the present-day Snow Plant Inn. While researching Bermuda’s Architectural Heritage: St. George’s, I discovered that the tomb fell victim to road widening. As military thoroughfares, both Kent and York Streets were doubled in width and widened again in 1876. As best as we can tell, the exact site of the now-lost tomb is in the middle of York Street, about 10 feet south of the sidewalk skirting Snow Plant Inn. It would seem that scores of cars, bikes and pedestrians unknowingly pass over the reputed burial site of Somers’s heart every day. Rest in peace, indeed!

Butler’s tomb was gone by the time Governor Lefroy went looking for it in the 1870s, but he did find another tomb nearby in the park now known as Somers Garden. That area was originally a town common of sorts: Daniel Tucker had dug a pond for watering livestock there in 1617. All St. Georgians probably had access to it. After the fall of the Bermuda Company in 1684, the Crown claimed all of the company’s public land, including this commons. Eighteenth-century governors enclosed it and renamed it the Governor’s Garden. (A now blocked-off avenue ran directly between the governor’s mansion—at the site of the Unfinished Church—and the garden’s northern entrance.)

Most governors used it to grow vegetables and play the occasional cricket match, but in 1726 Governor John Hope Bruce buried his wife, Charlotte, there, erecting a stone tomb along the garden’s southern wall. In 1831, surveyor Peter Burchall and later Governor Lefroy mistook Charlotte Bruce’s tomb for that of Somers. In 1876, he erected a monument to Somers with far more praiseworthy prose than Butler had bestowed. The whole park was renamed in Somers’s honour in 1909, and an even grander monument was built at the southern entrance to the peaceful, well-manicured formal garden we enjoy today.