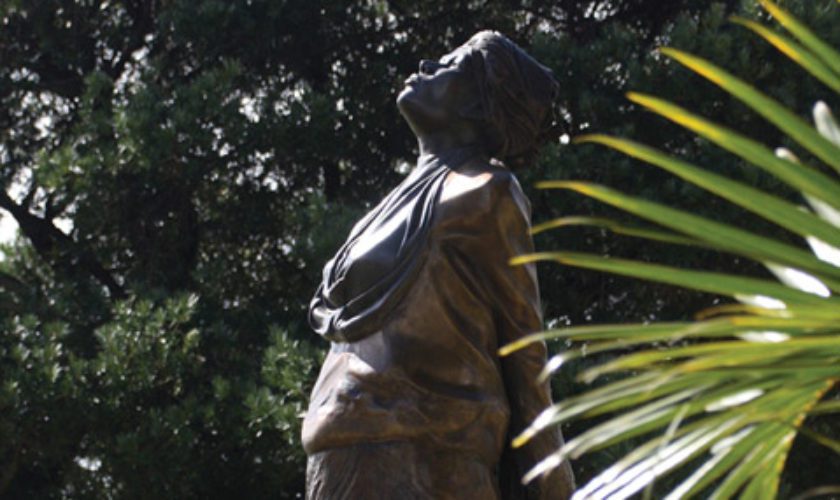 In June 1730, Sally Bassett, an elderly Bermudian slave, was burned at the stake. She had been convicted of the capital crime of attempting to poison her granddaughter Beck’s owners, Thomas and Sarah Foster, as well as their slave Nancey, the previous December. In the centuries since, Sally Bassett has never been forgotten. In his 1937 travel book Bermuda Journey, William Zuill mused, “It is curious, that while so many punishments have been forgotten, the burning of Sally Bassett should have made such a deep impression that it became a Bermuda legend.”

Her story has been remembered in a variety of ways, most recently in the Bassett statue sculpted by Carlos Downing, which was erected in the grounds of the Cabinet building and formally dedicated by the premier at a ceremony attended by the governor and other dignitaries in February 2009. The ten-foot-high statue is now part of Bermuda’s African Diaspora Heritage Trail.

Why and how has Sally Bassett so haunted the Bermudian psyche? In recent years, historians have become interested in what is called memory studies, that is to say, in how societies tell themselves stories, in what is remembered and what is forgotten and in the meaning of stories and legends embedded in a culture or within some group in the larger culture. In other words, how do societies construct their collective memory?

Often stories from the past are controversial, with different groups contesting their meaning in the present. One has only to think about the differences in public opinion in the American state of Georgia over the fact that the Confederate flag is incorporated into the design of the state flag, for example. For many Georgians, especially its black citizens, the flag is an offensive reminder of slaveholding days. For other Georgians, the image is redolent of the glory of the Old South. The result is a heated debate over the flag’s design.

What about the story of Sally Bassett and its meaning(s) within Bermuda’s social memory? Bermuda, like most former slaveholding societies, has found it difficult to grapple with the meaning and legacy of slavery ever since emancipation in 1834. Moreover, given Bermuda’s small size, evoking slavery often literally means “Your great-great-grandfather owned my great-great-grandfather” or vice versa—a claustrophobic and painful reality.

If one looks at what is known of Sally Bassett’s life and death, there seems little doubt that her story sums up both the cruelties of slavery and what it could drive some of those so brutally exploited to do in return. Sally Bassett was accused of “horrid villainy” and being “evil and wicked” at her trial by a “Jury of Life and Death” made up of 12 white men at the State House in St. George’s in June 1730. But there is no doubt that these phrases could be applied equally to the abuses of slavery.

As historian Clarence Maxwell points out, one probable motive for Sally Bassett to employ imported poisons like manicheel root and white toad against the Foster household (a method possibly derived from her knowledge of traditional West African-based medicinal and spiritual practices known in the Caribbean as obeah) was revenge for the punishments she had already suffered as a slave.

What do we know? In 1712, Sally Bassett, along with another slave called Indian Tom, was accused by Captain John Jennings and another landowner of threats, damage to property and killing livestock. Brought to trial, Bassett was sentenced to be whipped the length of Southampton Parish, a sentence that may well have involved more than 100 lashes. The scars and the memory of this harsh sentence evidently marked Bassett. Nearly two decades later, John Jennings’s daughter Sarah was one of her intended victims as she directed her granddaughter to put poison in the food at the Foster house as well as a noxious inhalant in the slats of the kitchen door. (Sarah Foster, in turn, left her Southampton sickbed to testify against Sally Bassett.)

Even in 1730, death by burning was an extreme and horrifying punishment. But Sally Bassett was an elderly slave, whose monetary and labour value as property was diminished, and, given the social climate of the day, her awful fate was meant to serve as a warning to all slaves. Fear of slave revolts (and a possible attack by the Spanish) was at a fever pitch at the time, particularly since Britain had just withdrawn its Independent Militia Company from the island. Moreover, Bermuda was in severe economic decline. Historian Virginia Bernhard tells us that between 1725 and 1730 as many as 2,000 people left Bermuda because of what Governor John Pitt called “the poverty of the place.”

In such a climate of fear and uncertainty, any act of slave against master, particularly the allegation of such an insidious murder attempt, would have been viewed harshly. (Savage punishment for such acts by slaves was meted out elsewhere. In New France, in 1734, Angelique, a Montreal slave woman, was tortured and hung, and her body was publicly burned for allegedly torching her mistress’s house and the surrounding neighbourhood). When Sally Bassett, who defended herself in court, stood to hear her sentence, she declared she never deserved it. Did she mean slavery as well as the verdict?

Innocent or guilty, Bassett was burned to death on a scorching June day before a large crowd of onlookers, harbourside at Crow Lane in Hamilton tradition asserts, although Clarence Maxwell points out that another possible site of execution was Gallows Island (now part of Ordnance Island) in St. George’s, near the site of her imprisonment and trial. That searing spectacle marked the end of her life, but in many ways, it was the beginning of her story and her many-faceted preservation in the social memory of Bermudian myth and legend. There is a story that she protested her innocence to the end, and out of her ashes sprang the small purple flower known as the Bermudiana. And in Bermuda, a scorching hot day is called “a real Sally Bassett day.”

What do the traditions linking Sally Bassett’s end to flowers and weather suggest? For one thing, they suggest that her fellow slaves, denied education and the means to write about or publicly memorialize Sally Bassett, a slave who actively resisted her subjugation, remembered her in another way—in oral traditions that tie her to the cycles of nature, thus providing poignant annual reminders of her fate in the link with flowers and weather. Another traditional story about Bassett, recounted by Cyril Packwood in Chained on the Rock, his book on Bermuda slavery, is that while travelling from St. George’s jail to be burned, she told the crowds hurrying to her execution, “No use you hurrying folks. There’ll be no fun till I get there!” Why would black Bermudians pass down such a story? Perhaps because such a vignette suggests that to the last, Bassett was outspoken, refusing the meekness and passivity expected of a slave and a condemned prisoner.

In a very different way, Sally Bassett was also conjured up for early-twentieth-century white tourists to the island, in an era when Bermuda was still very much a segregated society. One of the popular souvenirs produced by the Tucker sisters, whose Little Green Door tearoom was popular with tourists like Mark Twain, was a small tabletop brass dinner bell designed to call guests to dine or summon the maid from the kitchen to serve and remove courses. Called a Sally Bassett dinner bell, the souvenir featured the image of an old black woman whose skirt formed the body of the bell.

It seems bizarre to evoke the image of an accused poisoner in a dinner bell. However, the transformation certainly suggests that some white Bermudians also remembered Sally Bassett as an embodiment of the festering intimacy that domestic slavery produces. But they tried to deflect the sinister significance of the event by trivializing it, making a quaint object out of Sally Bassett to deny dark realities of enslavement, hatred and revenge. The dinner bell symbolically puts her back to work, ready to do her owner’s bidding.

Some mid-twentieth-century writers tried to sidestep the horror of Sally Bassett’s story altogether by suppressing it to make the history of the colony seem rosier. Terry Tucker’s often-reprinted history of the island, Bermuda’s Story, omits any mention at all of Bassett’s trial and execution. Whether through mythmaking or by leaving her out of the record, Sally Bassett’s story clearly haunted both whites and blacks in the slave and segregation eras, albeit in different ways, accentuated by some, avoided by others.

Today Sally Bassett’s memory can function in very different, potentially more positive ways as Bermudians continue to contend with the legacy of slavery nearly two centuries after its abolition. Writer Kim Dismont Robinson, Bermuda’s folklore officer, has written Trial by Fire, a play about Sally Bassett first staged as part of the 2006 Emancipation Week celebrations. Dismont Robinson has said that she was interested in the human drama of Sally Bassett’s story, depicting for Bermudians what a female slave could be driven to do in a world of bondage where even her own children did not belong to her.

Carlos Dowling’s sculpture of Sally Bassett, which we see today in Hamilton, embodies another facet of how her memory has been constructed for Bermudians. According to Dowling, the statue is designed to “show her transcending between life and death” to function as a “piece that could inspire both major groups of our community.” For Dowling, the sculpture is a reminder of Bermuda’s past, a representation of “a place from which we came” and a reminder “to never … go back there.”

Other Bermudians have articulated related views. Artist Charles Zuill, in a Royal Gazette story about the statue, described it as “an important addition to our public sculpture, not only as a way of reminding us of our propensity to inhumanity, but also as a depiction of someone who has become a legendary Bermudian character.” Clearly, the changing ways that the Sally Bassett story has been remembered—constructed—over time remind us just how complex and long lasting the effects of slavery are.

There is something else to remember. Sally Bassett is one of the few slaves whose life story we know in at least some detail, largely (and ironically) because of the survival of trial records, now found in the Bermuda Archives. Why? Most slaves were denied education and thus the power to record their own stories. Another Bermudian slave, Mary Prince, managed in 1831 to dictate her own account of slavery in Bermuda, in the salt ponds of Turk’s Island and in Antigua. The History of Mary Prince is a tale of hard labour, beatings and suffering—but also of courage, endurance and a quenchless desire for freedom. In 2008, Conchita Ming choreographed a dance entitled A Woman Named Prince, performed during Emancipation Day celebrations. Can memories of two Bermudian slave women, two of the very few slaves whose lives we actually know something about, serve to further reconciliation and renewal in twenty-first-century Bermuda? Only time can tell.

From The Bermudian, Spring 2010