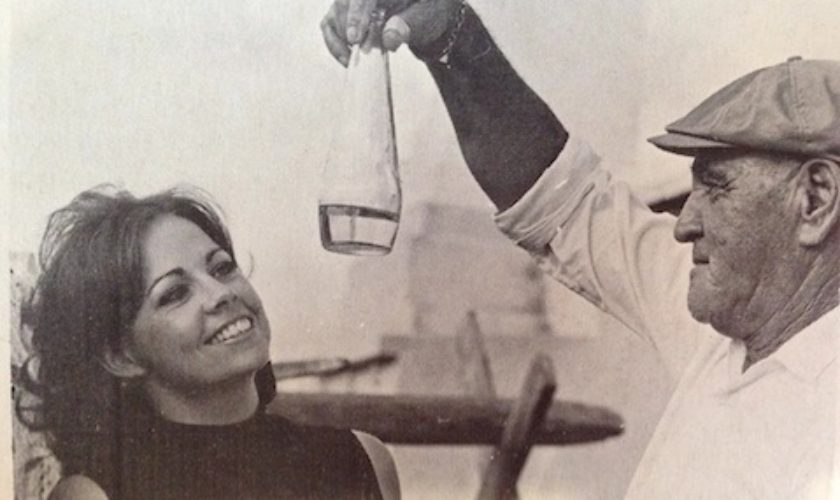 This article was taken from our archives. It first appeared in the October 1973 issue of The Bermudian. It appears here exactly as it did originally.

Gilbert Lamb doesn’t play the ponies or the English football pools, but he has been known to wager on the weather and wins. His winnings are never great. Lamb is a Bermudian and not the kind of man to take advantage of people. He is content with a case of beer or, when he has got a really sure thing, a quart of vanilla ice cream.

But to hear Lamb talk, his hands and face as lined and hardened as the rugged coast of his St. David’s Island home, his are always sure bets. After all, why take a chance on a quart of vanilla?

For nearly 60 of his 70 years, Gilbert Lamb, like many Bermudians, has relied on a peculiarly unscientific instrument, known as the “shark oil barometer” for his weather forecasts. It is a simple device, which behaves in complex ways to give those experienced in its use a two or three day preview of the weather.

“I don’t even look at it much on a day like this,” Lamb says, gesturing toward a blue sky dotted with puffy which cumulus clouds. “About the only time I watch it closely is from the 15th of August to the 15th of October – that’s the hurricane season.”

The liquid in Lamb’s barometer is the oil gently extracted from the liver of a young shark – a puppy shark as it’s called here. Sealed in a bottle, preferably a bulbous-bottomed wine bottle, the oil behaves in ways, which do seem to herald changes in the atmosphere. On Bermuda’s numerous clear, calm days, the oil is as transparent as water, with a thin layer of sediment lining the bottom. If the winds increase from one direction, the sediment banks itself on that side of the bottle. Foul weather is forecast by the oil taking on a cloudy appearance as the sediment is stirred up. The experts can be even more specific in their forecasts by examining peaks and valleys in the sediment or crystals forming in the neck of the bottle.

“Of course, the first sign of your hurricane is the ocean swell,” Lamb admits, “but later, the scum in the shark oil makes up like a mushroom.”

The strength of Lamb’s shark oil forecasts once won him a case of beer from a young pilot stationed at the U.S. Naval Air Station here.

“The base commander brought this young flyer to see me,” Lamb says with a faraway grin. “He said the lieutenant and his crew had just flown through a hurricane which would hit Bermuda in the morning of the following day. I laughed in their faces. I looked up my shark oil right there in front of them and said, ‘If we have a hurricane within the next 48 hours, I’ll drink that shark oil.’”

Lamb’s shark oil stayed in the bottle, visitors in Bermuda continued to frolic on the beaches under clear skies, and an incredulous naval lieutenant brought Lamb the case of beer he owed him.

“I’m not sayin’ those navy aviators didn’t fly through a hurricane,” Lamb declared. “It’s just that I knew and the shark oil knew that hurricane wasn’t coming’ here. If you study the oil right up, you can even tell when it’s going to thunder and lightening. I’ve won ice cream from a woman in Flatts by predicting correctly when it would rain and end a drought.”

There is little data on why shark oil performs the way it does, but the phenomenon has been observed in Bermuda for years. Lamb learned to read the oil by listening to his father and grandfather, both firm believers in the oil’s meteorological properties. And, although not all shark oil behaves the same – depending, most say, on how fresh the oil is and “during which phase of the moon it was caught” – observation of one particular specimen and how it behaves under a given set of circumstances is the key to successful forecasting.

Bermuda shark oil is periodically given a suspicious glance by the professionals. Cmdr. E.G. Smith, officer in charge of the Naval Weather Service Environmental Detachment at the U.S. Naval Air Station here, kept a bottle of the shark oil around the forecasting centre for a while. “There’s no doubt about it, the shark oil does change,” says Cmdr. Smith, “and I have no idea why. But if the shark oil works for some people and they can make accurate forecasts with it that’s fine.”

A friendly rivalry has existed for years between the Colony’s shark oil users and the U.S. Naval weather personnel. “We get very accurate ‘hindcasts’ from people calling up and telling us their shark oil said the weather would do what it did,” Cmdr. Smith said, “Of course, they never call and tell us when we’re right.” The method, Cmdr. Smith says may have value. “Certain folk methods of predicting weather do have some merit,” the naval forecaster says, “such as ‘red sky at morning, sailor take warming’ or judging the severity of an approaching winter by the feathers on a ptarmigan’s feet. Perhaps the shark oil is in that category.”

Gilbert Lamb also admits he has no idea what makes his shark oil “act up”; he only knows it works for him. “I’ve never in my life had the shark oil barometer fail me, and as a fisherman for 55 years I relied on it,” Lamb says staunchly, “Whatever the oil forecasts, that what the weather comes out to be.”

Regardless of the advances in modern weather forecasting, a quart of raspberry ripple says that Gilbert Lamb won’t very often get caught out in the bright sun without a wide-brimmed hat or in the rain without his foul weather gear.