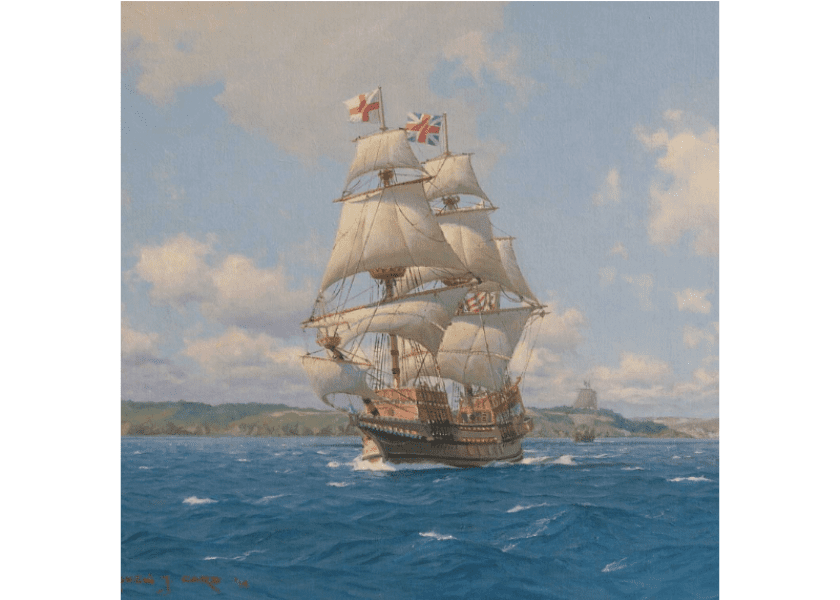 This article was taken from our archives. It first appeared in the November 1942 issue of The Bermudian. It appears here exactly as it did originally.

One of our most able historians, Sir Stanley Spurling, whether in a printed article or delivered address always creates much interest and attention. His love for his own country has led him to delve deeply into her history, and the community is the richer for his researches. Perhaps the following article was inspired by the recent launching of a war vessel here – the first for a century – but we feel that whatever the reason, our readers will deeply appreciate the valuable information contained therein.

It is probable that the Spaniards, who certainly knew of Bermuda since 1511, built some vessels to carry ship-wrecked Spaniards away from the Islands, as there were two or three Spanish wrecks found here in 1593 by the Englishmen, Henry May, who was wrecked in a French ship on the northwest reefs in that year. Before the ship went to pieces, they saved the captain’s tools, nails, sails and tackles and then went to work and built a barque of 80 tons, caulked it with lime mixed with tortoise oil instead of pitch. They sailed away to Cape Breton. This is therefore the first recorded bit of ship-building in Bermuda.

In 1609 Sir George Somers with a party of settlers on the way to Virginia, landed from their ship-wrecked vessel “Sea Venture” at St. Catherine’s Bay, St. George’s. Sir Thomas Gates, the Governor of Virginia, pitched his camp with his settlers at the extreme end of St. George’s Island, where his name still exists in “Gates Fort,” “Gates Bay” and “Gates Camp.” In Buildings Bay, the little bay next to Alexandra Battery, Sir Thomas Gates built the “Deliverance”, a vessel of 80 tons, while Sir George Somers, with his sailors had moved into the Main (land), built a sloop called “Patience” of 30 tons. It is recorded that they only had one iron bolt and that all the rest of the vessels were made of “trunnels” or wooden plugs with small wedges driven in each end. As in the case of the French vessel, she was caulked with lime and turtle oil.

The first vessel actually built in these islands after they were definitely settled by the Virginia Company, was a small vessel which five settlers persuaded Governor Moore to allow them to build for him, so that he could go fishing in all weathers. But when it was built, they provisioned it and set sail for England, and after great hardships actually arrived in Ireland where the Earl of Tomund honourably entertained them and caused their small craft to be preserved for a monument as she had sailed more than 3,300 miles without any sight of land.

Ship building seems to have become a very active pursuit in Bermuda. All our historians point to the vast amount of trading done by Bermudians in their ships on the North Atlantic. Not all ships used by Bermudians were built in the islands, as sailing under Letters of Marque as privateers, they preyed upon the commerce of their country’s enemies, and many of the ships sailing from Bermuda were acquired in that way.

One of the earliest bits of ship building I can find recorded was the good ship “Rose” of 40 tons, fitted with six guns and with which its owner, Captain Lewis Middleton recaptured Turk’s Island from the Spaniards in 1710. Adding two more guns he soon captured a French ship and in 1711 was recommissioned against the pirates in the West Indies and was fortunate enough to secure a prize from them. He built a second ship called the “Content” of 36 tons with six guns which he set sail again with Letters of Marque against the ships of the greatest maritime nation of his time – Spain.

In 1724, Nicholas Trott set sail in a ship of his own construction, but which was registered at St. Eustacia. He was captured by Francis Briggs, the pirate, who broke the legs of all the crew, but Captain Trott brought his ship safely back to port in Bermuda with all his men crippled as above.

In 1739 the Hon. Samuel Spofferth, a Member of Council, sailed with Letters of Marque looking for ships of the King’s enemies. He was in a little sloop, named the “Popple” after the then Governor and captured a rich Spanish ship near Curacoa with a valuable cargo of merchandise of various sorts and “eight Thousand gold pieces of Eight.” She was only 70 tons burthen, and eight guns and a crew of twelve men, among them being John Tatem.

In 1742 Captain William Wilkinson was in command of a Bermuda built vessel, whose name I cannot ascertain, but he sailed right into the mouth of the Rio de la Hache, and captured two illicit traders selling ammunition to the Spaniards. In 1744 he captured six more vessels in the Lesser Antilles and in 1746 he was again at sea in another Bermuda vessel, the “DIANA” and captured two French privateers.

In 1747 we have an authentic account of Captain Grantham of Bermuda, serving his King as a Naval Scout and Despatch carrier, but the name of his vessel is not mentioned. His vessel was a large brigantine of 16 guns, built and manned in Bermuda and was employed in the Royal Navy as a Coast Guard vessel off Barbados. Unfortunately he was captured by two French frigates late in 1747.

In 1778 Briger Goodrich, a United Empire Loyalist from New Jersey, received Letters of Marque to cruise against the King’s Enemies and built the good barque “Hammond” of 100 tons burden with eight guns and with eight god men and true. He was most successful and in that one winter of 1778 brought in thirty-six prizes form the Rebel Colonies.

It has been impossible to locate where the ships I have mentioned were built, but on the 22nd of February 1817, the “Three Brothers” a fine staunch well-built sloop, was launched from the Shipyard of Solomon Joell in Hamilton, and in March another vessel named the “Kate” a substantial brigantine was launched form the Shipyard of Mr. Nathaniel Tynes at the North Shore, Brackish Pond. She was 144 tons and was built for the firm of William J. Sears & Co. In that year the local press stated that the tonnage of shipping owned in Bermuda amounted to nearly two tons for every white inhabitant in the Colony, man, woman and child. In September of the same year, a beautiful brig of 207 tons was launched from the Shipyard of Richard G. Dill for the firm Richard Wood & Co. She was named the “Southampton” because most of her timber came from that parish.

In 1818 the Bermuda brig, the “Adelaide” belonging to Capt. John Wainwright was boarded by an officer and six armed men from a schooner under the English flag but once on board they displayed the Mexican flag. They plundered the vessel, taking everything of value even stripping them of all their clothes and shoes.

On the 10th of March 1826, Mr. Sam Wood’s schooner of 150 tons, was christened and launched as the “Lady Burnaby.” The record says, “She went off in very fine style and is allowed to be one of the handsomest vessels every built in Bermuda.”

In April 1830, His Excellency the Governor, attended the launching of a barque christened the “Lady Turner”. She was built by Mr. Samuel Trott at the Shipyard in Wellington, St. George’s for Mr. John J. Tucker of St. George’s.

In 1863 there is a record of the launching from the building yard of Mr. C. Seon of a staunch and fine looking vessel of 110 tons named the “Otter”. “She went off in grand style with nearly 100 persons on her deck when she was launched amidst the cheers and hearty good wishes of a very large assembly of people.” She was owned by Richard J. and Thomas M. Dill.

In the year 1836 shipbuilding was carried on to a great extent, particularly in Port Royal where there were four blacksmiths’ shops connected with the shipyards.

The decrease in the shipping of Bermuda was mentioned din a speech in the House of Assembly in 1836 when it was said that whereas there were 213 vessels registered in Port Royal in 1789, in 1836 it had now been reduced to 40.

A contemporary account of the Colony was published by Silvester Doig, Edinboro 1792. It was written by Abbe Raynal and in it appears this paragraph: “For upwards of a century past they have built ships at the Bermuda’s, that are not to be equaled for swiftness and durability, and are in great request, especially for privateers. They are made of a kind of cedar, called by the French “acajon.” They have endeavored to imitate them at Jamaica and the Bahamas, but their ships are far inferior to their models.”

It is with a thrill of pride that Bermudians have seen the launching of craft built for the service of their country here recently. It is true the materials are not Bermudian, nor are the designs but the craftsmen are.

One can see the old “ways” cut in the rocks in many places along the north shore where the old ship building yards existed. One is plainly visible on the eastern side of Flatts Inlet, others a little further along the shore at Shelly Bay, where the chimney of the old Forge and Blacksmith’s shop still stand. Again, at Bailey’s Bay, opposite “Virginia Manor” can be seen the old “Slipways” of the Higgs Ship Yard, but it is quite evident that ship building was practiced in every part of the Island.

The Bermuda Privateers have been accused, as a class, of the crimes of the worst of their number, and were wrongly called “pirates” by jealous contemporaries, and by later generations of a more refined period. Admiral Sir Charles Kennedy-Purvis, in a recent speech at the Over-Seas League, explained how that the ships of the Royal Navy were in those early days only armed merchant ships, or, in other words, “privateers”, that is, merchant vessels, armed and sailing under Letters of Marque. As he pointed out, there was no regular Royal Navy in those days, and the privateers were the ships who fought the battles of their nations. Bermuda’s part in these wars of our Mother Country forms a highly creditable chapter in the history of the Somers Islands. It has to be the British Flag and the fear of British arms to all of Britain’s enemies on the sea.