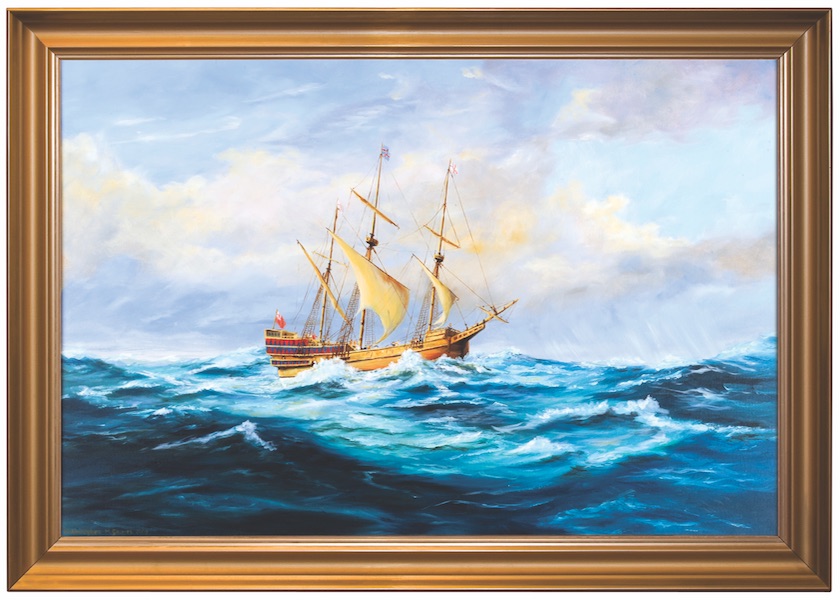 You might think you know the story of the Sea Venture – but recent research reveals a new angle on the famous wreck that discovered bountiful Bermuda. Maybe the Sea Venture was less of a wreck – and more of a controlled scuttle, to get the passengers as close to the island as possible in their storm-damaged boat.

History
The Sea Venture was designed as the flagship vessel to transport provisions and settlers to the New World. The ship was built by the London Company, who had just set up the settlement of Jamestown in 1607.

At this time, the British were interested in expanding their empire abroad, but the colonies they set up in what is now the United States would later secede from Britain. The Sea Venture was purpose built to carry people, with a hold furnished for passengers. It was wooden hulled, and the ship was armed.

Wreck
The Sea Venture set sail from Plymouth in 1609 with a fleet of six other ships, and headed for Jamestown. All together, the fleet transported about 600 crew and settlers, and the Sea Venture alone carried 150 people.

It became separated from the rest of the fleet as it hit hurricane force winds and churning seas. The ship had just been built earlier that year, and it was thought that the storm washed away the unset caulking between the ship’s timbers, and so it started taking on water.

The Sea Venture wrecked much closer to shore than any other Bermudian wreck – only about half a mile away from Fort St. Catharine’s Beach. Historians think that Sir George Somers deliberately wrecked the ship close to shore, on a softer reef.

Contrary to popular belief, crew on the ship would have known of an island we now know as Bermuda – and perhaps spent time learning about how to navigate its reefs, in case they had to stop there. As a result, all 150 passengers made it to shore without any loss of life.

What Happened After The Wreck?
The settlers spent nine months in Bermuda, collecting more provisions and building two new ships – Deliverance and Patience. They knew that the colony in Jamestown was starving, so they knew that they had to act as quickly as possible. The ships were built from the savaged remains of Sea Venture, and hardy Bermuda cedar. Bermuda cedar is incidentally very resistant to rotting in the ocean, and it would go on to form the base of a lucrative ship building trade in Bermuda in the 1700s.

However, not all the colonists were eager to leave. From records at the time, it seems that two camps of colonists split – one led by Sir George Somers and the other by Sir Thomas Gates. Various mutinies took place in both camps as men resisted the push to continue to Jamestown – they were quite happy in warm, fruitful Bermuda, and feared what they had heard of the harsh life in the colonies. Furthermore, most people who wanted to leave Britain for the new world were, “shall we say, known to the authorities of England,” as Gavin Shorto puts it in his Untold Story of The Sea Venture article for a 2009 issue of The Bermudian.

The Voyage to Virginia
Eventually, the colonists collected cahows and turtles from Bermuda to take to the New World settlement. There are records of cahow bones, Bermuda’s endemic bird, at Jamestown in the U.S, undoubtedly brought there as a food item.

When they arrived, they found that the settlers at Jamestown wanted more than anything to go back to England. They had been starving for many months, and had lost many of their company. As they were sailing away, though, they met another ship bringing settlers and provisions to Jamestown!

They were forced to turn around and attempt settlement again, but morale was low. During this time, Sir George Somers was eager to get away from the starving colony and his nemesis Sir Thomas Gates, and suggested a trip to Bermuda to get more provisions. A ship was sent to accompany him, but he lost it in a fog – perhaps on purpose, and went on to Bermuda alone.

A few of the Sea Venture’s original crew decided to stay in Bermuda instead of going to the New World. The two men lived for a time on Smith’s Island near St. George, and Sir George Somers met them when he returned.

In 1612, the Virginia Company decided to settle Bermuda officially, and 60 settlers were sent on the Plough under the command of the first governor, Richard Moore.

How Did We Find The Sea Venture?
Apparently the wreck’s location was well known in the early days of the colony. The ship sat above the water for some time, and after it was tripped of useful parts sank to the sea. In 1612, two guns from the Sea Venture were brought to shore and used in one of Bermuda’s first fortifications. However, the wreck eventually slipped back in to a sand hole and the location was lost over time.

For many years, shipwreck enthusiasts had been interested in an area called Sea Venture Flats – if it bore the name, why couldn’t they find the ship there? Eventually, Edmund Downing located the wreck site in 1958, wedged into a reef.

A clay pipe, a vase, and a curious stone jug were recovered from the wreck and eventually identified as being from the correct period to secure the wreck’s status as the Sea Venture.

A cannon recovered in 1959 though, threw historians off. It seemed like it was from a much more recent era, but after the discovery of the unique pottery, historians believe it was misidentified.

Various archaeological experts have worked on the site, and in 1982 it was confirmed that the wreck was old enough to be the Sea Venture. Archaeologists even spotted evidence of the ship’s hull being stripped for timber – as it would have been to build the Deliverance.