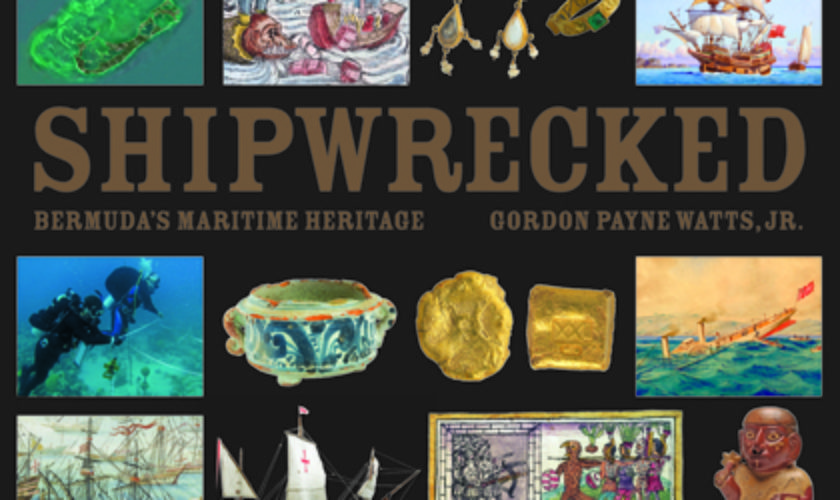 Three hundred wrecks unravel 500 years of history in a new book published by the National Museum of Bermuda. Shipwrecked: Bermuda’s Maritime Heritage embraces the island’s role as the so-called “shipwreck capital of the mid-Atlantic” and describes “the intimate partnership” Bermuda has enjoyed with the sea during the course of human history here. The island has depended on the ocean for resources, commerce and defence—but the trade-off has been lost lives and scores of vessels claimed by the island’s necklace of barrier reefs.

Some of the victims have been trading vessels, Portuguese and Spanish treasure ships whose cargoes of gold have titillated museum-goers ever since. Others are sloops-of-war and ships of the line. Although most were ensnared before the advent of GPS and modern navigational instruments, ships did fall victim to Bermuda’s dangerous waters even in the late 1900s. But it was the discovery of the Sea Venture in 1958 that caught the attention of underwater archaeologists worldwide—launching a vibrant period of wreck discovery and investigation.

American archaeologist Dr. Gordon Watts has a long track record investigating shipwrecks, and is an esteemed scholar in the field. Having studied wrecks in Jamaica, Panama, Mexico, France, Dominican Republic and the United States, Watts visited Bermuda in 1982 to examine the island’s most historic wreck, the Sea Venture. With the National Museum’s director, Dr. Edward Harris, he launched a long-running cooperative programme to investigate Bermuda wrecks, starting in 1984 with the Confederate blockade-runner Mary Celestia.

Watts describes Bermuda as “the most incredible classroom in the world,” and Shipwrecked backs up that claim with illustrative chapters that lay out the history behind each downed vessel and the archaeological and research efforts to unearth both artifacts and the backstory of each. Like a good detective, Watts spells it out, detailing ships’ cargoes—of gold and, equally interesting, courtesans’ personal possessions, such as earrings and combs—that were aboard the Spanish San Antonio, for example, when it went down in the late 1500s.

Such discoveries, both priceless and personal, are showcased in a volume that pays tribute to Bermuda’s underwater history. It also honours individuals such as Dr. Harris, divers Edmund Downing and Teddy Tucker, and many more, whose resolute passion for their work has paid dividends for museum visitors and history books like this one.