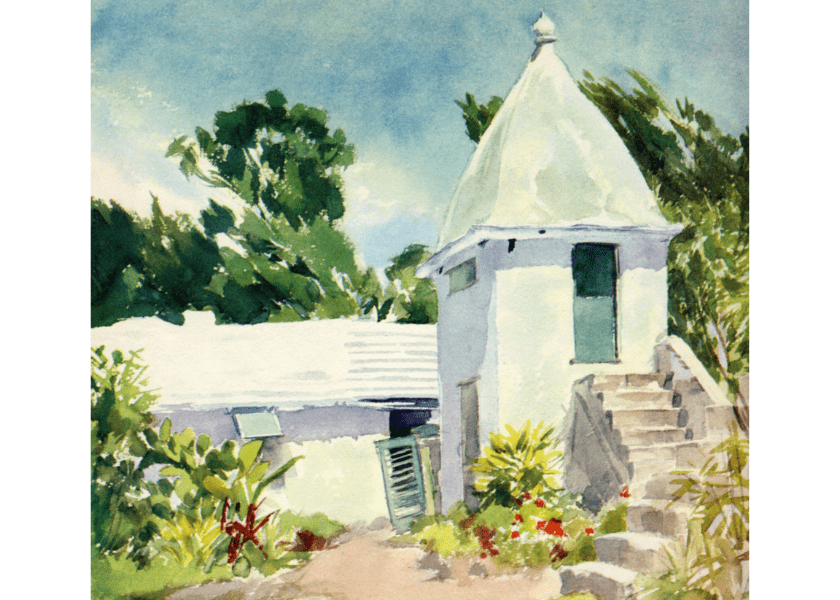 Famous for its distinctive arch leading to the buttery and to an inner courtyard around which the property is framed, Springfield on Somerset Road has to be one of the most photographed properties in the whole of Bermuda, let alone Sandys Parish. So it’s not surprising it has been featured several times in The Bermudian magazine over the last 80 years. In the December 1932 issue, Philip Knox, writing about early “colonial” architecture said that “there is in those high peaked butteries, broad chimneys and unpredictable roof lines something whimsical and elfin, a sort of fairy-tale quality.” He was convinced that the Springfield buttery could “harbour one of the wee folk.”

“The impossible pitch of that smooth stone roof,” he wrote, “would be exactly to taste, though the occupant would probably be just as puzzled as I was to know whence the power came that made the stone stay on.” He went on to describe “the low eaves, low doors, nooks, crannies and cavernous fireplaces,” as “all seemingly expressing a certain drollness of taste.”

In the July 1957 issue of The Bermudian, Betty Smith also wrote about Springfield but this time in connection with the opening of the Somerset branch of the Bermuda Library in the front section of the main house. “In recent times,” she wrote, “Springfield, the dean of old houses had ‘let herself go.’ She had become untidy—almost slatternly. Like Eliza Doolittle in George Bernard Shaw’s play Pygmalion, you could tell that basically Springfield was beautiful but woefully unkempt.”

At the time, the property was leased by the Bermuda Monuments Trust (precursor to the Bermuda National Trust) from the Gilbert family who had owned it ever since the late 1600s. The Trust hired Bermudian architect Wil Onions, renowned for his passion for traditional Bermudian architecture, to renovate it. According to Smith, in response to initial fears that Springfield “was doomed to be modernised and ruined in the process,” Onions declared, “The building looks more like the original building now than before we started work on it.” The grounds, suffering from the “tattered garments of unpruned trees,” were “tamed” by the Sandys Arbour Society.

American humorist James Thurber, frequent guest of The Bermudian’s editor Ronnie Williams at Felicity Hall in Somerset, apparently attended the opening of the library. He kindly donated an advance copy of his latest book, The Wonderful O, a short book of fairy tales for children. Books originally from the Gilbert family’s personal library were, according to Smith, also available on the shelves—“the old Gilbert family Bible,” a “fat volume called ‘The Practical Home Physician,’” and a “fashion publication called ‘The Young Woman,’ published in 1894, a delightful thing with illustrations of shy young misses.”

Springfield remained the home of the Somerset Library for many years but it also hosted the annual Sandys Flower Show, which was especially popular for its floral hat contest. In 1969 The Bermudian printed photos of several contestants, including “Little Canda Smith of Somerset wearing [a] hat made of bay grape leaves and calla lilies” and Miss Hylar Bean of Somerset who wore a “headpiece of daisies, calendulas and bird of paradise.”

Today, Springfield still retains its historic significance as well as the quaintness Knox enjoyed all those years ago—the Bermuda stone and the variety of shapes that make up the exterior: the little arches, the huge chimney, the adjacent angles of some of the walls. Its buildings reflect the island’s way of life throughout the centuries. The slave house, for example, accommodating at one point in the early nineteenth century 19 slaves, including a stonemason, a ship’s carpenter, two labourers, seven house servants and three children, allows us to imagine what it must have been like for so many people to have lived in such tiny rooms. At one point the Gilberts kept in the grounds one horse, one ram, two ewes, four lambs, one sow and three pigs.

But these days, Springfield is once again desperately in need of some loving attention since it has suffered from poor maintenance and fallen into disrepair. And once again, Bermuda has reason to be grateful for the Bermuda National Trust which has come to the rescue. Says Dorcas Roberts, director of preservation, “Our buildings team is currently working hard to preserve the buildings by providing them the urgent care and attention they need—the roofs and exterior walls have been repaired and painted and the exterior millwork is now being refinished. “

The verandah of the main building, added in the nineteenth century by Susannah Gilbert is, says Roberts, “in a very poor state of repair and is currently unsafe. We have submitted a planning application to make urgent structural repairs to make it secure and halt its deterioration but we also want to remove unsympathetic and deteriorating modern additions and replace missing structural and decorative features.” In addition, the Trust will fix the partially collapsed roof of the two-storey cottage on the property. The Trust is also applying for permission to alter the modern exterior steps on the building to uncover part of the original stone steps and install safety banisters.

The grounds, gracing a terraced garden leading down to a grove of palms and palmetto, need care and attention as well. Any changes will be carried out with the guidance of the Trust’s Gardens and Nature Reserve Committee. It is to be hoped the fruit-bearing olive and mulberry trees on the property will live longer yet, not to mention the cedar that resembles the Leaning Tower of Pisa.

Just as it was in 1957, the aim is to bring Springfield back to active life. For that reason, the Trust has applied for permission to change the use of the main house from institutional to commercial. “We would like to retain a public component to Springfield, as one of Somerset’s most important cultural and architectural treasures,” says Roberts. “Whilst no plans have been secured for this building as yet, it is the Trust’s intention to look for a partner/tenant that can operate a shop, tearoom and/or a visitor experience that will provide this building with a sustainable future that can be enjoyed by locals and visitors alike.” Anyone interested in leasing the main house for a small business is welcome to contact the Trust for further information.

The Trust will also rent out three apartments—one 2-bedroom and two 1-bedroom apartments—for private use. The total cost of repairs is budgeted at $400,000. Currently, the National Trust needs $210,000 to reach its goal. Anyone wishing to rent, or to donate, is invited to call Roberts at 236-6483, ext. 216. And volunteers are always welcome. “We need people to help—to repair the porch and bring the property up to an acceptable standard.”