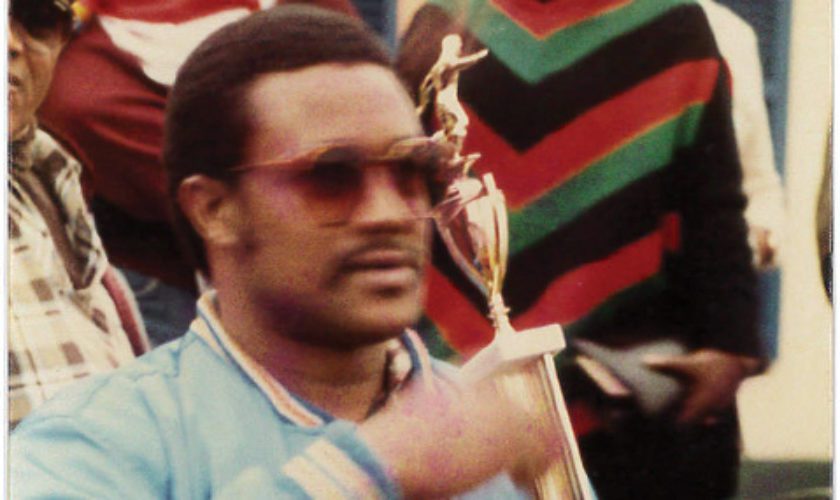 Where I Grew Up: Kenneth Bascome, St. George’s Parish

You could say that Kenneth Bascome came into the world with a bang, not a whimper. Born at home on Wellington Hill, St. George’s, in August 1948, he fell on the floor at the age of two hours and hit his head. “That’s why,” he says, “I’m half crazy! I struck my head when I was a youngster.”

However, apart from this unfortunate start, he enjoyed a happy childhood living in the house with his grandparents, Leonard and Muriel Bascome, and his mother, Ada. He was the second child in a family of six children; his siblings were Lynette, Earl, Melody, Eugene and Candy.

He also made long-lasting friends. “It was a strong neighbourhood. There was the Ming family. Dr. Fred Ming—now he’s in charge of conservation. And sister Darlene, the announcer. Johnny has his own bakery. Sister Sharon was a nurse, and sister Laverne an educator. Then there was Randolph Trott—he’s a banker. We even had an airplane pilot, Johnny Swainson, who passed some years ago. And there was Kenny Pearman. I was close to Anthony Burgess and Copeland Tucker. We were like three peas in a pod. We all played together.”

It was a safe neighbourhood as well. “We never even locked our houses then. Someone might holler, ‘Cathy, you can have some spread. Go and get it and just replace it.’ People would borrow, some sugar, a few potatoes, some onions. Everyone knew basically everyone in the neighbourhood.” There were police officers, Dudley Swan and Gladwin Hall, who lived in St. George’s and who were always out and about. “You had the relationship with them because you saw them and you respected them.”

Outside the slip gate was the neighbourhood grocery store, owned by Stephen Dowling. “There was also Winey’s variety store, which was owned by Mrs. Wilson. She was known for her pies—chicken, beef and fruit pies.”

Playing outside was easy, since there was lots of open space. “It wasn’t farming land. It was people’s private property, and we basically used to have permission to clear it off and have a playing field for cricket, football, go carts. You can’t do that today. It’s one of the reasons in my opinion that has caused the demise of the family, the loss of the open space where children could just go and let off steam.”

He recalls there were always “people looking out for you. They knew who you were.” Mothers, he explains, tended to stay at home to look after their children. Although in his case his mother worked. “My mother and my aunt Viola used to have a beauty salon. My mother was a hairdresser and my aunt a seamstress.

“We created our own activities. We didn’t have all those games children have today. We played simple little games we were happy with. We’d build tree houses and we’d catch lizards with grass. I never had a slingshot, though; I never liked slingshots. We’d play with spinning tops and the girls played jacks. We’d play spin the bottle so you could kiss your nice girlfriend! There was marbles—alleys—and hula-hoops. And we’d play golf. In those days we could go on the golf course, but then they became so strict you couldn’t even go on it.”

In the summer, of course, swimming was a favourite activity, but as was typical of the time, there were no formal swimming lessons. “I started to swim when I was 3 years old. I was living with my grandparents, and my grandfather used to come out every day and say to me, ‘We ask you not to go on that dock [at the end of the Wellington peninsula] because we can’t watch you.’ And then one day he threw me over. And it was either sink or swim. He was there to make sure he could help. But I learned at an early age your natural buoyancy will cause you to float. People who drown, it’s because they panic.”

Later he swam with his friends off the rocks on the North Shore where a slaughterhouse used to be.

While he spent many a happy hour in his own neighbourhood on Wellington Hill, he was also free to roam the town of St. George’s, and that freedom gave him a love of history. “I’ve always loved old-fashioned things. The forts fascinated me. I used to run round around St. Catharine’s Fort and Alexander’s Fort day in, day out.” He could also run around Ferry Reach and also on the cricket grounds. “We had more freedom than the children of today. Back in the days when there was concrete wicket, we could play on the cricket grounds. But when the clubs all got turf, children weren’t allowed. You know I was telling my mama about 15 years ago, when children started to play in the street, ‘When you were coming up, there were 122 lots of land. When I was coming, there were 84 lots of land. Now that the children are coming up, there’s no land.’ So now they’re playing on the street. There’s an attitude because people don’t know who they are.”

His first school was East End Primary, which he attended from ages 5 to 7, and which was then in St. George’s itself. It was known as the “small school.” Next he went to the “top school,” which was at the barracks in St. George’s. The main challenge was taking the 11+ test, the examination that determined which high school a student would attend.

“I can remember that as clear as all get out because of my teacher, Mrs. Eunice Simmons. I retained, but I didn’t put in a lot of study. She used to say, ‘When everyone else passes and you fail, don’t blame anyone else but yourself.’ I was successful and was accepted into Howard Academy. Out of 25 students, I came second. So she had to put me on the stage and say, ‘The young man is somewhat unorthodox, but he always seems to get things done.’ Even in my life today, she’d tell me the same thing!”

No doubt she was pleased that he was a child who loved to read. “I loved fiction, adventure stories like Huckleberry Finn. I was always reading.” At Howard Academy (in Devonshire on Roberts Avenue), he had teachers Edward DeJean, now deceased, and Donald Dane, with whom he is still friendly. His last years of high school were spent back in the old town at St. George’s Secondary.

Sunday school was also an important part of his life. “As a youngster I went to Sunday school every week. You got to see your friends at the other end of town that you only saw in school. I remember our Sunday-school teacher, Mr. David Brangman. He was in the Salvation Army, and he gave us pennies for our birthdays. If you were 9, he’d give you nine pennies for your birthday, one for good luck and one for bad luck. Everyone wanted to be in his group! We used to have a Sunday-school picnic every year up at Somerset Long Bay. I used to get sick on a bus, so I pedalled there. It took me about an hour.”

Other annual events included Cup Match. A St. George’s supporter, he never missed a game until he was 40. But he didn’t play in the game. “I was too afraid of the ball to play in it, but I was always willing to be a part of the training. I’d run around and field the players—Lloyd James was one—and I was honoured to be part of the preparations.”

Living in St. George’s as a child definitely instilled his love for the town and a desire from an early age for a role in public life. Despite the changes that building has made to the neighbourhoods, he’s sure of one thing: “I wouldn’t want to live anywhere else but St. George’s.

For many years, Kenneth Bascome ran the franchise at Tobacco Bay. For two years, he was a UPB senator. In 1994, he served as a councillor on the Corporation of St. George, and in 1997 he was elected alderman. He was mayor of St. George’s, having been elected twice, first in December 2009 and again in May 2012. He would like to give thanks and praise to his mother and to his wife, Rochelle.