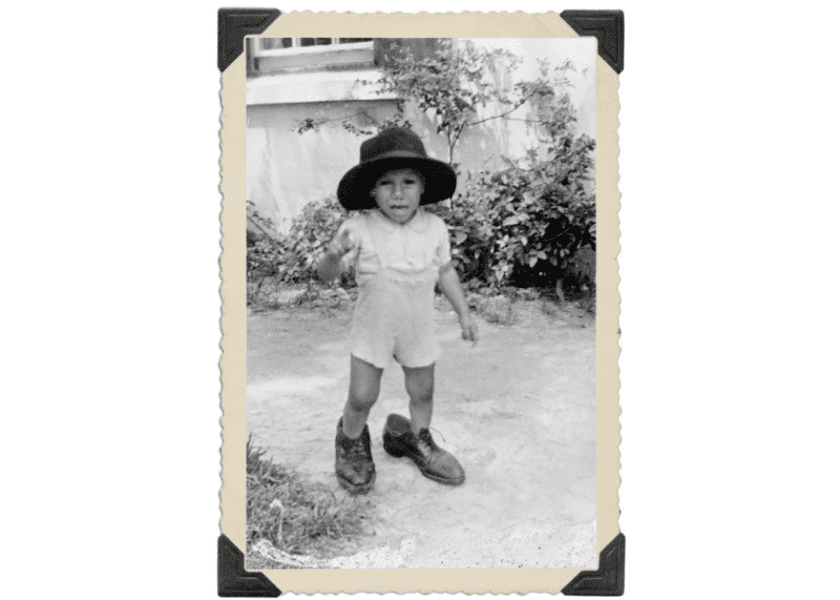 Where I Grew Up: Stuart Hayward, Pembroke Parish

Born May 19, 1942, in the King Edward VII Memorial Hospital, and the son of Lance Hayward and Mary Jackson, Stuart Hayward did not grow up in a rural parish as his passion for environmental conservation might lead one to assume.

Apart from a period when because of housing difficulties he and his mother lived with his grandmother in Devonshire, he was brought up in Pembroke. He spent his toddler years on Mount Hill and has a clear memory of the house where his uncle Robert had a writing desk and an inkwell for dip pens. “I remember being infamous for coming round to the ink well and drinking the ink! After the first time they kept an eye on me.” He also remembers another uncle who made wooden boats. “You’d put them on the water and poke them around. And I remember when I was very young I loved my tricycle—it was freedom.”

But most of his early childhood memories are of the City of Hamilton. “We lived on Victoria Street downstairs in Dr. Gordon’s building, and that was where my sister, Sylvia, was born.” At one point he also lived on Dundonald Street near the junction with Princess Street. But, as he points out, it was the pre-drugs era. “There was a corner where teachers and intellectuals lived who were a very good influence. But not all of Princess Street was your ‘upscale residential area’. Across the street there were the first of the early apartment blocks. But it was friendly, it was very safe. There was a sense of village—you knew your neighbours, your neighbours knew you and even your far neighbours knew who you were. They looked out for you. Today, we mostly hear about the scolding part but there was the caring, nurturing part, too.”

It was also, he says “interesting for a lad.” That’s mainly because Musson’s Factory was on Court Street. “They sharpened clippers, scissors and knives and if you had anything broken, he’d make a part to fix it.”

Hayward did play games, such as cowboys and Indians, hide and seek and later tops and marbles and cricket, which he played with his dad and his sister. However, on his own account he was more of a loner. “I spent a lot of time by myself with books. I just loved to tinker with things and take them apart to see how they worked.” He started off with clocks, radios with tubes (before the dawning of transistors) and windup gramophones. Later, of course, he moved on to bikes. Once his Aunt Henrietta gave him her old Mobylette. “I wanted to repair it so I could ride it. It took a couple of summers, but I did fix it! I got the reputation for being able fix things but at the expense of a lot of things that couldn’t be fixed.” Pembroke Dump became his “warehouse” where he could find bike parts and “all sorts of things.”

He remembers a printing/stationery store near Dr. Gordon’s. “There was a discard pile and on it there was a stapler with a reel of wire that the machine itself would cut, bend and push through pieces of paper to staple them. I loved the wire.” He also went to Lucas House which in those days brought in Lambretta scooters. “My mother and I would get the wooden boxes they came in and take them apart. The screws would add to her stock of screws and she’d use the wood of the boxes to build things.”

“My mother was a carpenter,” he continues. “It was her hobby. She had a hand drill and tools. When I was young, I would pick them up and pretend they were spacecraft or a helicopter. She would also sew because she loved fashion and made her own clothes. She had a Singer treadle machine I loved to play with.” But he never worked with her on projects—“I didn’t have her sense of excellence. I had a short attention span.”

His own room was part workshop—filled with the clocks and radios he loved to tinker with—and part chemistry lab. “Chemistry was my interest. I made many of the fireworks we set off for Guy Fawkes Night. Once I mixed gun powder onto a tray and put it in the oven so the pilot light could warm it. My mother put on the oven to bake something and noticed it. ‘What’s this?’

Anything that burned interested Hayward, a true Promethean. “I invented a gun out of clothes pegs that could shoot nails. But it could also shoot matches. I’d hold the matchbox close and the match would light, land and start a fire. My room always smelled of brimstone. It was all these stories,” he grins, “that convinced me I shouldn’t have children in case I had one like me!”

But if he did not work closely with his mother, he certainly observed the way she worked. “My mother never threw anything away. When she opened a can of peas, it got used as a seed pot, or it got cut if she needed the metal itself to make corners on the box she was making. She kept bottles for storing old buttons and screws. And she kept a compost pile for vegetable scraps plus ashes from the incinerator.”

So while he was not directly thinking about looking after the environment at the time, he was certainly influenced by her habits of thrift and recycling now so crucial for saving the environment.

Similarly, he did not learn music directly from his father, Lancelot (Lance) Hayward, although there was always music in the house. “There was always a piano and my father wrote for, arranged and directed a mixed voice chorus called the Hayward Ensemble. I’d sit under the piano. I knew all the different parts and would sing along. Sometimes I’d interfere by pulling faces or saying, ‘You didn’t do that yesterday!’ I was precocious. When my father practised by himself, I’d sit under the keyboard and sometimes they’d find me asleep there.”

But he never developed his own music until he moved out of his father’s house. “We had a tough time, my sister and I, because Dad cast such a huge musical shadow. When I was seven years old and taking piano lessons, I’d hear, ‘Are you going to be a famous pianist like your father?’ That was daunting. And then, too, he had his own standards. If he heard us playing, he would comment, lecture and scold. During my teenage years his quartet would practise at his house. I was allowed to sit there as long as I didn’t make a squeak.”

But he has a huge admiration for his father who was blind from a very young age because of untreated juvenile glaucoma. “He was a musician and a musician wasn’t considered to be a legitimate occupation. It was economically tough in the winter months when things quietened down and there weren’t gigs.” Hayward’s mother would send him to Champion’s grocery store on Euclid and Woodlands Road with a list. “We had an account there—very loose by today’s standards—and they would tally what we owed them. Our meals at that time were very meagre.” Because they lived in the city, there was no place to grow many vegetables or keep livestock.

While it’s true the Second World War opened up opportunities for entertainers, Lance Hayward had a particularly hard time because of transportation before the days of buses. “Dad was known to walk from Spanish Point to the Naval Operating Base on Morgan’s Point and sometimes as far as Dockyard for a gig. Remember, he was blind. He was a stickler for being on time. It’s hard to imagine he would get there an hour or more before the gig started. It just boggles my mind to think of him doing that and being blind.”

But he had a firm attitude towards his blindness. “My father would say, ‘An adventure taken wrong is a handicap. A handicap taken right is an adventure.’ That certainly influenced how I see adversity.”

During the hurricane of October 1947 when they were living at Dundonald Street, both father and son had an adventure. “My dad and I went walking when the eye came over the island. We got as far as the post office in town wh
en we decided to turn around and that’s when the wall of the wind hit. It was really scary. Sheets of tin, of corrugated iron were just sweeping along the road. By the time we got back to the house on Dundonald Street, it was in the full fury of the hurricane. A pride of India tree by the house had blown over and knocked down a wall. I had to guide my dad—we had to climb up the wall into the next property, go round the tree and then down the wall back into our driveway. My mother was worried stiff.” This is hardly surprising since her son was just five at the time.

It was Lance Hayward’s attitude towards his handicap that also allowed him to be an avid cricket fan. “He played cricket,” Hayward explains, “and he was a good bowler. We’d have to tap the wicket so he knew where it was. He knew the science of making the ball turn. And as long as you bounced the ball before it got to him, he was a good batsman. He understood the strategy of the game—how humidity and the time of day affected the game.”

So naturally every year the family would go to Cup Match and always supported St. George’s. “That was a given.” His mother would make sandwiches and pack them in shoe boxes—“They were just the right size”—and would make a special drink. “She’d put ginger beer and sprigs of mint into a Thermos and then add cubes of frozen pineapple juice. Once we got to the game, the pineapple would melt into the ginger beer. My sister and I still love that drink.”

As a young man it never occurred to him that he would one day run for Parliament. That’s not because politics weren’t a part of his family upbringing. They were. “My mother was PLP and general secretary to the PLP. There were lots of discussions and my father loved to debate. He was less publicly PLP than my mother; he was more issue oriented. But I always walked away from political discussion. I didn’t want any part of it. There was always a group that would come to the house. As soon as they would start, it would get to be loud and boisterous. I would go somewhere else.”

When he finally did run for Parliament, “My father was absolutely shocked. ‘My son? I don’t believe it!’”

Perhaps Lance Hayward later reflected on the fact that his son ran as an Independent. Certainly, it was Hayward’s independent streak that fuelled his commitment to fight Bermuda’s environmental battles by overcoming political and economic challenges. And that commitment is reminiscent of his father’s determination to make his own music despite the challenges presented by his blindness and economic standing.

As Hayward says, while he did not realise it as a young man, “There must have been some osmosis.”

Born May 19, 1942
After leaving Bermuda during the 1960s to pursue his further education, Stuart Hayward returned to the island in 1973 and was struck by the dramatic increase in building and loss of open space since his departure. Since his return, he has co-authored and co-edited Bermuda’s Delicate Balance, written numerous articles, stood as an independent Member of Parliament (1989-1993) and worked with many environmental organisations committed to conservation, including the Bermuda National Trust. He co-founded and heads up the Bermuda Environmental and Sustainability Taskforce (BEST).