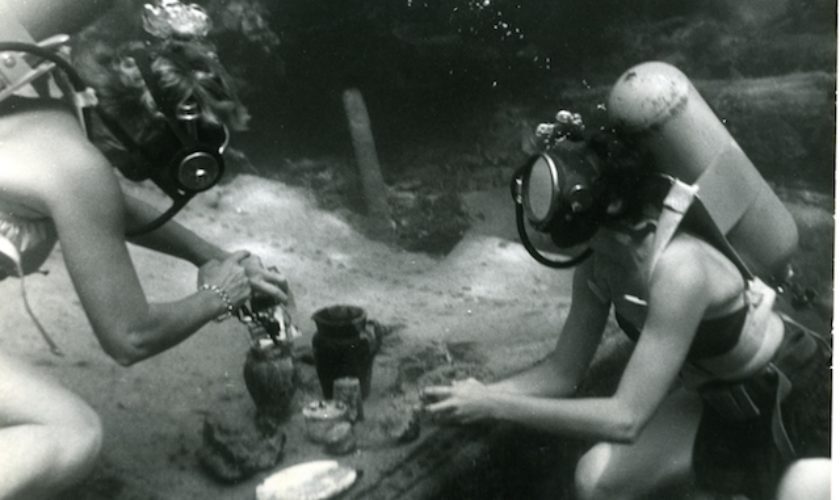 The potent lure of sunken or buried treasure can infect man during his childhood when he reads such heady yarns as “Treasure Island”, and it can stay with him long after he has reached staid maturity.

Here in Bermuda, veteran divers like Teddy Tucker and Harry Cox have succeeded in harvesting the sea floor, bringing up treasure in the form of gold and priceless artifacts. Nowadays, treasure-hunting techniques tend to become more and more sophisticated.

“One-fourth of all the gold and silver ever mined lies at the bottom of the sea.” So wrote Thomas G. Buchanan in an article titled “Largest Underwater Treasure Hunt” which appeared recently in “Sea Frontiers”, magazine of the International Oceanographic Foundation. Mr Buchanan went on: “The Spanish galleons returning from America more than three centuries ago lost cargoes worth one billion dollars within a few generations. Only in the last few years, however, have men had the tools to find and salvage a large portion of this shipwrecked treasure.

“Among the first truly scientific ‘treasure hunts’, conducted by professionals who are adapting underwater oil deposit survey methods to the search for gold and silver, is one now being organized in Paris.

“The French engineers will try this year to blast from the Silver Shoals, a long West Indies coral reef, the largest hoard of precious metal yet recovered from the ocean. Estimated value of the sunken treasure has been variously calculated to be between $20 million and more than $100 million . . . Target of the crew of more than 30 experts and technicians is the cargo of the Nuestra Senora de la Cencepcion, which went down in 1641 with half the loot that the Spanish conquistadors had amassed in Mexico during the twelve preceding months . . .Testimony from survivors of the Concepcion has been preserved in Spanish records. It permits the reconstruction now of the incredible succession of mistakes, chiefly provoked by greed, that brought the vessel to its tragic ending – from the time of its departure, at a season when bad weather was expected, to the sale of a ship’s anchor in Havana, culminating with the loading of so much of the precious cargo on the deck after the hold was full that sailors had no place to stand and were washed overboard, while the ship’s officers could not have fired their cannon if attacked by pirates.

The Concepcion, after surviving a storm, crashed into a hidden coral reef. The sole woman on board, together with 193 men, survived; 324 others perished. The ship sank in shallow waters on half-hidden rocks so far from any nation’s coastline that the treasure now belongs to anyone who manages to find the wreck and raise the cargo. Forty years after the ship’s sinking, William Phips, a 30-year-old adventurer from the British colony of Massachusetts, met a survivor of the wreck. Armed with information from this man and a few old coins believed to be a sample of the ship’s cargo, Phips went to London, where Charles II furnished the financial backing to equip a salvage expedition. As Phip’s vessel approached the site of the wreck his crew staged a mutiny, which by tough methods he was able to subdue. Leaving the mutineers in a West Indies prison, he returned to England to reorganize his expedition. By this time James II was on the throne. Phips was deprived of his ship and was temporarily imprisoned. But he found new backers for a fresh attempt to recover the treasure, and on his second expedition that portion of his cargo which ad been stowed on deck was salvaged – some 26 tons, about a quarter of the entire loot. Then, to England where his treasure trove was assessed at £300,000, an enormous sum in those days.  Phips mad a third and final attempt to recover the remainder of the reassure, but by this time it was locked by coral inside the sunken hull, and available equipment was unequal to the job of extricating it. Phips was knighted in 1687 and appointed royal governor of his native Massachusetts.

The leader of this year’s expedition. Alexandre Korganoff, has read all the contemporary documents relating to the shipwreck, in Spanish and in English. He has also made reconnaissance expeditions to the treasure site.