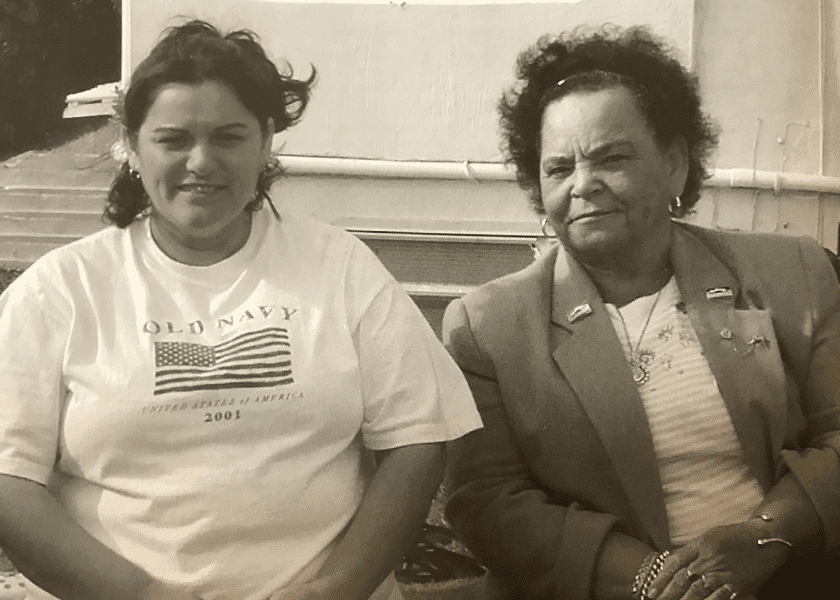 This article was taken from our archives. It first appeared in the May 2002 issue of The Bermudian. It appears here exactly as it did originally.

Dolly Pitcher is sitting in Fernanda Pacheco’s kitchen in St. David’s. It’s a cold, windy day that finds me talking to these ladies about family lore and old Azorean and Bermudian recipes—like shark hash.

Dolly explains: “Take the head and tail off the shark and cut it into nice pieces. Boil it in salt water and when it’s done, take off the skin and leave it to cool down. Yes, it has a strong smell, shark meat. The fin is a delicacy in some parts, you know, but we don’t use the fin.

“Put the meat in a cheesecloth and squeeze out all the juice, then crumble it just like breadcrumbs. Fry the shark liver until it’s crispy and you’ve got all the oil out of it. Yes, I can read a shark oil lamp. I’ve been very good at saying when a hurricane will hit, except that one time, when I lost the living room and the roof.”

She continues: “It’s the parsley that makes it green, and my shark hash has fresh thyme in it, not everyone likes the thyme, but I do. You can add some hot peppers if you like it spicy, and that makes it red and green. Serve it with rice, sweet potatoes and pumpkin, or you can have it as a side dish with toast.”

Like me, Fernanda has never tasted Dolly’s shark hash. “A lot of people haven’t tried it,” Dolly says. But as for her fish cakes and muscle pies, that’s another story. The crowds flock to her stall every Cup Match.

Anxious not to hog the limelight, Dolly says: “Fernanda has stalls too. She is very good about helping out at school fairs.” Her friend has produced some Portuguese doughnuts, malaçadas, for me to try. Butter yellow and frosted with sugar, they taste different from ones I’ve tried before. I remark that they are much softer and ask Fernanda if it’s lemon I can taste. “That’s one of my secrets,” she says. “Just a touch of lemon essence. Some people don’t use it, but then they just taste of oil. Other peoples’ you have to make them and eat them the same day. Mine you can eat for about a week. That’s because I add a teaspoon of baking powder. That’s another secret.”

The two women love to share their cooking secrets with each other. Dolly is St. David’s born and bred, while Fernanda is a relative newcomer, having moved there five years ago. Born in the Azores, she has been in Bermuda for 22 years. How does she like St. David’s? “It’s the best,” she says. “More quiet, people you can trust, people are friendly.”

The two have been friends for years and are constantly in and out of each other’s homes. They both participated as culture bearers for Bermuda Connections, which was staged at the Smithsonian Folklife Festival in Washington DC last year. Whenever they cook something new, they bring it over for the other to try. They say they learn things from each other. You get the sense that it helps to fill the void left by loved ones who have passed away.

Fernanda learned to cook from her mother, who died when she was only 12, and later, from her mother-in-law, who took her under her wing. A lot of memories of her mother are associated with the food she used to make in their village in the Azores.

“She was very generous, my mother. At Marcarados, that’s Portuguese Halloween, she used to make malaçadas to put in all the children’s bags. And when someone in the village was getting married, my mother would work day and night preparing whatever that person wanted for their banquet. She was a special person.”

Fernanda says she tries to reproduce the recipes her mother made, but sometimes it is hard to get that same, special taste. Dolly nods sympathetically. She learned how to cook from watching her mother, Joyce, and father, Sidney. Both of them had a great reputation and cooked all over the Island. Her mother was a chef at Mid-Ocean Club, while her father was a cook for Hamilton Mayor Chesley White who lived in Tucker’s Town.

“I only wish I could cook like him,” she says of her father. “Anything came in his head he just mixed it up and it always came out right.”

To my observation that codfish features in both traditions, the ladies point out that their different ways of preparing it are quite distinct.

The famous Azorean codfish or bacalhau recipe includes chickpeas, kale, potatoes and hard-boiled eggs, while Dolly’s favourite way to prepare codfish is to fry it up on onions, rice and cabbage. “Everything I cook has onions in it,” she says. “And rice,” Fernanda add. “She’s a rice eater.”

I admit that the only time I have attempted to cook codfish, I made a complete mess of it by not soaking it for long enough. “Oh that’s easy to fix,” says Dolly. “You should have just taken it out and boiled it up in another pan of water. The salt would come right out.” While I am with the experts, I want to get to the bottom of the whole soaking and water changing process for codfish.

Dolly uses imported frozen mussels and conch for her famous pies because local species have been protected by conservation orders for decades. She insists they are plentiful: “Oh there’s plenty of mussels and conchs are thick, but they just don’t want you to take them out of the water.”

To cook both conchs and mussels she puts them on at 9 at night and leaves them on a low heat until early the following morning. “People say the longer you cook mussels, the tougher they get, but that’s not true,” she says.

Fernanda says: “We cook mussels as well, you know, but with rice.” She describes the dish her mother used to make, which resembled Spanish paella. “Even today I remember the taste of the mussels she made. That was my special food.” She recalls how no one made them quite like her mother and that she was famous for them.

Clearly, she has inherited her mother’s good heart. Every year on December 15 she opens her house to the public so that they can view the Christmas scenes which she creates. Her children Nelson and Jessica help her to arrange hundreds of porcelain models in scenes depicting the Nativity on the floor. Nelson is a good artist and last year he painted a beautiful starry backdrop on the living room wall. “The children love it. We get lines going right out the door.”

I tell Fernanda that I’ve heard about her Christmas scenes and that she is becoming famous, the way her mother used to be. “Oh she’s still famous in heaven,” says Fernanda. “She’s doing a lot of cooking up there.”