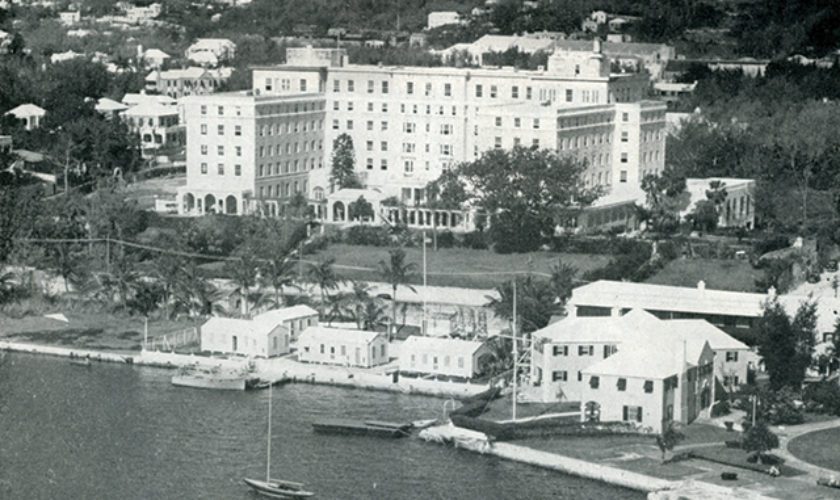 Walk through Queen Elizabeth Park (formerly Par-La-Ville Park) from Queen Street and you will find a moon gate with vine-covered steep steps leading down to Par-La-Ville Road. Across the road, the white Brian M. O’Hara House building rises several storeys high. But if the moon gate were to offer time travel as well as good luck, then the road and steps would not exist and neither would the Brian M. O’Hara House. Once, the moon gate led directly into the beautiful grounds of the old Bermudiana Hotel, opened in 1924 thanks to the shipping line Furness Withy, which saw the need for a luxury hotel on the island since more and more guests were visiting from North America. In Bermuda Recollections, Ross Manders recounted being hired as a straw boss to help build the hotel once construction reached the fourth floor, while Helen Little explained that the hotel closed in 1939 at the outbreak of the Second World War, opening again in 1941 to house members of the Imperial Censorship. By that time, a tunnel had been cut and the Bermuda Railway train would rattle past the hotel.

After the war, the Bermudiana had a makeover and in 1951, according to Maire Feenan in The Bermudian, it reopened as Bermuda’s first apartment hotel, offering accommodation to both transient and permanent residents who could lease these apartments complete with “kitchenettes” by the month or the year. But it also offered another attraction and a first for Bermuda: a professional repertory theatre. (Amateur theatre was not new to Bermuda—at that time there were a number of theatrical groups, including the Bermuda Musical and Dramatic Society, the New Theatre Guild and the Bermuda Repertory group, which often performed at the Garrison Theatre in Prospect. There were also shows directed and presented by Carol Hill, who taught drama at Prospect Secondary School for Girls.) The advent of the new theatre made the front page of The Royal Gazette on January 28, 1951. “Bermudiana Theatre to Open in March,” the headline announced, “Different Play Each Week With Noted Stage Stars.” And then, the seemingly innocuous subline: “Year-Round Theatre Club Is Planned”— which would lead to a real-life drama enacted outside the theatre and within Bermuda’s parliament.

The article explained that a “21-weeks’ season of continuous plays” would be offered and that the new theatre within the Bermudiana Hotel would allow performances to be viewed in an “atmosphere of luxury and comfort on a par with any metropolitan theatre.” The theatre was designed by C. Howard Crane, whom the article described as the “creator of the famous Music Box theatre in New York which is regarded as one of the most beautiful in the world.” The theatre, conveniently situated next to the Tudor Tap Room bar where snacks were served after the performance, could seat 445 people. The new theatre would open with a five-week season of plays performed by professional actors on “secondment” from the Berkshire Playhouse Company, in Stockbridge, Massachusetts, and by well-known actors of the time, such as John Loder and Edward Everett Horton. Plays would include The Hasty Heart, Springtime for Henry and Yes, My Darling Daughter. The season would end with the “world premiere of a new play, ‘Keep Your Head’ by the internationally known humourist P. G. Wodehouse…”

In February, ads started to appear in The Royal Gazette seemingly encouraging the public to buy their “5-week Subscription Tickets for the Opening Season at The Bermudiana Theatre Club.” The word “club” can be defined as an organisation designed to keep some people in and other people out. The significance of “theatre club” became clear when black members of the community tried to book their subscriptions and were refused on the grounds they were not club members. However, tickets were freely sold to white tourists who also were not members of the club. Bermudian Dick Butterfield remembers this because in 1951 he was manager for a year and that experience made him fully understand, possibly for the first time in his life, the unpleasant realities of Bermuda’s racially divided, discriminatory society. Though black entertainers sometimes performed at the hotel, black guests were barred from attending, as was true in other hotels. Every night, dressed in his dinner jacket, he would greet members of the audience. Sometimes, as a gesture of protest, a black guest would arrive, and he would have to turn him away because the theatre “was a private club.”

Georgine Hill, originally from desegregated Boston, had come to Bermuda in 1941with her Bermudian husband, Hilton Hill, Carol’s brother. Horrified from the start by the segregation and discrimination in Bermuda’s schools, hotels, restaurants and places of employment, she was determined to combat this new example of exclusion on basis of skin colour. As Nellie Musson points out in her account of the theatre events in Mind the Onion Seed, Carol shared her determination, particularly as she wanted to give “Black Bermudians, and particularly black actors, the benefits of seeing professional actors perform…” Both Georgine and Carol, as well as Hilton and Eva Robinson, were founding members of the New Theatre Guild.

Together the two women picketed the Bermudiana Theatre Club’s box office on Front Street on February 21 and 22, 1951. Their chief aim was to alert tourists, particularly those from America, rather than locals, to the theatre’s policy. The following day The Royal Gazette published the statement that the “Bermudiana Theatre Club was a bona fide club reserving the rights of membership, and that membership was limited to persons of unmixed European blood only.” A small picture of the picketers appeared on the back page of The Royal Gazette on February 24, although a report that members of the House of Assembly E.T. Richards and Russell Pearman had raised the issue did appear on the front page: “Discrimination Issue Raised in Assembly.” However, by the end the reported discussion focussed on misrepresentation through false advertising rather than on unethical racial discrimination.

Parliament offered little hope of resolving the issue, but the Guild did not give up hope. Georgine in her role as executive secretary of the New Theatre Guild wrote to the executive secretary of Actors Equity in New York asking for help in combatting discrimination in the Theatre. On March 10 he duly wrote a letter to The Royal Gazette, explaining that Actors Equity’s polices did not support discrimination. Equity Magazine publicised the issue and suggested actors should not perform at the Bermudiana until the policy was changed.

In reaction, the Theatre Club offered an unsatisfactory compromise which was reflected in new ads. Three nights would be open to all—Monday, Wednesday and Friday nights—and the Thursday matinee would be for club members. The opening night would be reserved for the governor and specially invited ticket holders only. Georgine promptly wrote to a British Member of Parliament pointing out that if the governor appeared on a whites-only night he would be seen to be supporting racism. As a result, the Secretary of State for the Colonies advised the governor “he should attend the Bermudiana Theatre Club only on nights when the general public could also attend.”

How would the social elite feel if the governor was not in attendance on the opening night? The victory was won: The doors were finally opened to all for every performance. And eventually the ads for the performances dropped the word “Club” altogether.