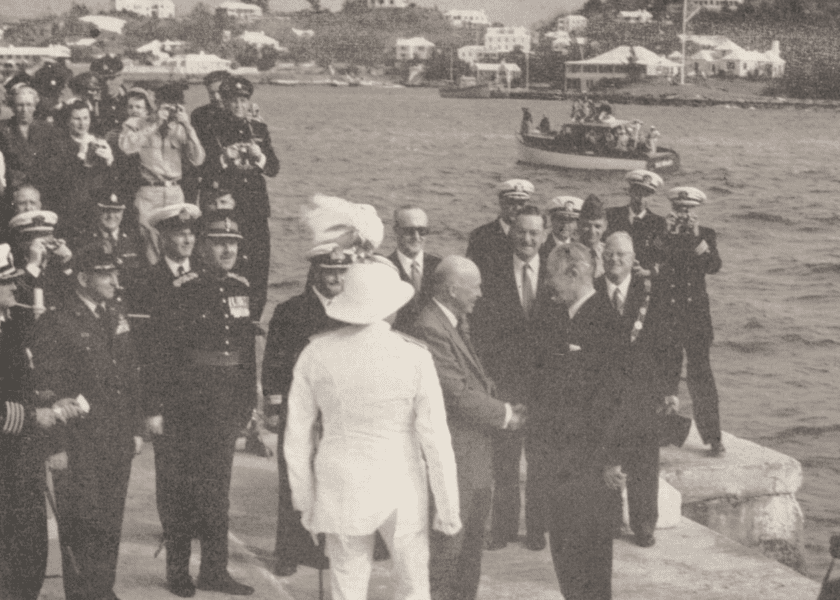 This article was taken from our archives. It originally appeared in the Spring 2007 issue of The Bermudian. It appears here exactly as it did in print originally.

The Eisenhower-Macmillan Conference in Bermuda, March 20–24, 1957

If the stories the media carried at the time are anything to go by, the new British prime minister, Harold Macmillan, and the American president, Dwight Eisenhower, met in Bermuda for little more than a schmooze fest, to show the world that the special relationship between Great Britain and the United States still thrived, despite their differences over Suez.

At the Mid-Ocean Club overlooking Bermuda’s blue green waters, President Dwight Eisenhower and Britain’s Prime Minister Harold Macmillan planned to eat together, drink together, perhaps golf together for four days. These old friends of World War II days (when Macmillan was British Resident Minister at Ike’s Algiers headquarters) had no formal agenda but much on their minds. Their main problem was to re-establish, between two nations, the working relationship that was shaken by Britain’s decision to throw in with France and Israel on Suez.

And Time ended its last story on the conference with this paragraph: “At parting, the President and the Prime Minister had good reason to be, as their joint communique put it, ‘well satisfied with the results of this conference.’ The Big Two alliance was back in business.”

Restoring the relationship was certainly important, but it was far from the only important topic of discussion. In fact, the Bermuda meeting was a reordering of the way some things worked in the world, one that would last pretty much for the rest of the Cold War. The process was certainly necessary in the wake ofAnthony Eden’s disastrous Suez blunder, but more importantly, it was necessary because of huge political and economic changes caused by World War II and the reordering of world power in its wake.

There was an agenda, of course. No four-day meeting between two such men can proceed without an agenda. Among the things they discussed were:

Each of the two countries needed the other’s help, but Britain’s need was greater, and the prime minister knew that he was going to have to pay a price to get what he wanted.

President Eisenhower came to Bermuda on the USS Canberra, a battle-scarred, Pacific fleet, heavy cruiser that only a year before had completed a refit as a guided missile cruiser. The Canberra was armed with Terrier missiles, a relatively new weapons system brought into service in June 1956. The Terrier was a medium-range, surface-to-air missile that could carry a nuclear warhead, so it was an important part of the U.S. defence capability. En route, Ike watched the system demonstrated, toured the ship, dined with its officers, watched the film Three Coins in the Fountain, and, of course, practised his golf shots.

Prime Minister Macmillan came by air, and it’s a fair bet he chewed his fingernails. The meeting must be seen against the background of how far Britain had fallen as a result of the war and how difficult its new position was, both practically and psychologically. It had been evident to the British government since the end of the war (if not quite so evident to the British public) that it could no longer be one of the most powerful countries in the world.

It couldn’t afford it, for a start. Its all-important empire had begun to decay—the old Gold Coast was going to become an independent Ghana in 1957, and independence movements were at work everywhere. Anti-imperialist voices were rising around the world, given new impetus by a sympathetic United Nations.

Suez had been the last fling of the old, imperialist world order. Far from “throwing her hand in” with France and Israel, as Time put it, Britain had been the moving force. The three countries intended to invade Egypt to stop the nationalisation of the Suez Canal, which not only threatened their commercial interests but also challenged the prestige of Britain and France as proud imperial powers. Moreover, the challenge had been thrown down by a bumptious and objectionable little radical in the shape of Gamal Abdel Nasser.

It seems hard to believe today, but Britain and France did fail to appreciate how much the world had changed since the war. They made the mistake of not telling the U.S. about their invasion. President Eisenhower, who understood the changes perfectly well and knew that he was essentially making a choice between the bad old days and the promise of the future, denounced them. The Soviet Union threatened to intervene on Egypt’s behalf. The invaders, under pressure, made an acutely embarrassing withdrawal.

It was a hard way to learn that in the postwar world one could no longer slap stroppy little countries back into line. Worse, it was an utterly humiliating way for the rest of the world to find out that France and Britain, those once proud imperial powers, had fallen on hard times.

In the aftermath of Suez, France distanced itself from the U.S., a position it maintains to this day. Britain, despite a feeling (which Macmillan shared) that President Eisenhower had let the side down, decided that unless it could join itself to the U.S. hip, it was going to become…oh, the horror!…just another insignificant European country.

At the Bermuda Conference, Prime Minister Macmillan was persuaded to back away from his inclination to withdraw from the U.N., although he did get a general understanding that efforts should be made to deal with international disputes outside the U.N., either through bilateral negotiations or such security organisations as NATO, SEATO and the Baghdad Pact. Where that was not possible, the two leaders agreed that every effort should be made to deal with disputes through the Security Council, not the General Assembly.

It was agreed that Britain would associate with Europe more closely than it had in the past, to exert, hopefully, a helpful influence on the countries of Europe. The U.S. was particularly concerned that the proposed common market, and free-trade area, would turn into a high-tariff bloc, which might exclude U.S. commercial interests from that market.

The two countries agreed to a policy on nuclear testing that put pressure on the Soviet Union by emphasising responsible testing, openness about testing schedules and willingness to allow international observers.

The agreement on nuclear weapons was complicated. In essence, the U.S. agreed to share nuclear-weapons information with Great Britain, despite sharp disagreement from some quarters within the U.S. government. In exchange, the British government permitted the U.S. to base Thor medium-range nuclear weapons on British soil and to launch U-2 spy-plane missions over Soviet territory from British bases.

The two countries also addressed what had been an ongoing difference, secret at the time, about the circumstances under which the Americans would use nuclear weapons. Since the early days of the Korean War, when there was a risk of world war, British prime ministers had wanted a voice in any decision by a U.S. president to “go nuclear.” There were verbal agreements with President Truman and a communiqué, written for the Churchill-Truman talks in 1952. Prime Minister Macmillan did get a secret agreement, signed after the 1957 conference, that the Thor missiles in Britain would be under joint U.S./British control, through a two-key system. And work began on another secret agreement that London would be consulted, “to the fullest extent possible,” in any decision to use nuclear weapons.

The missed loan payments, of course, were forgiven.

Harold Macmillan had much to be proud of as a result of the meeting with President Eisenhower in Bermuda. Britain had, indeed, joined herself to the U.S. hip and so secured her future as a major world power.

It rained in Bermuda for much of the conference. Despite that, the prime minister went to Kindley Field to see President Eisenhower off for the four-hour flight back to Washington. As the president disappeared through the door of the aircraft, the prime minister (I like to think he was standing in the rain) raised his arms in a giant V-for-victory sign.