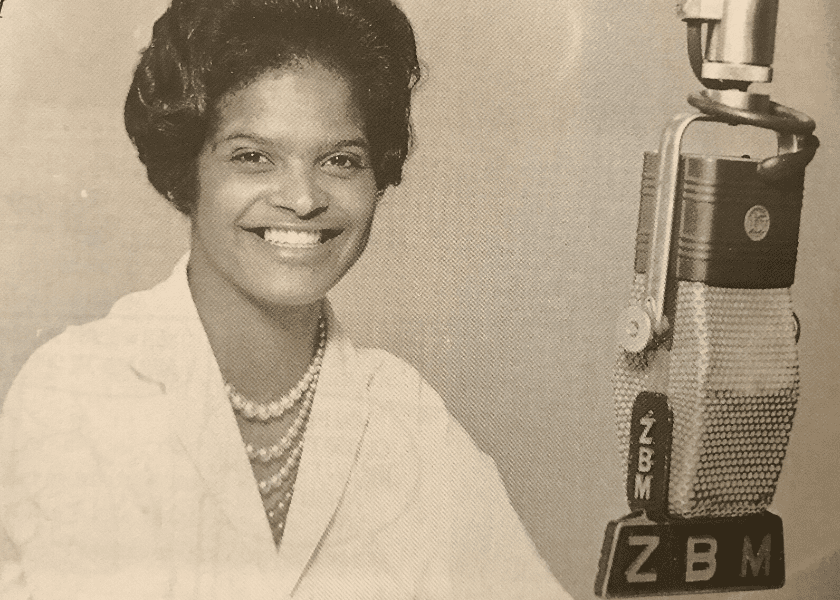 The Charmed Life of Nell Bassett by Meredith Ebbin

This article was taken from our archives. It first appeared in the November 2001 issue of The Bermudian. It appears here exactly as it did originally.

Long before Bermudians knew what the word meant, Nell Bassett had it. Chutzpah. It was what propelled her from a life of obscurity as a gym teacher to a career of considerable prominence as a broadcaster, first in Bermuda, then in New York.

Now after 35 years in the U.S., the woman who will always be known to 40-and 50-something Bermudians as Auntie Nell, has come back home. She’s remarried – on the eve of Cup Match – to old sweetheart Kenny Harris and is back on the air.

Nell Bassett, now in her 60s, is still a tall brown beauty with a dazzling smile. The voice that captivated a visiting New York station manager is deep and throaty, the diction, crisp and precise. She moves with an easy grace that comes from being a champion athlete as a girl. At the White Sands Hotel, in Paget, where she is residing temporarily before taking up residence with her new husband in St. George’s, Bassett reflects on her charmed life. “Life has been good to me,” she says. “I am very blessed. God has taken a liking to me.”

Basset’s first job in New York was with radio station WNEW, where she became a member of the five-woman broadcasting team that launched its new FM format. She left WNEW after landing a role as a senator’s secretary on the NBC soap opera Hidden Faces, later moving to CBS’s Love is a Many Splendored Thing. Hidden Faces was short-lived by soap opera standards, but she was with the show for three years. She later appeared in an Andy Warhol movie, Chow Manhattan, a role that causes her much amusement even now. “I played a madam in a brothel,” she says. After her stint as an actress, she returned to radio. Between 1981 and 1991, she was vice-president of public affairs for NBC radio and has overall responsibility for all public affairs programmed for the station. For nine years, prior to her return to Bermuda, she was executive director of the Art Center of Northern New Jersey, a place she describes as “very fine school in New Milford, New Jersey.”

When she decided “out of the blue” about a year ago to pull up stakes and return home, she had an impressive career in broadcasting to look back on. With her own company, Corporate Events Management, she taught public speaking to people in the corporate world.

Bassett came of age in a totally different era from now, where finding a dream job can often be a career in itself. Bassett has never had to pound the pavement in search of a job — the jobs came to her. “I was very fortunate that way. I guess it’s because when I did something I did it 100 percent. I was very lucky.”

When Nell Bassett left Bermuda in 1966 with her young daughters, Roxanne and Penny, for a new life in New York, she was “a star,” fellow broadcaster Quinton Edness recalls. She came by her star status totally by accident. She was a gym teacher at Central School, entertaining a group at her house after a Saturday morning training session when she turned the radio on to The Children’s Hour.

Appalled by the quality of the programme, she called ZBM to complain. Manager Gordon Robinson’s response was: “Do you think you can do any better?”

As events would later prove, she could. Bassett became the new host and was such a hit, the station created the after-school, five-day-a-week television show Junior Club just for her. The star Auntie Nell was born.

In those early days in the broadcasting booth, she had to rely on her natural ability and advice from new colleagues, like Pat Dunch, who told her “make sure the microphone is on.” There were times it wasn’t. She leaned heavily on Quinton Edness, who was something of a star himself as host of the afternoon show Quinton’s Matinee, but light years away from his future career as a politician. Edness had formal training as a broadcaster in Canada and was a big help, she recalls. His advice was: “Make love to the microphone.”

Edness recalls: “Nell was a natural. She had charisma, plus she was full of enthusiasm. She had to be taught the technique of broadcasting — how to use the mike, how to put the music together, how to be able to hold an audience. There’s a technique to that which they don’t do today, incidentally. She had to be taught how to use her natural language in a broadcasting way. In broadcasting you have to enhance the music of the artist. She got to know the music. After that I would say: ‘Now what you have to do is make love to the mike.’ She did and she still does. She became a star. She loves people. She’s not afraid to mingle. She loves children. That’s why we started the Aunt Nell show. That became one of the most popular shows on TV. She was world-class.”

Bassett would work for ZBM radio and television for six years. Junior Club was broadcast live, and young viewers could come on the programme to interact with Auntie Nell. Bassett says her goal was to encourage children to read and to know the history of Bermuda. “I think I achieved my goal in six years,” she says.

New York, however, was beckoning. Stations were switching to the FM format and top New York station WNEW wanted to launch theirs with a team of five female announcers. One of the five was to be a black woman, but the voice they were seeking eluded them, until visiting station executive John Dale heard Bassett on the radio. Bassett recalls he told her: “We need you in New York.” And WNEW got her. Another executive was flown to Bermuda to interview her and there was much consultation with her close-knit family. She ultimately made the move and never looked back. Her time in New York, she says, was “fantastic.”

Bassett gives much of the credit for her success to her parents. One of six children, she was raised in Somerset. Her sister Marlene B. Landy became a broadcaster as well. Bassett recalls their growing-up years. “We had to make a presentation at the end of the day. Marlene recited poetry. I would quote from Shakespeare. If we didn’t speak clearly, my father would say, ‘I don’t understand what you are saying.’ We have a natural gift for speaking because we had to.” She says her father William Richardson was following the example set by his father “Bye” Richardson, who conducted a mass choir in Somerset. “I’m told he was the one who instilled it in his son to speak properly,” she says. Bassett’s mother Venetia Manders was a pianist, who played for silent movies shown in Bermuda and at Sunday afternoon musical gatherings at home. Her parents, she says, weren’t trained as teachers, but “they were teaching in their own way.” As a young adult, Bassett acted in plays staged by Hastings Saltus, an experience that she could draw on during her soap opera days.

Bassett lived in Brooklyn when she first moved to New Jersey, but later took up residence in New York. She married second husband Harold Carter and had a third daughter Tiffany. Her two elder daughters worked in Bermuda in the 1980s — when daughter Penny graced the cover of The Bermudian. All three now live overseas, and Carter is now grandmother of three. She was widowed six years ago when her husband died of leukemia. She moved to a new apartment in Hackensack, cemented her ties with “her three talented girls” and threw herself into her responsibilities at the arts center.

One day “out of the blue,” she decided: “I’m going home.” Sister Marlene — “sisters we may be, but best friends we are” — was thrilled, the art center board, less so. They were shocked, but her mind was made up.

By the time she moved back this year, she had rekindled a friendship with musician and broadcaster Kenny Harris, with whom she was reunited when she came to Bermuda in 1999 to speak at a conference. A long-distance relationship began, and the two were married on July 29 at White Sands Hotel before a small gathering of family and friends.

Bassett is now adjusting to Bermuda’s slower pace of life. Does she think she can adapt? “I’m going to adjust because my mind is made up. I need to have a slow pace. I think sometimes I might get bored, but Kenny won’t let me get bored.”

Bassett has been filling in as an announcer on VSB, where Harris works, and plans to volunteer for children’s charities. In New York, she served on such boards as Girl Scouts, Easter Seal Society and Special Olympics.

Now home for good, she has reverted back to her old name, Nell Bassett, because: “People still call me that. That’s what helped me on my way to a major career.”