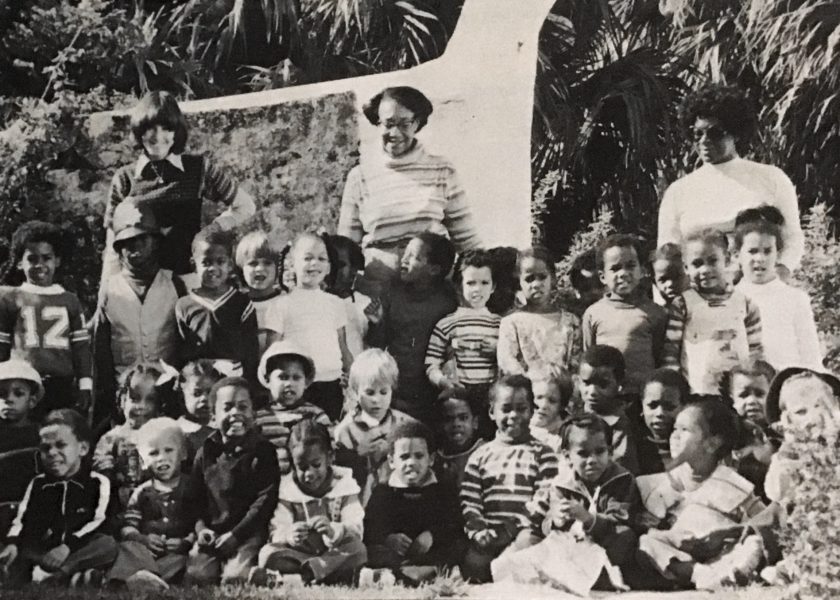 The three teachers (From left): Mrs Morrison, Mrs Richards and Mrs Cann with their Springfield family.

The Class of ‘81: The Springfield Family

This article was taken from our archives. It first appeared in the December 1980 issue of The Bermudian. It appears here exactly as it did originally.

One of Bermuda’s oldest homesteads has been given a new lease on life. Now, and throughout the school year, the voices of little four-year-olds echo through a large portion of Springfield in Somerset. Thirty-six children attend Government’s free nursery school programme here. “When you walk through the gates here, you enter a different world. The programme is very flexible. We do what the kids want to do and find that everything falls into place,” says Mrs Gilda Richards, the teacher in charge ever since the school moved from St. James’ Church Hall eight years ago.

When I walked through those gates during the morning free period, a group of children were engrossed in playing over a tub of soapy water. Little fingers were squeezing suds from plastic bottles and peels of laughter wafted around the courtyard between the National Trust buildings. Streams of water gushed forth. I kneeled down beside them and asked if I could take their picture. Within seconds four more children heard the request and joined the others.

The Springfield school is spread between three buildings. When I walked into the main building, I entered the reception room. A group of tiny tots was busily hammering nails and sawing off pieces of wood. Behind them was a backdrop of photographs of each youngster. Upon arrival every day, each child turns his picture around to make his presence.

In the adjacent room, goldfish swim in a tank and a hamster scurries in fruitless circles on its exercise wheel. From the ceiling hang the letters ‘F’ and ‘H’. “We work on the alphabet throughout the year. Each week or so we teach them a different letter,” explains Mrs Richards, 45, who was trained in England and later earned a degree from Queen’s University in Canada.

A television sits in the corner. It is used to show “Sesame Street”. A walk through low doorways and a narrow hallways leads to the activity room, doll’s house and then the art area. Mrs Jocelyn Morrison, new at Springfield this year, is working with a group of children. Since it is such a beautiful day, the artists are painting on easels outside in the courtyard. Alongside are a group of play-dough sculptures.  Mrs Morrison, 28, who was trained in Cardiff, Wales, explains: “Here, the programme is fairly free. Inside this building the small rooms make it defined as each room has a purpose and this makes it fluid too.”

Mrs Richards then takes me across the courtyard to another of the school’s buildings where there are rabbit hutches. “They have the rabbits out each day — the kids named them “French Fry” and “Thumper”. Some of our parents gave them to us. Having rabbits makes them realize that animals have feelings too. They learn that they are nice, that they are soft. It gives them a chance to care for them and teaches responsibility,” says the soft-spoken Mrs Richards. “We have one parent who brings a dog who does obedience.”

She stresses the good relationship with parents, grandparents, and families in general. “We love them. They help with everything — picnics, outings.” Mrs Richards then takes me into the kitchen. “The children learn to cook with the parents who come here to help. They have made hamburger rolls, cookies, orange jelly for Hallowe’en. They measure the flour, and break the eggs with supervision. They also mix and roll out the cookies. They get very, very involved,” she says.

Besides the kitchen, there are the bedrooms with little camp-cots for daily naps in the afternoon. The staffroom is close by.  Across from the courtyard are the music and lunch rooms. The surrounding gardens are large and the children play outside whenever weather permits.  I found Mrs Paula Cann, 30, the teacher’s aid, supervising a group playing on the slide. Amidst pleas of “Hey, it’s my turn,” I asked how she enjoyed her job.  “I love it, but it is tiring,” she says with a smile. “It’s my first year here. I used to be at Boaz Island as a volunteer…” Mrs Cann then looked sharply down the hill to a lone child. “Fred! Take the saw inside! Don’t saw down the trees! Sometimes it’s difficult to keep track of the kids,” she continued, “but they are usually very good.”

The Springfield programme stresses learning through fun in the form of games, utilizing the five senses. There are tasting games when the children are blindfolded and are asked to identify foods beginning with ‘C’. They eat coleslaw, carrots, cheese, crackers, candy.  “When we get to the candy, we show them how it is made and what it does to their teeth and then we explain health and how to take care of their teeth.” says Mrs Richards. “We work around themes such as summer or family. The children bring in pictures of their families and put them on the board. We will probably concentrate on careers next. We will have some parents come in to talk about their professions,” says Mrs Richards. The children are taken to visit the dentist or doctor so that they get to know them before an emergency or normal check-up arises. “People are afraid of things they don’t understand and we try to break them of possible fears,” she continues.

One mother is on the Police force. Mrs Richards is hoping that she will visit the school to explain the job. “We have taken the children to the Police station before to give them a chance to sit in a cell to see what that is like. They have their fingerprints taken, too.” Field trips are a big part of the Springfield school. The children have seen a turtle display and then watched them being freed into the ocean. “They have even been to a farm where there is a slaughterhouse,” says Mrs Richards. “They don’t go in if they don’t want, but a lot do. We do this to teach them that in order to eat meat, something has to die.”

I asked Mrs Richards how she enjoyed her job with the Springfield children. “In the beginning I thought that I’d be bored. But I’ve been here eight years and I am thoroughly enjoying it still. I wouldn’t switch now. The kids are so lovely. They have no inhibitions at this age. They are honest and say exactly what they feel.”  Mrs Richards’ devotion to this job is evident before school opens. She and the other teachers usually manage to visit the new students in their homes before they actually start school. “This just makes it easier for them. They see a familiar  face. And it helps me to get to know the children and the parents.”

With lament in her voice, Mrs Richards explains that the four-year-olds come only for a year before going to primary school. Occasionally, a child will repeat the year.  “The kids settle in well in the primary schools, says their teachers. They are interested, ask a lot of questions and all of the primary school teachers say they are pleased with the Government nurseries,” she continued.

I was pleasantly surprised when I called Springfield and the child who answered did not put the ‘phone down. (My previous experience has often been otherwise!) “Springfield Nursery,” a horse, little voice answered. The child promptly asked Mrs Richards to come to the ‘phone.

Mrs Ruth Thomas, the education officer with special responsibility of the 11 Government nurseries and through Primary One, describes Springfield as “The Doll’s House”. She notes that this school is the only one housed in a series of rooms. “Fortunately, Mrs Richards is able to work in this type of environment. Others prefer to work in larger rooms. At Springfield they are lucky because they have such a large area outside. Our open programme is determined by the amount of space,” she says.

Mrs Thomas ensures that the nurseries are settings where the children’s intelligence is nurtured. “They only grow according to the nurturing. We encourage a healthy sense of self-worth or self-esteem. We like for them to have a positive sense of themselves, otherwise their learning will be hampered if they don’t have this positive self-worth. The programme places emphasis on language development and physical development of the child and the cognitive side as well.”

All teachers are constantly on the lookout for children with possible physical or learning disabilities. Government Clinical Psychologist Dr Norma Astwood observes the children and makes recommendations accordingly. “These children are lucky because the teachers we have are so devoted. The emphasis is on reason and understanding,” smiled Mrs Thomas.

And the Springfield Family says it all.