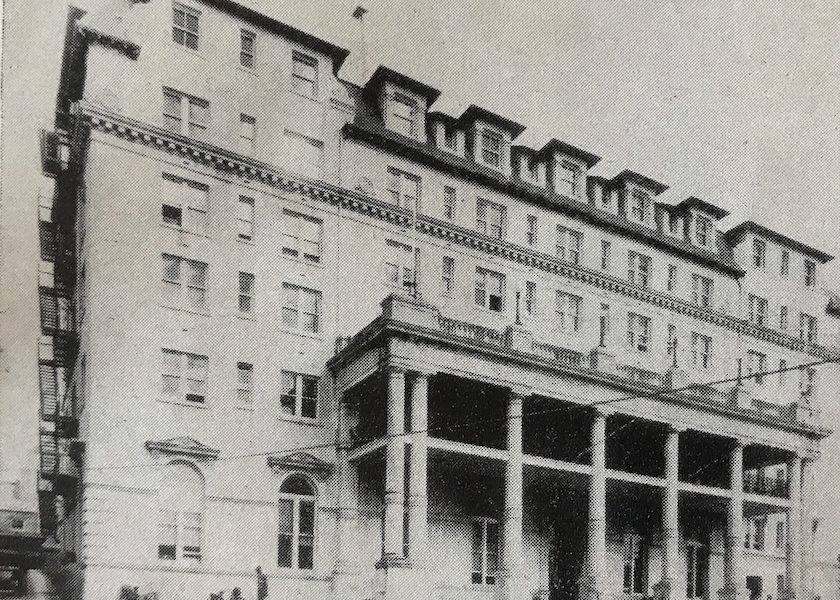 The Day the Hamilton Hotel Burned

On December 22, 1955 The Grand Hamilton Hotel Burned to the Ground. Here’s an account of the spectacular and historical event from our archives.

The long and acrimonious controversy over the future of the Hamilton Hotel ended simultaneously with the long history of the old structure. In the early morning hours, two days before last Christmas, the huge building was gutted in the most spectacular and biggest fire ever seen in the Colony. The blaze exceeded in ferocity that which destroyed the luxury liner Bermuda as she lay alongside her berth in Hamilton on that fateful night in June, 1931. Destruction of the one-time pride among the Colony’s hotels was total.

Actually there seems to have been two fires. The first broke out in some store rooms at the rear of the premises at about nine o’clock on the evening of December 22. The Hamilton Fire Brigade fought it and by 10.40 p.m. it was believed to be completely extinguished. Then, about two o’clock the next morning, two constables on duty outside the hotel heard an explosion within and discovered that fire had again broken out, this time in the quarters occupied by the St. John’s Ambulance Brigade. All efforts to control it were unavailing, and 20 minutes later about a third of the entire structure was afire. A strong breeze from the south and southwest fanned the flames, but fortunately blew them away from the congested section of the city to the south of the hotel. A radical change in the direction of the wind would undoubtedly have endangered the entire city of Hamilton.

Tinder-dry wooden beams, joists and flooring were consumed rapidly, and it was soon clear that there was no hope of saving any part of the building. So the firefighters concentrated their efforts on preventing the spread of the flames to neighboring buildings, from which the tenants had already been evacuated. One other building did catch fire, but the flames were speedily extinguished.

Throughout the dark hours the fire raged out of control, finally dying down around 8 a.m. It continued to smolder for many days after, with sporadic outbreaks of flame. The heavy masonry, weakened by the heat and deprived of supports, cracked and crumbled, and remained a menace to the neighboring buildings. The streets were cordoned off for the protection of passers-by and later barricades were erected to divert traffic from the danger area. However, there were no sudden collapses of walls and no damage was caused in that way. Nor were there any major casualties during the fire, although some of the fire fighters had to be treated for minor burns. 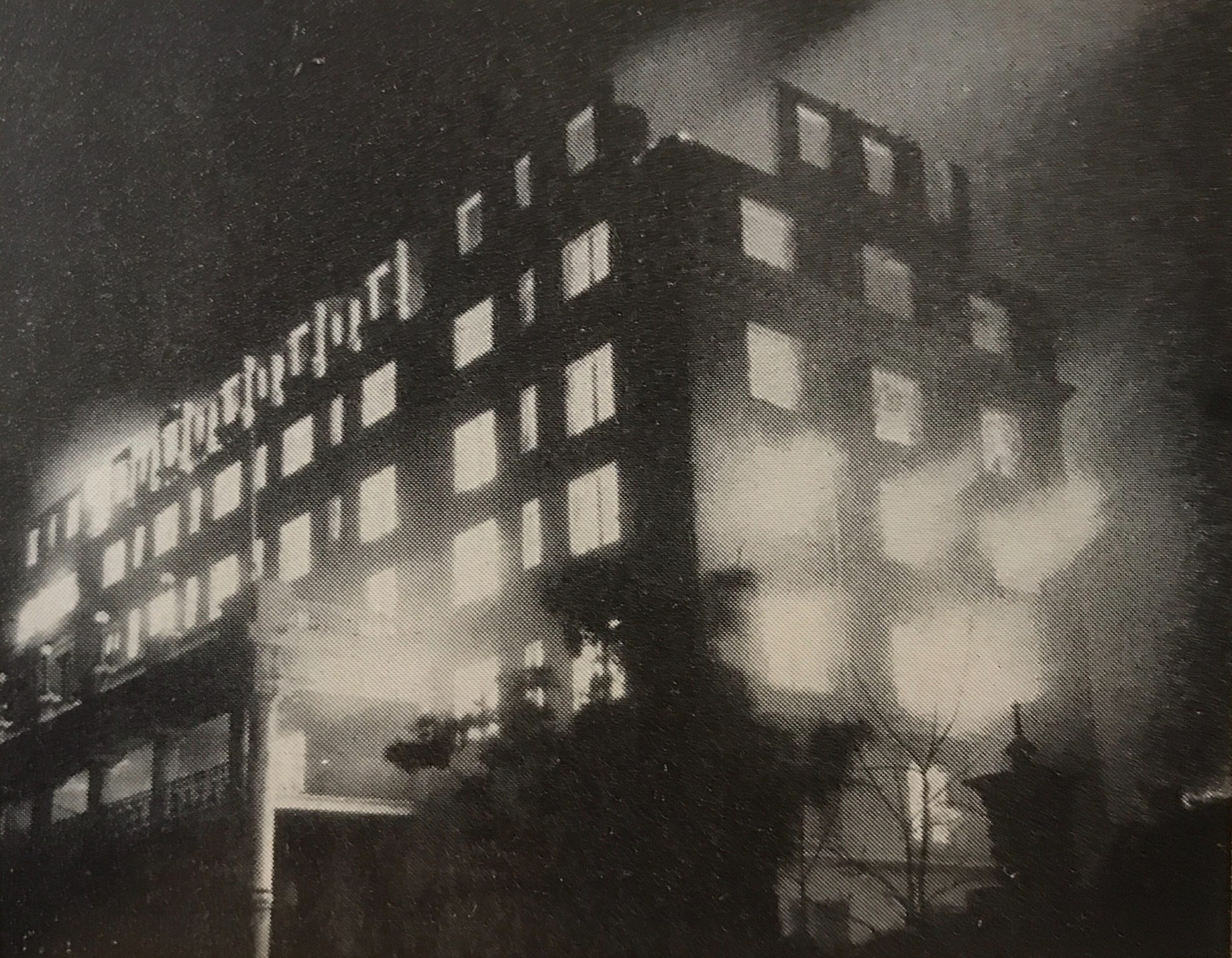 The magnitude of the disaster brought out all available fire-fighting resources in the Islands. To the assistance of the Hamilton Fire Brigade, under Fire Chief Bill Petty, came fire fighters from St. George’s, Kindley Air Force Base, the U.S. Naval Station, Prospect Garrison, H.M.S. Kenya, flagship of the America and West Indies Squadron, and from the British frigates Austell Bay and Mounts Bay. Many employees of the Government offices that had been housed in the Hamilton Hotel, police, newspaper reporters and bystanders, lent a hand with salvaging operations. All worked with a will, and there were some notable acts of courage and daring. However, the absence of overall direction and organization, though more or less inevitable in such circumstances, did not help the situation.

At one point the Hamilton fire siren sounded continuously for five minutes to summon all possible assistance. The glare lit up the sky all over the Colony, and as word of the nature and size of the fire spread, hundreds of people rose from their beds and poured into the city to witness Bermuda’s bonfire of the century. Some business firms located in the neighboring blocks had as much of their employees as they could summon, standing by to evacuate stocks and records should a change of wind cause the fire to menace the city. One or two establishments actually carried out such evacuation. 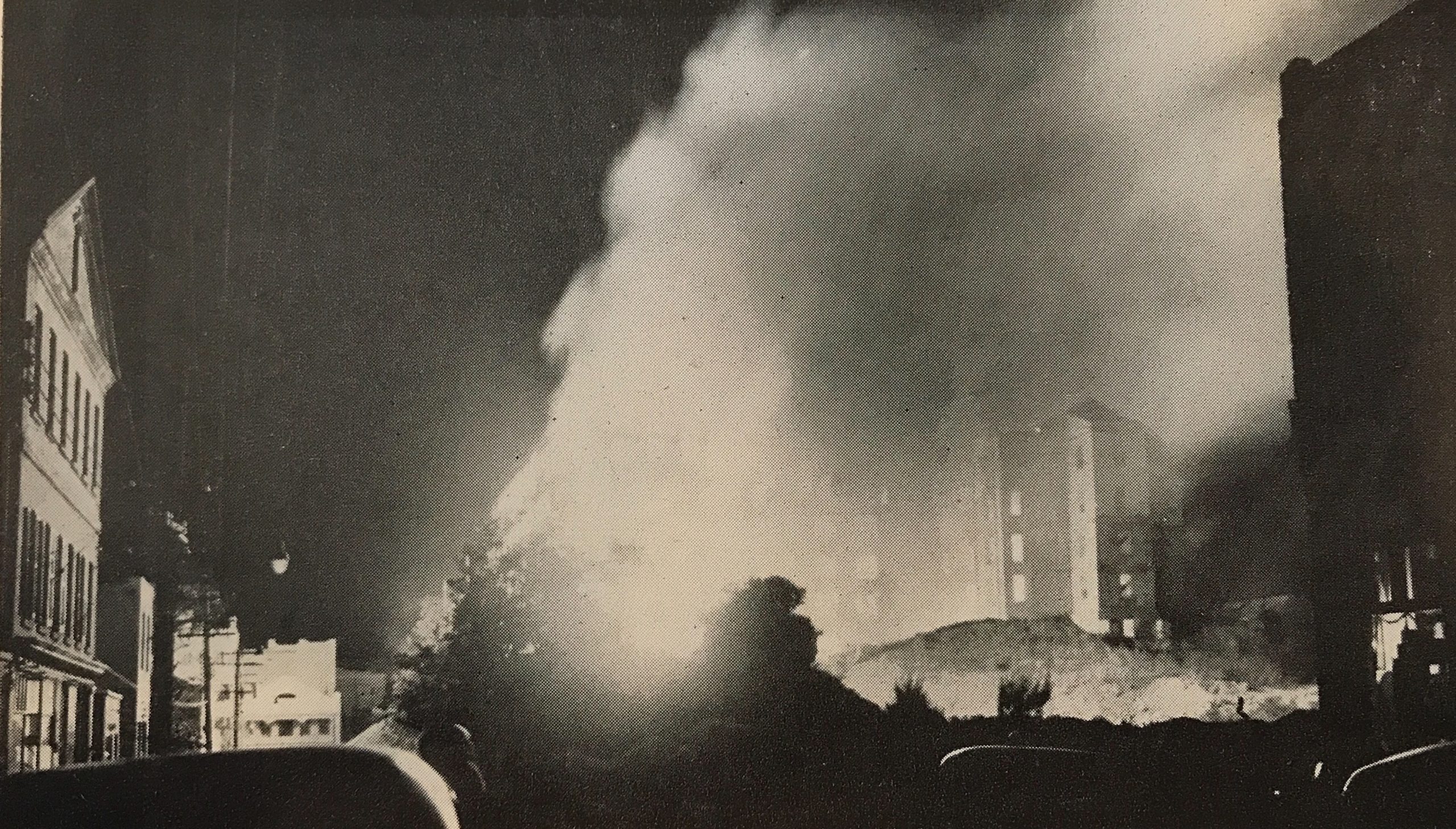 From the doomed building itself a certain amount of equipment and material was salvaged before the fire spread throughout the entire structure, but the greater part of it was lost, chiefly records of various kinds, many of them irreplaceable. The Meteorological Station, housed on the top floor, lost climatological records which had not yet been duplicated. The famous, or infamous “little black box,” the police radar trap for speeding motorists was among the casualties. On the other hand, a surprisingly large portion of the Bermuda Art Association’s display of paintings was saved. Charred and sodden papers—letters, accounts, specifications, all the documentation of government bureaucracy—were blown out of the building by the wind or whirled up beyond the flames by the fierce draughts they created. Next day they lay dismally in puddles of water in the streets.

There were some odd survivals. A posted by the entrance to the hotel continued to invite passers-bys into the smoking ruins to view the exhibition of paintings. A row of frost glass globes on their elegant iron lamp standards on the high balcony still adorn the skeleton of the old hotel. A tall Christmas tree, installed on the grass verge looking down Queen Street a few days before, went on proclaiming its message of good cheer, apparently not even scorched.

Government organizations affected by the fire included the Trade Development Board, Currency & Exchange Control Board, Department of Education, and the Transport Control Board. All faced the problem of finding new quarters from which to operate. Some were hopeful that their safes containing valuable records might have withstood the ravages of the fire.

Estimates of total loss varied between £100,000 to more than £500,000. Radio and other equipment belonging to the Police Force and stored in the building and valued at £6,000 was destroyed.

The Hamilton Hotel was purchased by the Government from the Corporation of Hamilton 14 years ago for £90,000, the price to be paid in yearly installments. At the time of the fire, £50,400 had been paid. The insurers, the Bermuda Fire & Marine Insurance Co. Ltd., admitted liability and about ten days after the hotel’s destruction presented to the Public Works Department a cheque for £50,000, the full amount for which the hotel was insured. It is said to be the largest insurance claim ever paid in Bermuda.

The difficulties to be faced in the demolition of the ruins of the Hamilton are considerable. The Colony lacks the heavy machinery necessary for such a big wrecking job. The Public Works Department considered the task to be “the most ticklish, risky job” it had ever undertaken.

At the time of writing the causes of the fire are still obscure. So complete was the destruction and for so long did the ruins remain too hot to approach, that investigation has been hampered. Some circumstances led to a suspicion of arson in some quarters. A few nights before the fire the building was the scene of violence when an elderly night watchman was knocked out and injured by two men who then proceeded to rob some of the offices.

Early in January the House of Assembly voted £11,500 for the work of demolition of the ruins, and at the same time debated the future of the site. No decision was reached but it appeared to be the feeling of the House that new Government buildings should be erected there.