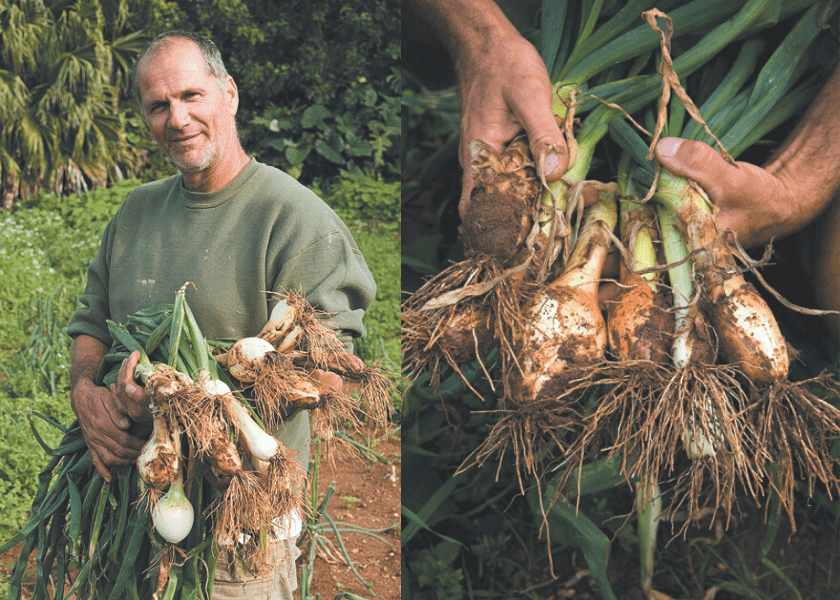 The History of Bermuda’s Famous Onion

Why Bermudians are affectionately known as “Onions” and other little known facts, plus a recipe with rum!

For the last century or so, Bermudians have been affectionately known as “onions.” Consider it fortunate to be nicknamed after so ancient, useful and universally-embraced a vegetable. Imagine being a nation of rutabagas or carrots, or being stuck with the British Navy’s lime stigma, or the Irish potato link.

The onion has been cultivated in Bermuda since 1616. The ardent farmer-Governor Daniel Tucker brought onions to the Island on the ship Edwin and by 1762, the onion was an important export. This was not the sweet Bermuda onion that would bring renown to the Island, but it was a thriving crop. Once sprouted, the onions prove hardy, but the pearly little seeds in the flowering pods were often prey to birds. It was left to the children of slaves to “mind the onion seed”—to walk between the rows of plants waving away the pests with a palmetto leaf tied to a stick. The phrase was commemorated in Nellie E. Musson’s book of the black experience in Bermuda, Mind The Onion Seed.

Fifty acres of onions were under cultivation by 1830. At the time, only two ploughs existed in Bermuda and farming had languished in favor of ship-building. At the end of the decade, Governor William Reid re-invigorated the interest in agriculture, introducing “modern” farming methods that created an industry. During this part of the 19th Century, the first Azorean immigrants came to farm the land. These workers, who would come to make up 10 percent of the population, brought the mild, sweet variety of onion seed, Tenerife, to Bermuda. Then, as now, the seed is set in September, transplanted in December and pulled in March and April. The subtropical climate and rich soil conspired to produce a singular vegetable.

More than 330,000 pounds of onions left Bermuda in 1843. Ten years later, the virgin voyage of the Bermuda-built Pearl left port with 134 barrels and 1,640 baskets filled with local onions. In 1875, 4,000 tons of onions were exported. Potatoes, sweet potatoes, arrowroot, “garden” vegetables and onions made up the market basket of exports.

Onions were even used to promote tourism. An old greeting card from Bermuda once cryptically stated: “Blessed is the man who comes to Bermuda (the modern paradise) and is tempted to eat the sweet onion instead of a forbidden apple.”

Tiny Bermuda soon became an agricultural force to be reckoned with. During the early decades of this century, Bermuda was known as the “Market Garden of New York City.” But, in Bermuda, Texas, an onion knows as Texas 1015 was being cultivated. Similar in shape, mildness, and growing season, these would become the generally accepted “Bermuda” onion. In 1930, to protest this vegetable and other farming interests, the U.S. enacted the Smoot-Hawley Protective Tariff on imported produce and the Market Garden soon closed for good. In 1920, 109,072 bushels of onions were exported; in 1930, 10,937, and by 1937 a mere 1,603. It’s believed the onion’s cultivation began in the Mediterranean, or in Iran or Afghanistan. Although we may consider the onion commonplace today, the vegetable was a powerful totem to the ancient Babylonians and Egyptians. They believed one could travel in a circle for eternity; the onion, with its many concentric circles, came to symbolize perfection and immortality. Part of the ritual of mummification included a bouquet of onions, swaddled like a miniature mummy, placed in the folded hands of the dead as an afterlife aid. Even though the great Cheops pyramid was said to have been built on the endurance of slaves fed on onion and garlic, the exulted bulb eventually became so sacred, high priests forbade its use for general consumption.

In the Greek and Roman world, the onion was universally enjoyed. Horace, Xenophon and Pliny all paid tribute to the onion. In Remedia Amoris, The Book of Love, Ovid recommended the onion’s aphrodisiacal powers. The lustful Emperor Petronius suggested a dish of onions and snail heads without sauce to revive flagging desire. And the poet Varro, in the First Century B.C. corroborated his predecessors by declaring the vegetable should “be eaten boiled in water by those who seen the door to love.” In his 1542 Dietary of Helthe, Andrew Board wrote: “Onions promote a man to veneryous acts, and to somnolence.”

In the more modest 17th Century, onion juice was used to treat burns, and a concoction of boiled onion mixed with sugar and butter was suggested to cure a cough. Today, the onion’s ability to combat colds and infections is widely recognized—as is its link with lower cholesterol, blood sugar and fats. Onions are also considered an effective treatment for bee stings, and good for lucid thinking, creativity and memory.

The onion, like Easter lilies, garlic, leeks and shallots, are all in the same allium family. Although an immense variety of onions exist, the differences are slight; colors vary from stark white to warm yellow and brown to shiny purple red; the shape from round to flattened to the elongated florence. The most common are the globe and Italian red onions (available all year), yellow Spanish onions (found in August through April), and sweet onions (best of all) which are restricted to a few months of spring.

As a rule, the warmer the climate, the milder the onion; the more harsh the growing conditions, the more intensely pungent the flavor. Indeed, some say the onion is a long-range weather forecaster. In France, pundits insist: “Quand oignon a trois pelures, hiver aura grande froidure”—when the onion has three skins, the winter will be very cold. The French produce nearly 150,000 tons of onions a year, mostly in Provence, and import five million tons. It follows, in France, if your fashion statement is the layered look, you are said to be “vetu comme un ognion” (dressed like an onion).

It’s hard to imagine a savory dish in which the presence of the onion would be unwelcome—boiled, sautéed, scalloped, baked, roasted, barbecued or raw, on burgers, in salads, soups, stews, casseroles and stuffings, in bean and grain dishes, chutneys, as a tart, in tomato sauce or on a pizza. After salt, gourmands agree, the onion has to be one of the most valuable seasonings.

Directions:
Boil the onions in a salted water until they are tender but still somewhat crisp. Drain well.
In a heavy-bottomed pot, heat together the butter, honey and rum and cook for about five minutes. Add the onions and cook until well glazed.