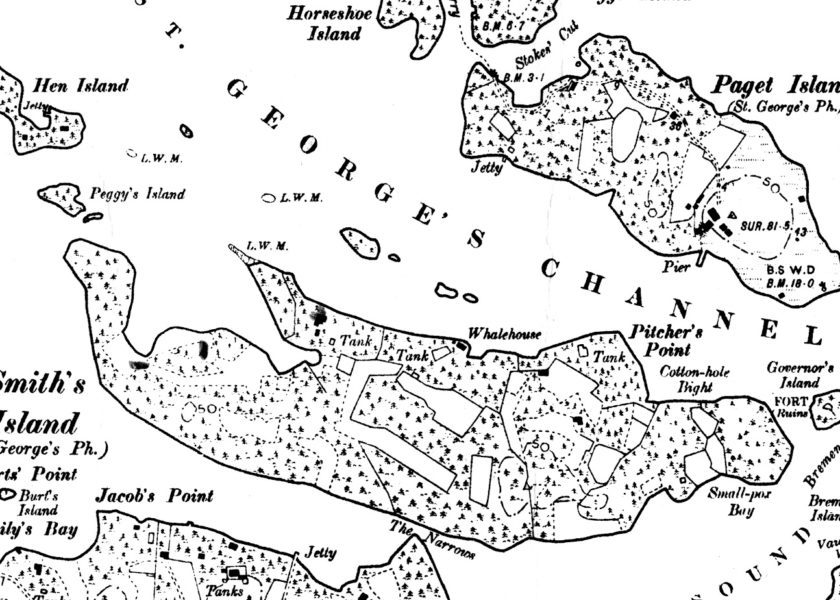 Smith’s Island is an unassuming, often overlooked land mass in St. George’s Harbour. Though it is sparsely developed today, it was the home of the very first Bermudian settlers – those few men who stayed behind while the Sea Venture continued on to Jamestown. Recent archaeological research by Dr. Michael Jarvis is taking a closer look at the historic island.

Wrecked On Bermuda
The passengers on the Sea Venture, the ship that settled Bermuda in 1609, were bright with optimism – they heard that the New World could bring them fortune and prosperity. They were also eager to leave England for other reasons – most of them were criminals. But being part of the new colony was risky business, since the settlers at Jamestown suffered famine, disease, and relentless slaughter by the Native Americans.

Though the English tried to keep such grave reports under wraps, it’s likely that the colonists had some idea that their task would not be an easy one. When the Sea Venture wrecked on Bermuda’s shores in 1609, they found plentiful food in the form of docile cahows and turtles, and, further, no native people to bother them.

Those leading the colonists, Sir George Somers and Sir Thomas Gates, urgently made preparations to move on and help the starving colonists already at Jamestown, but not everyone was so eager to leave.

Mutiny
Men under the command of James Want caused trouble for the temporary settlement – they refused to work and tried to set up their own camp elsewhere, saying that the future was bleak in Jamestown. Eventually, however, Gates threatened them with banishment to an islet without water, and they fell in to line. Was this distant island what we now know as Smith’s Island?

Another group of men, including Edward Waters and Christopher Carter, with some of the men who had left the group before, hatched a plan to kill Gates in order to prevent the group’s travel to America. Though they never succeeded in their murderous inclinations, Waters and Carter managed to remain in Bermuda as the rest sailed on to Jamestown.

Sir George Somers came back to Bermuda after ducking out of the whole situation at Jamestown. While Gates felt a sense of responsibility to see the colony thrive, Somers saw the starvation and war the colonists experienced, and decided to return to Bermuda, where he died. At this time, Edward Chard elected to stay in Bermuda with the two castaways, along with the ship’s dog.

Why Did They Choose Smith’s Island?
Smith’s was close to the reefs on North Shore, which would have been optimal for fishing. Town Cut was the main route by which ships would enter Bermuda, and they could monitor Town Cut from Smith’s in case any unwelcome visitors arrived. It was also close to St. David’s, another quality watch post, at that time called Strachey’s Watch.

What Did They Do There?
The men referred to themselves as “lords of the islands,” and spent time creating a self-sustaining camp and exploring. They created a one-acre farm growing corn and pumpkins.
Later, the men planted wheat, beans, tobacco and melons. They also prepared turtle meat, and salted hog flesh from the hogs that a Spanish explorer had let loose on the island as a food source years earlier, in case he were to return.

Archaeologists attempted to find the site of their household on Smith’s Island, and though there are a few possible sites, nothing has been confirmed. The site the archaeologists think may fit the bill has a very large hearth and evidence of a large house, as well as flattened land good for farming, which Carter, Chard, and Waters certainly did.

Discovery of Ambergris
The men found a huge quantity of ambergris washed up on the shore during their settlement. The discovery of this valuable material would go on to convince the English that Bermuda was a valuable island full of ambergris commodity, worthy of sending more ships and settlers. Ambergris, which is basically whale throw up, was used in the manufacture of luxury perfumes and fetched a hefty price.

For Carter, Chard, and Waters, the ambergris was a point of contention. Various fights broke out between Chard and Waters over it, including once when their dog bit them mid-fight. Carter, meanwhile, hid their weapons to prevent any regretful actions.

When the first group of deliberate settlers reached Bermuda, including the first Governor Richard Moore, Moore heard of the ambergris and seized it. The settlers first set up a town on Smith’s Island, but wouldn’t stay here long, and soon Moore moved the settlement to St. George – Carter, Chard and Waters left too.

Smith’s Fort
The Governor quickly constructed a few forts near Smith’s Island to overlook the channel for incoming ships, including one on Governor’s Island called Smith’s Fort. This was the fort that was outfitted with cannons from the Sea Venture wreck. Those who manned the fort would have likely lived in the structures already established on Smith’s Island, so the houses continued to be maintained.

Whaling
In the 1660s, Smith’s Island was home to a whaling operation. Today, you can still see the structure on the coast – a slab with huge circular vats in it. Whales were flensed here and their meat was boiled for whale oil.

In the 1800s, the East End Whaling Company also had a tryworks on Smith’s Island when the industry became more regulated.

Native American Slaves
Smith’s Island was occupied by the Asser family, and then the Sharpe family – and the Sharpes had a family of Native American slaves with them, though the Sharpes seemed to live in poverty as indicated by inventory records. The slaves may have gone on to live on the island by themselves, or perhaps displaced to St. George or St. David’s.

Archaeologists hypothesize that a site called ‘oven site,’ which has a feature that was probably an oven, carved out of the limestone and with ash above, may have been Boaz Sharpe’s house. Evidence to this conclusion includes chert fragments found on the site suggest that the presence of Native Americans, and the fact that few objects were found, suggesting an impoverished household.

Quarantine
Another important piece of history at Smith’s Island was its use as a quarantine island. A house there may have been used for patients of a controversial new medical procedure – variolation, which exposed people to disease in a controlled way in order to give them immunity; the precursor to vaccination.

In 1816, it was certainly a quarantine post, where incoming ships with infected passengers would dock and have to be examined by a physician before being granted access to the mainland.

For more information about the Smith’s Island archaeological dig, check out Dr. Michael Jarvis’ blog, and his report on the work in 2012, from which most of the information in this article is summarized.