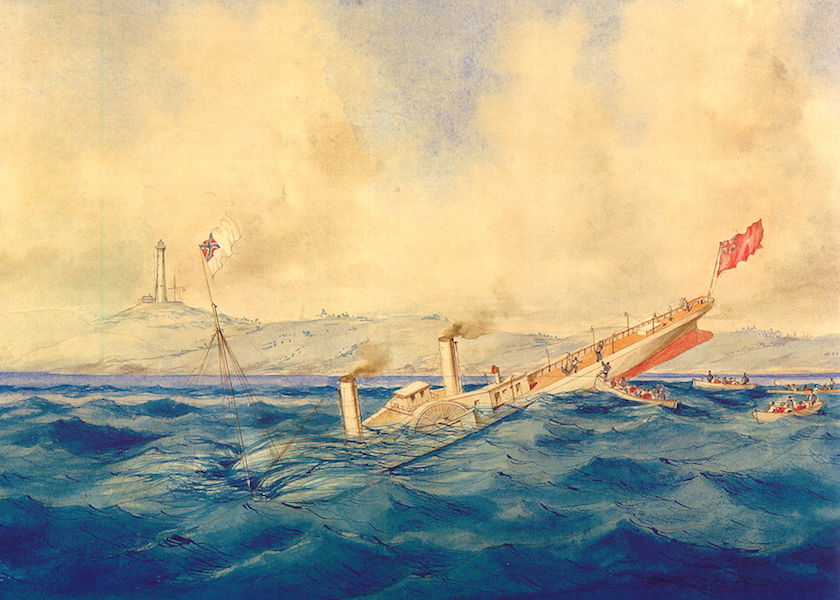 The sinking of the Mary Celestia by waterolourist Edward James. From Shipwrecked by Gordon Payne Watts Jr.

The History of the Mary Celestia Shipwreck

Did the Mary Celestia sink because of a marine pilot’s incompetence, or because of his sympathies towards the American unionists? The Marie Celestia has a lively military past, running contraband through unionist naval blockades. The ship has also recently been studied by marine archaeologists, revealing the human stories of the crew on board.

Historical Context
The American Civil War saw Abraham Lincoln’s governance abolish slavery in the U.S. In the throes of the war, the union states, or the north, undertook military action against the south, more commonly known as the confederacy, which supported the continuation of slavery.

During the war, the union states constructed a blockade using their naval fleet, stretching from Maryland all the way to the Gulf of Mexico. In this way, they hoped to cut off the south’s access to provisions, guns, and ammunition from abroad and force a surrender.

However, the confederacy captained a series of blockade runners, fast boats that could break through the blockade and collect provisions from Bermuda, Cuba, and the Bahamas. The confederacy was exchanging cotton for guns and ammunition, and they used Bermuda’s port in St. George to do it.

The war was an economic opportunity for Bermuda, as we were one of the only ports available to southerners to smuggle in items for the war effort. As a UK-controlled colony, we were officially neutral towards the war – but behind closed doors, the UK and Bermuda were sympathetic to the confederacy.

Though slavery had been abolished in Bermuda about 30 years before the American civil war broke out, many people were still openly sympathetic to the rebel cause. What’s more, our island benefitted greatly from the influx of southern business – the maritime economy was booming, and UK officials turned a blind eye.

Blockade Runner
The Mary Celestia was a blockade runner, and was only two years old at the time of sinking. The ship would have made regular trips between Southern ports, slipping through the union’s blockade, Bermuda, and the port at Nassau. Its top speed was about 17 knots, and it successfully outran union ships while carrying its loads.

The ship had just loaded up with a heavy cargo of food, ammunition and rifles, (categorised as general merchandise to stay incognito) but it struck a reef just a few hundred yards from Bermuda. The ship sank in eight minutes.

At the time of sinking, the Bermudian pilot, John Virgin, was driving the boat, not the ship’s captain Arthur Sinclair. This was common practice, as it was safer for captains to let local Bermudians with knowledge of the reefs navigate the dangerous inshore waters.

The first officer on the Mary Celestia warned Virgin that he was getting too close to the rocks, but Virgin replied, “I know every rock about here as well as I know my own house.” Some believed that Virgin was simply arrogant, but others suggested he had taken a bribe from union officials in Bermuda to sink the vessel on purpose so that its cargo would never reach the confederates.

What Happened After it Sank?
Only one life was lost – the cook apparently had rushed back to his quarters as the ship was sinking to retrieve an item that was important to him, but he was trapped as the ship went under.

Local Bermudians, who rowed out to the ship before it sank, retrieved most of the ship’s cargo.

Archaeology
In 2011, marine archaeologists had a closer look at the Mary Celestia, and excavated about 3 feet of sediment that had covered the ship’s bow and some features. You can see the ship’s bow, paddlewheels, and boilers, encrusted with vigorous coral growth. The paddlewheels look like little ferris wheels, lying on the ocean floor. You can see a 3D model of the ship here.

The same archaeological dig that revealed the bow also uncovered bottles of perfume and unopened wine. The wine was stashed out of sight of the captain, which suggests that the crew was involved in the illegal wine trade, as well as its support of the confederates.

The ship was powered by high quality smokeless coal so as to avoid detection during its blockade runs, and the lumps of coal can still be seen on the bottom.