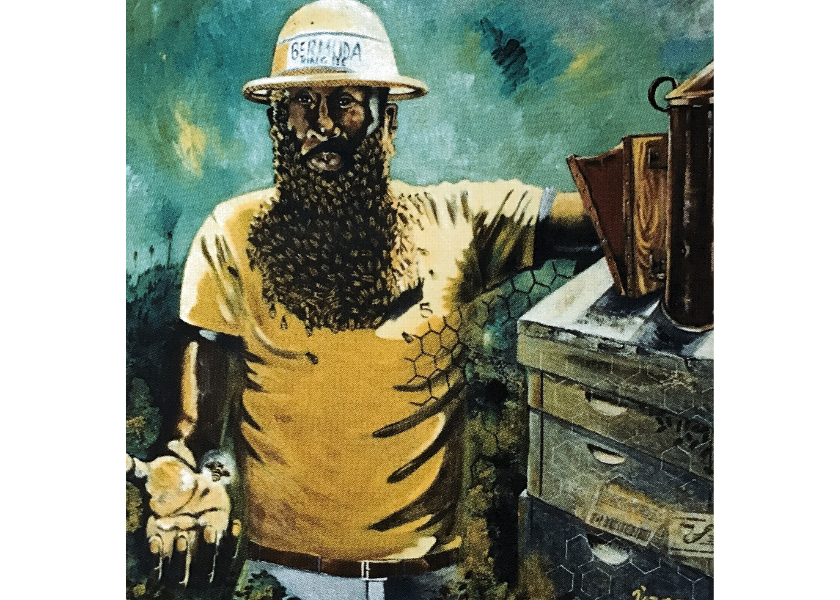 Portrait of Furbert wearing his beard of bees by Vernon Clarke.

The Land of the Bees and Honey: The Sweet Life of Beekeeper Randolph Furbert

This article was taken from our archives. It originally appeared in the August 2004 issue of The Bermudian. It appears here exactly as it did in print originally.

Appropriately painted a warm honey yellow and white trim, Bee House on Fractious Street, Hamilton Parish, is certainly a hive of activity. This is where Randolph Furbert, Bermuda’s top beekeeper and bee educator, spins and stores his honey, makes his wax crafts, runs his office and gives his bee talks and tours. His office is a treasure trove of bee-related posters, pictures, crafts and mottos. “Bee busy, bee kind, behive yourself,” one poster decrees, while another gives a new take on the “beeattiudes”: “Blessed are the honey bees for they pollinate our crops, produce our honey and are fascinating to watch.”

He proudly displays his 2003 Queen’s Certificate of Honour, as well as innumerable photos of his travels, taken on beekeeping business. A member of four beekeeping associations, including the Apimondia — the World Congress of Beekeepers — which meets in a different country every two years, he’s travelled to many countries, including China, Australia, South Africa, Nigeria (where he taught beekeeping) and Israel. A cabinet in his office holds his souvenirs, jars of honey from all over the world. He has also visited Sir Winston Churchill’s garden at Chartwell, which so impressed him he named his house and apiary after it.

But what started his love for bees? “I was brought up on a farm in Hamilton Parish,” he explains. “My father kept bees so that we had sweetness, honey on the table.” That was during World War II, when rationing meant sugar was hard to come by. But it was in the early 1970s when he decided to follow his father’s example. “I had three hives, and the first year they yielded 30 gallons of honey. I was so excited I decided to invest in beekeeping as a sideline.” (Until just a few years ago, he owned and managed his own trucking business). Since then bees have been an important part of his life. “I keep them for pleasure,” he says. “And for profit. They don’t need payroll tax or health insurance. They never call in sick, and they work until they die! And they’re the only animals to manufacture food for humans.”

We all benefit from bees, he says firmly, not only because of the honey they produce but also because of their cross-pollination of plants. In addition to and even more valuable than the honey is the beeswax, which is used in all sorts of ways — for crafts, for polish and, of course, for candles. “Mankind’s first electricity,” Furbert says with a laugh.

While the bees, the worker bees anyway, work very hard at a variety of activities (feeding the queen and the nursery, collecting pollen and nectar, producing the wax), so do Furbert, his wife, Gail, who sells the honey from their home, and the young men he has trained to help over the years. “I’ve trained five,” he explains. Brothers D’jaun and Donovan Seymour, Sergio Virgil and Andre Jackson are now adult students, while Blake Somner, aged 14 has been helping since he was 11. All have spent many an hour with Furbert painting the supers, cutting and assembling the frames and, during harvesting time, lifting the very heavy boxes.

April and May are critical months because at this time of year bees get on the move, and swarms are a mina source of bees for his hives. In fact, one swarm last may received front-page news coverage when thousands of buzzing bees descended in to the basket of a livery cycle parked on Queen Street. Furbert’s assistant D’jaun prevent the bees’ extermination. He took them away in a bucket, and now, as Furbert says, they have a ‘nice address” in Paget.

Aren’t swarming bees frightening? “No,” he says firmly. When bees swarm, they’re looking for a new home. They’re not defending their hive, so they’re not interested in stinging. The bees on Queen Street were just resting. D’jaun managed to removed them by taking the queen. Once the queen goes, all the other bees follow.”

During these months, Furbert frequently gets calls for help. Right now he has 150 hives all over the island from St. George’s and the former base lands to Somerset. “I have too many and not enough,” he says, laughing. He chooses places for their proximity to flowers and for their relative isolation. One of his favourite sites is an old quarry in Hamilton Parish, at the top of White Crest Hill. “My father was a stone cutter,” he remembers and points to the cut marks on the limestone rock face. As he tends to his hives here, he can let his mind drift back to the old, more rural, more natural Bermuda.

Of course, there’s an agreement with the residents of the properties. If the bees make honey, the residents get honey — a harmonious arrangement altogether. This year, however, honey may not be plentiful because of the damage wrought by Hurricane Fabian. In fact, the storm destroyed most of the hives Furbert had at the back of Bee House. And a Pride of India tumbled in the storm (“Too much pride,” Furbert says wryly). But his banana patch is flourishing — good news for the flower-loving bees. 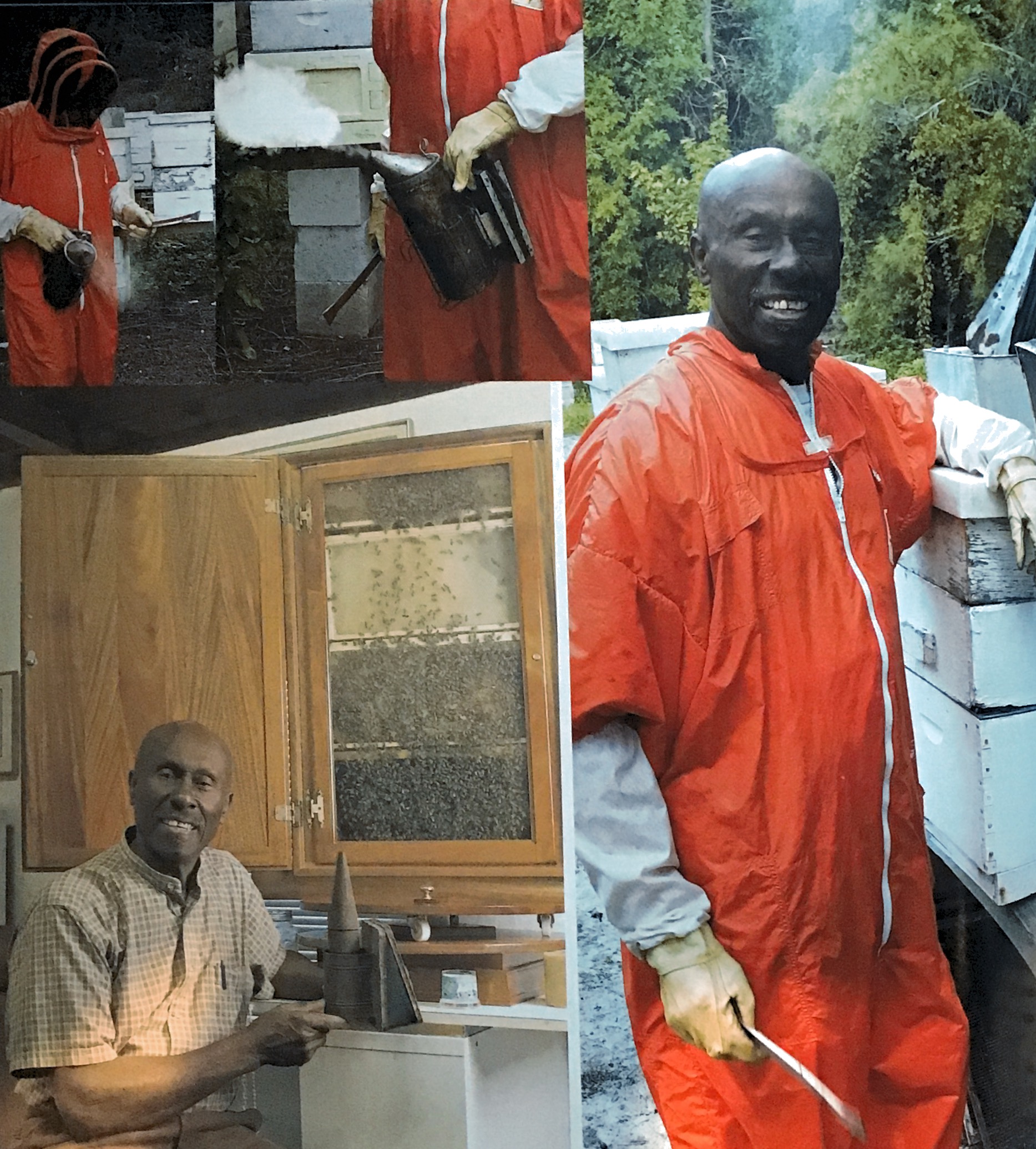 Furbert is 70 years old now, and he’s thinking of his bees’ future. Who will eventually take them over? Perhaps the answer to that question lies in the hands of his sons, John and Paul, daughter Heather, and grandson Aaron, who, at 10, is already helping by labelling the jars.

As al over of nature, Furbert expresses some concern over the amount of building on the island. Bees and flowers need their space, too. He has no plans to stop travelling. His next destination? Possibly the Caribbean for a beekeepers’ congress. And in November, South Africa.

Randolph Furbert is not the first beekeeper in Bermuda. Actually, the first European bees to arrive in the New World came to Bermuda in 1616 as a gift for Robert Rich. But at the Agricultural Exhibition in 1987, Furbert was the first beekeeper in Bermuda ever to wear a beard of bees. A newspaper photo on his wall depicts him standing utterly still, a myriad of bees covering the lower part of his face, neck and chest. The stuff of nightmares? Not for him. “I wanted to prove to people bees will only sting if they feel threatened.” He managed the feat by holding he cage containing the queen bee to his chin — “She omits an aroma which attracts the other bees” — and he kept the creatures calm by emitting a clear white smoke into their cage and giving them sugar syrup before letting them fly to his face.

When well-known artist Vernon Clarke visited Bee House, he was so impressed by the story and Furbert’s knowledge that he painted a portrait of Bermuda’s “King Bee,” complete with bee beard. Now the painting, which incorporates wax as a painting medium, takes pride of place on one of Furbert’s office walls.

A spoonful of honey may make the medicine go down, but it takes a lot of work to make that spoonful — no less than the six-week life span of 12 worker bees. “A bee in its lifetime makes just one-twelfth of a spoonful of honey,” he explains. “And to make one spoonful the bees have to visit 4,000 flowers. So you need a lot of bees to make that 16 ounce jar of honey.” That’s why he’s happy when he sees each queen in his hives surrounded by hundreds of courtiers who feed her and, he says, smiling, “polish her nails.” He points to one of his queen bees, distinguishable by her longer abdomen and blob of colour. “I imported her from Hawaii. Hawaii is free from diseases attacking bees. She could live for two or three years and during that time lay about a million eggs. That means 1,500 to 2,000 eggs a day.”

Honey is always special. After all, it is the food of the gods, and it does have a measure of immortality. It never goes bad and so can last thousands of years. Honey from the time of the Pyramids, for example, still exists. But Bermuda honey is extra special. We all know that because it tastes delicious. But why does it taste so exquisite? The answer lies in our flowers. Bermuda’s top beekeeper says we have such a variety of plants and flowers that our honey tastes unique.

So where, as Shakespeare almost put it, does the bee suck? Well, environmentalists may worry about one of the island’s most prevalent invasives, the Brazilian or Mexican pepper, but bees don’t. They love its flowers. According to Furbert, about a third of Bermuda’s honey is thanks to the bees’ liking for Mexican pepper. They are also very keen on the fiddlewood, another invasive with fragrant flowers. But when we taste our honey, we also taste the nectar of lantana, citrus, bananas, fennel and nasturtiums. We associate honeysuckle, of course, with bees. But what about broccoli, pumpkins and cucumbers? Bees love the flowers of those vegetables, too. “What we need now,” Furbert says thoughtfully, “is a good filed of cucumbers.” And rain. “Drought is never good for bees.”