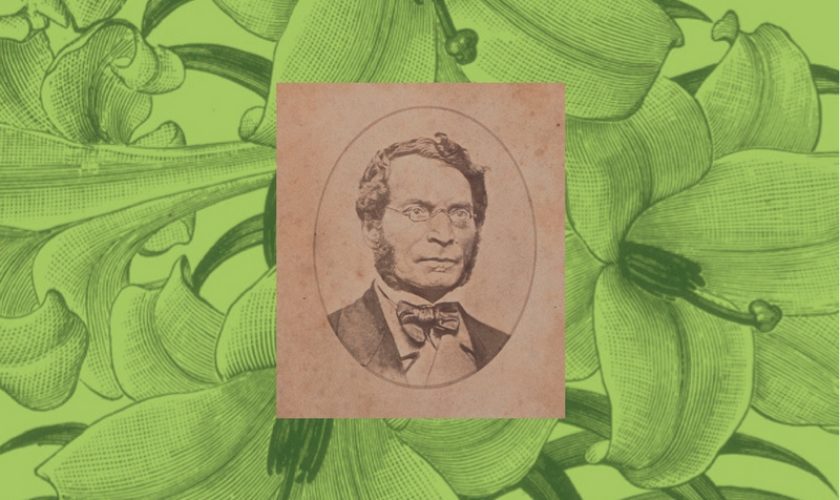 The Missionary and the Easter Lilies

More than eighty years ago, a story first appeared in print about the origins of the famous Bermuda Easter lily. The tale, told to writer Louisa Smith by a member of the Outerbridge family, has all the hallmarks of a compelling piece of fiction. A mysterious visitor, we are told, a missionary on his way home to England from Japan in the 1850s, put in to St. George’s during a perilous sea voyage. He returned the islanders’ hospitality with an unusual gift—the bulbs of an exotic flower, from the distant and little-known land of Ryukyu (modern-day Okinawa, Japan). The flowers became fashionable, and eventually the cultivation of the Easter lilies proved to be a profitable industry, and an iconic symbol of the islands.

The story of the missionary and the lilies has been accepted and passed on by many historians and horticulturalists, but numer­ous versions have surfaced over the years, each differing slightly from the last, and there are many holes in the narrative—we are never told the missionary’s name or how long he stayed, and the year of his arrival changes depending on the writer. It all sounds more like folklore than reality, but readers may be surprised to find that it is supported by real, historical facts.

Bermuda, with its harbours and dockyards, and splendid position between Canada, the West Indies and the United States, was a natural refuge for sailing ships in distress. Thus it was, on Saturday, February 17, 1855, that the Sophia Burbridge, having changed her planned route from Hong Kong to Ham­burg after being badly damaged in a storm, put in to St. George’s for repairs.

The ship’s arrival was nothing out of the ordinary for the people of Bermuda, but it changed the lives of her five passengers—a family by the name of Bettelheim. Dr. Bernard Bettelheim was an Anglican medical missionary, an accomplished linguist and a man of wide interests who collected botanical specimens and other curiosities. He and his family had spent eight years (1846–54) living at his mission station in Ryukyu, and they now arrived at Bermuda during what was intended to be their journey home to England.

Dr. Bettelheim spent nearly a month in Bermuda, but next to nothing is known about what he did there. Having spent the last two years reading and writing about his life, however, we are convinced that he is the mis­sionary who appears in the story of the Easter lilies. He was the first Protestant to establish a mission in Japan, and he is certainly the only missionary who is known to have made the detour to Bermuda while returning home in the 1850s. Therefore, if the story of the mis­sionary and the lilies is true, Bettelheim is the only man who fits the bill. Before we get ahead of ourselves and declare the mystery of the first Easter lilies solved, however, we must examine the story, and our evidence, more closely.

During his stay in Bermuda, so the story goes, the missionary met the postmaster, James Thies, and an old college friend, the Reverend J.A.J. Roberts, to whom he gave some bulbs taken from a Japanese lily, Lilium longiflorum. Roberts, a keen gardener, planted them at his rectory in Hamilton, and Thies planted his in St. George’s, thus establishing the species in Bermudian soil. In some versions of the story, we are told that the plants flowered in time for Easter—hence their popular nickname.

The timing of Bettelheim’s visit certainly fits this narrative. He was in the islands from late February to early March 1855, so if he did give lily bulbs to some of the islanders, they might have bloomed just in time for Easter, which fell on April 8th that year. It would also have been natural for Bettelheim, whose social standing as a doctor, a preacher and a scholar would have brought him to the attention of local officials and clergymen, to meet and exchange gifts with the likes of Roberts and Thies, who were both in Bermuda when he arrived. It is unlikely, however, that he and Roberts were old college friends. Bettelheim was around eight years older than Roberts. He was also a foreigner (originally from modern-day Slovakia), and had studied medicine in the universities of central and southern Europe in the 1830s. By the time Roberts, an English­man, graduated from Cambridge in the following decade, Bettelheim had already left England for the Far East. 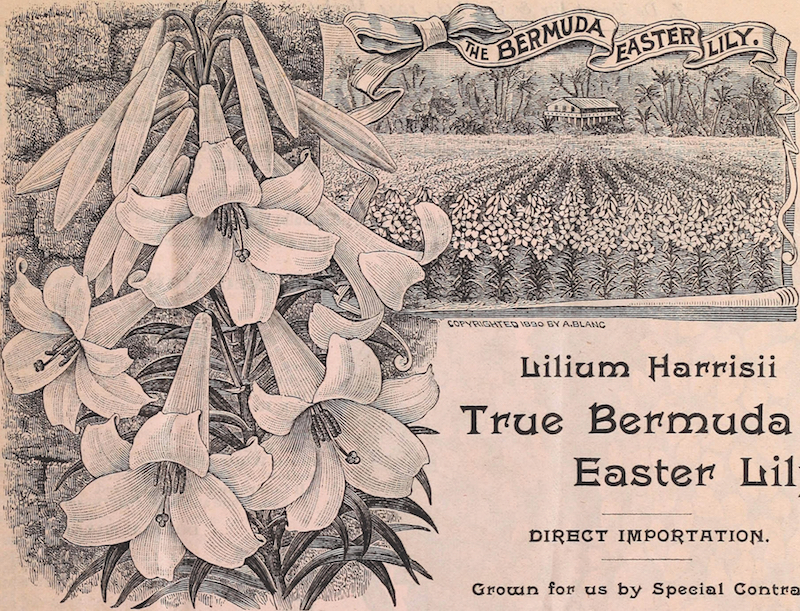 While our issue with Roberts is trivial, the alleged involvement of the wife of Governor Sir Charles Elliot requires more serious attention. Some writers have claimed that, soon after the lilies appeared in Bermuda, Lady Elliot acquired some bulbs for herself, planting them in the grounds of Government House. Through her endorsement, the lilies are said to have been introduced to the Bermudian elite, making them fashionable and popular. At the time of Bettelheim’s arrival, however, she was no longer in Bermuda. She had left the islands in 1854 with her husband, who was now serving as gov­ernor of Trinidad. Therefore, if the story of the missionary and the lilies is true, and Bettelheim brought the bulbs to the islands in 1855, then Lady Elliot cannot have been involved.

Bermuda was a busy port, and the lilies had been exhibited in Europe as early as the 1830s, so it is possible, though unlikely, that someone other than Bettelheim could have introduced them. The earliest documented picture of the lilies in Bermuda is dated April 1856, so they must have arrived before then. Some say they were brought by a soldier on leave from Malta. Others have suggested that it was the noted agriculturalist Governor William Reid. None of these alternatives, however, is as compelling, or as convincing, as the story of the missionary.

What is it, the reader might ask, that sets this story apart? Our answer: hard evidence. Bettelheim did not leave a journal of his time in Bermuda, but he did write extensively while living in Ryukyu, and it is in these writings that we find many references to his interest in, and acquisition of, the local plant life, including the lilies. Though they are often said to be of “Japanese” origin, the lilies are actually native to the group of islands, the Ryukyus, where Bet­telheim had lived and worked as a missionary.

Sure enough, within days of his arrival there, he wrote, “One of the natives brought me some very splendid lilies of a very large size & exquisite fragrance.” He had the flowers taken home to his wife, Elizabeth. We can never know for sure, but we think it highly likely that Mrs. Bettelheim, impressed (as her husband was) by the remarkable lilies, cultivated them in the grounds of their mission house, producing the bulbs which would later be taken in the family’s luggage when they left Ryukyu in 1854, remaining with them during their long and ar­duous voyage from China, through the Indian Ocean, around the Cape of Good Hope, and eventually, across the Atlantic to Bermuda, even surviving near-shipwreck along the way—a happy accident for the lilies, which would thrive in the Bermudian climate.

Dr. Bettelheim did not stay in Bermuda long enough to see the lilies being cultivated there. The interruption of his original voyage from China to Europe had given him pause to reconsider his plans. He left the islands on Tuesday, March 13, 1855, on a ship bound for the United States, leaving the rest of his family behind in Bermuda for a further six weeks while he decided what to do next. Mrs. Bettelheim and the children would, therefore, have spent Easter with their new friends in the islands, where they may even have seen the first lily flowers come into bloom. On April 23rd, their stay in Bermuda finally came to an end, and they left to join Dr. Bettelheim in America.

Bettelheim was, in many ways, a restless man, unwilling, as was often shown throughout his life, to adhere for long to any particular faith or flag. He had come to Bermuda as an Anglican and a British subject, but soon after arriving in the States, he shed both of these allegiances and decided to stay. The family never returned to England, and remained in America for the rest of their lives. Bettelheim would go on to become a Presbyterian pastor and a citizen of the United States, and would even serve on the side of the Union during the Civil War.

Both before and after moving to America, Bettelheim had an eventful life. He was a risk-taker and always aspired to achieve great things, often getting himself, and those around him, into trouble along the way, but by the end of his life in 1870, he had failed to leave any lasting mark on the world—or so it seemed. If his part in the story of the missionary and the lilies is true, as we believe it is, then his long-term legacy is impressive indeed. Who else could claim to have had such a powerful impact on the economy and culture of what would come to be known as the “Easter Isle,” one which is commemorated to this day in the annual presentation of Easter lilies to Her Majesty The Queen?