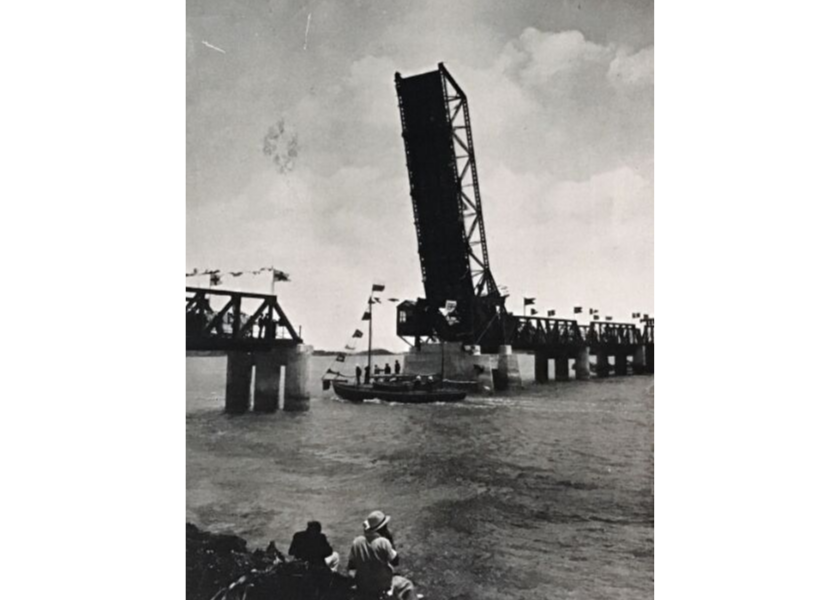 The Opening of the St. David’s Island Bridge: July 1934

This article was taken from our archives. It first appeared in the July 1934 issue of The Bermudian. It appears here exactly as it did originally.

St. George’s had a gala day with pageantry, in showing honour to her patron saint, and following closely upon this, the East End celebrated another event of significance, the opening of the St. David’s Island Bridge.

Sir Stanley Spurling called upon the Governor to open the bridge, prefacing his request with a tribute to the St. David’s Island sea adventurers of former days.

His Excellency in replying was in clever humour, naming it the Severn Bridge as a reflection of the similarity of relationship between St. David’s and St. George’s in comparison with England and Wales; he also remarked:

This ceremony today seems to me to be a long overdue celebration of matrimony between St. George’s and St. David’s. I’m not quite sure which is the bridge and which is the bridegroom, but I have here emblems of both and I present them to the chairman of the parish vestry, and ask him to solve that muddy problem.

Then, with ceremony, His Excellency handed Mr. Percy Tucker two roses and a leek, which Lady Cubitt produced from a bag she was carrying. Mr. Tucker, conveying the thanks of the vestry to His Excellency, spoke of the beauty of the island; of its rich soil and agricultural possibilities; he emphasized also the possibilities there for riding and expressed the wish that the St. David’s people would not only allow but encourage equestrians through the paths and trails of the island.

It was fitting that Miss Patty Hayward, delightful lady, should have been present, since Miss Hayward is St. David’s oldest inhabitant, ninety-two years of age. It was chiefly by the thought and persuasion of a distant relative, Mr. Will Zuill, that her natural diffidence was overcome, and so, with dignity and graciousness, she met the Governor and his party at the swingbridge and was escorted by him to the ceremony. Of interest also is the fact that Miss Hayward lives in the Bay House, and the deed of this property bears still the seal of the Bermuda Company, the impress of a contract which today is nearly three hundred years old.

Now that St, David’s and St. George’s are joined, there are many regrets. For at a time when Bermuda has had many changes, St. David’s was that part of it which was spoken of as not having changed. Bermudians would direct the visitors thither, should he seek to find Bermuda as Bermuda once was many years ago, before the commercial aspects of Bermudian life moved from the sea onto the land, following the growth of the tourist industry. There are many Bermudians to whom a short holiday there remains still as a physical tonic and an enlivenment of the spirit.