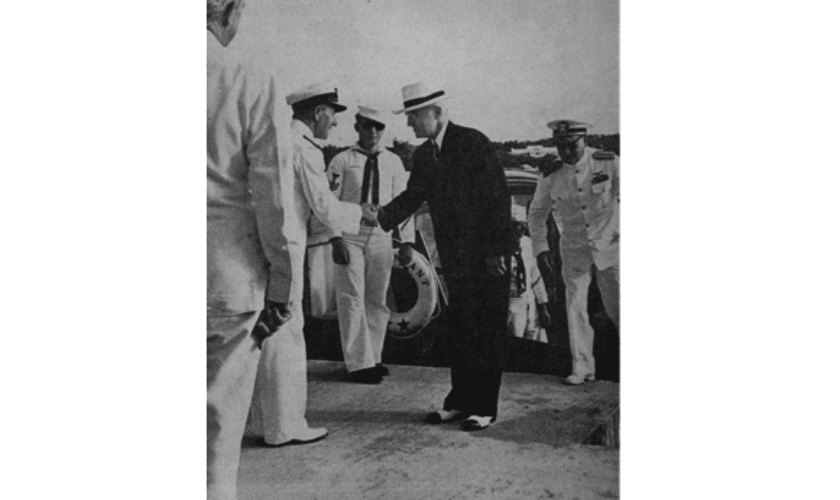 This article was taken from our archives. It first appeared in the October 1946 issue of The Bermudian. It appears here exactly as it did originally.

History was made on August 22nd when President Truman stepped ashore in Bermuda, being the first Chief Executive of the United States to do so whilst in office, though Presidents Woodrow Wilson and William Howard Taft both visited the Island.

It is also known that the late lamented Franklin D. Roosevelt planned a holiday here but illness caused a change of plans.

The secret of the “Journey to Nowhere” had been well kept, for news of the President’s choice of Bermuda was not known until the evening before, but His Excellency the Governor, at an Investiture Ceremony the morning of his arrival, notified those present that the President was coming for “rest and relaxation” and he trusted he would find them. “Don’t rush him off his feed” pleaded the Governor.

The Presidential party arrived in the Williamsburg, accompanied by the U.S.S. Weiss, which anchored off the N.O.B., at the southern end of the Little Sound. Mr. Clay Merrell, the U.S. Consul General, accompanied by Rear Admiral Henderson, greeted the President, and later His Excellency the Governor officially called upon the Chief Executive. The greetings of the Commander-in-Chief of the Royal Navy’s North American and West Indies Station had already been conveyed.

The President returned the Governor’s call later in the afternoon and was greeted by a large crowd as he landed. A typical incident occurred when an American lady, Mrs. Rich of Bridgeport, Conn., stepped forward and asked if she could shake hands with the President, who smilingly obliged.

During the eight-day stay in Bermuda the President visited many points of interest, the most prominent of which was the old and historic St. George’s Church, where he spent much time inspecting the valuable records, and the Masonic Lodge, formerly the State House, where he signed the ceremonial Bible.

On being told that the original fly leaf containing the signature of George Washington had been soled some thirty years previous by a souvenir hunter, he smilingly said he hoped history would not be repeated.

He also attended Divine Service at the Cathedral and listened with much interest to the sermon by His Lordship the Bishop, afterwards remarking that it was a very fine sermon. After the service the many visiting newspapermen enjoyed a talk with the Bishop.

During his stay in Bermuda the President’s chief recreations were swimming and fishing, though he had to be persuaded to indulge in the latter by his old friend George E. Allen, U.S. Reconstruction Finance Corporation Director.

On the first fishing trip the laugh was on the expert fisherman, for the President was the only one to land a fish, three to be exact.

“If he really puts his mind to it” observed Major General H. H. Vaughan, the President’s Military Aide, “he could bring up a Superintendent of Education,” the joke being that one of the three fish caught was a “schoolmaster.”

Gratifying as it was to hear the President, after being here but for a very short time, declare that Bermuda was a perfect place for rest and relaxation, it was even more gratifying to hear him say at the end of his visit that his highest expectations had more than been realized that that he hoped to return.

Though the President was here for rest, he did keep in touch with high officials and had several telephone conversations with Mr. Byrnes, but details were not given the press party. Incidentally, it should be put on record that Mr. Charles, Ross, the President’s Press Secretary was a tower of strength to the visiting and local newspapermen and he was ever ready to explain details and to afford any information available.

On Thursday, August 29th, on the eve of the departure of the President, His Excellency the Governor, the British Naval Commander, members of the Executive Council and other officials went aboard the Williamsburg to bid farewell to Mr. Truman.  The Governor was accompanied by his A.D.C.; Vice Admiral Sir Irvine Glennie, C.-in-C., America and West Indies Station, and his Flag Lieutenant, were also received aboard the Presidential yacht, as were the Hon. N. B. Dill, M.C.P.; the Hon. J. W. Cox, M.C.P.; the Hon. H. J. Tucker, Jr., M.C.P.; The Hon. J. Trounsell Gilbert; Sir Howard Trott, M.C.P.; Mr. Eldon H. Trimingham, M.C.P.; Rear Admiral George H. Henderson, Commandant, U.S. Naval Operating Base; Captain W. K. Rhodes, Aide to Admiral Henderson; Mr. Clay Merrell, Officer in Charge of the U.S. Consulate General, and his assistant, Mr. Earle J. Richey; Lieut. Commander Charles E. Nelson, skipper of the U.S.S. Weiss, and Colonel Cecil Henry, Commanding Officer of the U.S. Army Base at Fort Bell, went on board the Presidential yacht to say farewell, and afterwards the following messages were exchanged between His Excellency the Governor, Admiral Sir Ralph Leatham, K.C.B., and the President.

From the Governor to Mr. Truman: “We have deemed it a great honor that you chose Bermuda for you holiday, and hope that its restful beauty has come up to your expectations.

“We will always remember that you were the first President in Office to visit our Colony, and hope that you will honor us again. In the meantime we extend to you our very best wishes.”

To this message the President replied: “Thank you very much for your kind message. Everyone aboard enjoyed immensely our visit to Bermuda, and hope to come back.

“Please express my appreciation to the inhabitants of Bermuda for all their courtesy. My very best wishes to you.”
Bermuda is indeed honoured by the President’s visit.