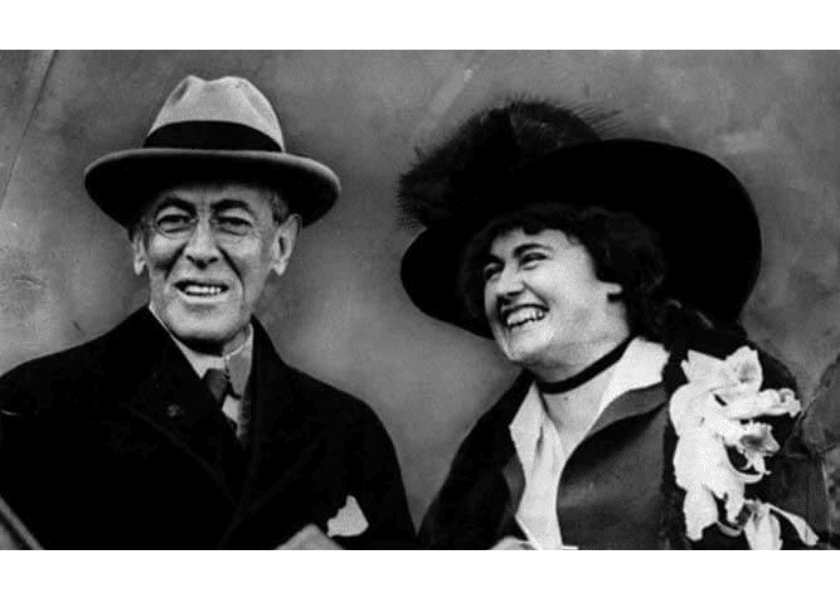 The President Who Loved Bermuda

Probably no one in its long history ever loved Bermuda more than Woodrow Wilson, the twenty-eighth President of the United States. Many other great and famous people have surrendered to the charm of the islands, but none ever needed their restfulness more than he and none ever felt more keenly than he their peace and repose.

“At last we are away from the crowd down here in this calm clear land,” he once wrote, “where it seems possible to detach oneself from all kinds of distracting thoughts and think freely again.”

He spoke of one sojourn in Bermuda as a stay which “cleared the mind” and “set the spirit free” and constituted “four weeks of unmixed blessings.” Wilson visited the islands four times. He came while he was president of Princeton in January, 1907, in the same month in 1908 and in February, 1910. His last trip was after his election to the Presidency of the United States in November, 1912.

Each of these trips followed a period of great emotional stress in Wilson’s life. He was an intense man who drove himself relentlessly, and the fierce tenacity with which he held to his principles and fought those who opposed him necessarily took a terrific toll of his physical and nervous resources. It was during one of these struggles in the course of his attempts to democratize Princeton (the abolition of the club system) that he first discovered Bermuda.

Although he arrived in January, he wrote: “It is mid-June here, warm and soft and languid, the white limestone houses and white streets shining intensely in the vivid sun and everybody in summer garb . . . Nations and all big affairs of whatever kind seem here remote and theoretical. What have we to do with such things on this little island far out at sea?”

Apparently Wilson found relaxation in change rather than in repose for it was on this trip that he prepared a series of lectures which became “Constitutional Government in the United States” and he twice occupied the pulpits of Bermudian churches, speaking once on the text, “The letter killeth, the spirit giveth life.”

A year later while continuing his fight for educational reforms he was carrying on the heavy duties of head of the university and preparing and delivering addresses all over the United States. The strain of such labor once more proved too great and again he found “most soothing rest” in Bermuda. This year he stayed at the Hamilton Hotel. It was on this occasion that he met Mark Twain and wrote to Mrs. Wilson:
“Mark Twain has been down here between boats and I have seen a good deal of him.” They met at luncheon with “a most interesting little group of garrison people.” Wilson found that the famous author “was in great form and delighted everybody.” The college president saw the Connecticut Yankee frequently. They joined in a petition to the Colonial Parliament prepared by Wilson which requested that the fearsome “Scarlet Runner” automobile be outlawed. They engaged in frequent putting contests on the lawn of Bay House on Pitts Bay, the home of the late Mr. W. H. Allen, then the American vice-consul.

The third visit came after the disastrous defeat of Wilson’s plan to establish a graduate college on the campus of Princeton. “On February 14 (1910) Wilson utterly worn out with the strain of battle, both physical and emotional, sailed for Bermuda for a short rest.” Once again “the charm of the place, the quietude, the friendly people—and more than all else, his work in clarifying his mind through the preparation of several articles and addresses—brought restoration.”

The last visit came in 1912 when he was President-elect. After the turmoil and strife of the nominating convention and the campaign, he had again chosen Bermuda as his “place of escape.” He sailed on November 14th, ten days after his election, making the voyage as nearly private as possible. Only his family, a single private secretary and the inevitable secret service attendants accompanied him. He stayed at Glen Cove (later Glencoe) at Salt Kettle, Paget, which was “free to the mind, open to the sun.”

His daughter, Eleanor McAdoo later wrote of the house “. . . its restfulness was reassuring. An attractive little white house with heavy green shutters, it had a wide verandah from which Jessie [another daughter] and I could jump straight into the blue waters of the bay.”

During this visit the President-elect attended a session of the Colonial Parliament and a state dinner and made two brief addresses.

It is no wonder that Wilson came to love Bermuda with passion born of frustration in his imprisonment in public life. He once expressed this feeling with characteristic incision: “Every private comfort and satisfaction (for example and chief of all, the freedom to go to Bermuda) is destroyed and broken up and one’s life is made to turn upon public affairs altogether.”
It was not only for its weather, its scenic beauty and its architecture that Wilson loved Bermuda. It was here in 1907 that he met Mrs. Mary A. Peck and formed one of the great friendships of his life.

His emotional temperament demanded the sympathetic response of feminine friendship. He found this response with his first and second wives, but also in warm and yet platonic relationships with several women. Of these the most intimate was that with Mrs. Peck. In the course of the correspondence from 1907 to 1915, he wrote two hundred and twenty-one letters which survive, for a time sending one almost every Sunday. His biographer, Ray Stannard Baker, found that these letters were “the largest in number” that he examined and that they contained “much of personal revelation.”

Wilson described their meeting “. . . how you first flashed, a radiant vision, on Bermuda ken” and the whole where she was staying, “Inwood with the very spirit of peace resting upon it.”

Mrs. Peck was a vivid figure in Bermuda society. She had been born Mary Allen and had come originally from Duluth, Minnesota. She had been married to a Mr. Hulbert when quite young and her first husband had been killed in an accident. She later married Thomas D. Peck, an older widower with several daughters, whose textile business kept him generally in Pittsfield, Massachusetts. Her various homes in the islands were gathering places for interesting people.

It was through Mrs. Peck that Wilson met Mark Twain and he wrote to Mrs. Wilson that “[Mrs. Peck] seems to know everybody that is worth knowing. She has been coming down here a great many winters and everybody turns up [at her house] sooner or later, it would seem. Wilson visited her at Inwood in 1907, at Shoreby in 1908 and at Glen Cove in 1910.

Another Wilson biographer, Jonathan Daniels, describes her as “undoubtedly a charming woman.” He speaks of “a photograph of her standing, slim and gay in a wide sweeping skirt on the porch of her cottage in Bermuda where Wilson first met her, in 1908 [sic], when he went to the island alone for rest.” He adds that when the Pecks were divorced in 1912, “gossips thought that the action might have been instituted because she expected to marry the British Governor of Bermuda who, like Wilson, was certainly her friend.”

As time went by, the friendship between Wilson and Mrs. Peck deepened and after the death of the first Mrs. Wilson, other gossips in Washington were betting, after her visit to the White House on Memorial Day, 1915, that she would be the new mistress of the Presidential mansion, but Wilson’s engagement to Mrs. Galt was announced in October of the same year.
Thereafter Mrs. Peck ceased to play a part in Wilson’s life and she departed to increasing financial troubles and deepening misfortune, eventually being forced to sell her Nantucket house, her personal effects and her memoirs but “preserving to the last some beautiful lace which she told a friend had been intended for her dress at her wedding in the White House.”

She attained some prominence behind the scenes in the 1916 campaign when Wilson’s enemies broadcast false and invidious stories about their relations and tried to use her penury to obtain the letters he had written her.

Mrs. Peck met Wilson for the last time in September of 1919, shortly before his collapse, when she was invited to luncheon in Los Angeles with the President and Mrs. Wilson. Mrs. Wilson later wrote of Mrs. Peck as a “faded, sweet-looking woman” and Mrs. Peck thought Mrs. Wilson “junoesque, but handsome, with a charming smile that revealed her strong, white teeth.”  The occasion was somewhat less than delightful.

Both Wilson and Mrs. Peck have gone, but Bermuda remains to exercise on others the charm it held for the great American President. It is most appropriate that the picturesque cottages where he spent his hard-won happy hours harbor many of his compatriots who come each year to his “place of escape.”